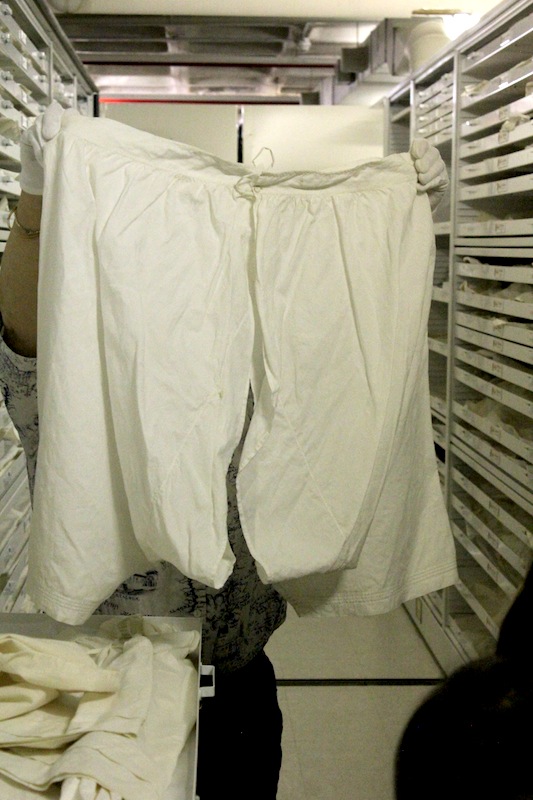 Glenbow’s Victoria’s Secret and Other Oddities

From royal underthings to toy torture-devices, what the Glenbow keeps in its storage might surprise you.

Philanthropist Eric Harvie established the Glenbow museum foundation in 1954 in an effort to share his good fortune with the people of Alberta. Eventually he donated his vast collection of art, artifacts and cultural curios to the people of Calgary in 1966. Among the paintings and pottery, there are a number of items that may strike the average museum-goer as out of place for a museum in Western Canada.

Perhaps the most famous bit of lace in the Glenbow’s collection, Queen Victoria’s underthings is a sight to see. A stout woman, the sheer width of her underwear is impressive (when National Geographic‘s Andrew Evans saw them, he guessed Victoria’s waist to be around 50 inches)!

Tucked away in the waistline of the garment, you can find the queen’s initials, so any who came across it knew whose things they were handling.

The closest thing to meeting the Queen herself, this model was used to display the various royal wardrobes during exhibits, though now it mostly serves to spook the night shift workers.

This turn of the last century coin-operated “Gipsy Fortune Teller” came with a number of fortunes.

For a penny, she would tell you what the (generally positive) future held for you, with rhymes like these:

I see you want your fortune told
Well, you are not too young nor yet too old.
You are deeply in love (now don’t think me bold),
With a very nice person who has silver and gold.

Coin-operated banks were all the range in the 1890s, and the Glenbow has an interesting assortment, including a dentist pulling teeth, Jonah and the Whale and some very un-P.C. heads we won’t show you. In case you were curious, you can see how it works in this video.

Among the sizable toy collection are some relatively new fare, like Transformers, 80s TV show memorabilia and even a copy of the original Mortal Kombat video game from 1992.

The museum has a vested interest in acquiring pieces that will someday be history, like this fake tombstone used to protest the 28th G8 Summit in Kananaskis.

A collection of torture devices from various eras can also be found in the backroom, with everything from toy iron maidens…

A collection of wartime artifacts made by soldiers from common objects, often referred to as trench art, contains things like this pen holder made from bullets.

This stylized car by artist Michael Nicoll Yahgulanaas, titled Pedal to the Meddle, has been resting comfortably in the upper floor of the Glenbow since 2009, surely winning the “longest you can park a car downtown without getting a ticket” contest. Some pieces, like giant totem poles and canoes, are even larger than this, and have to be stored off-site.

If you think these pieces are odd, according to Aritha Van Herk’s Mavericks: an Incorrigible History of Alberta, the museum’s collection at one time contained not only the first Ford Model T ever built, but real shrunken heads as well. Due to current laws regarding human remains, the Glenbow can’t speak to whether these last items are still stored in the museum or not, so you’ll have to make due with the thousands of other pieces instead. Did we mention they have a glass eyeball collection?