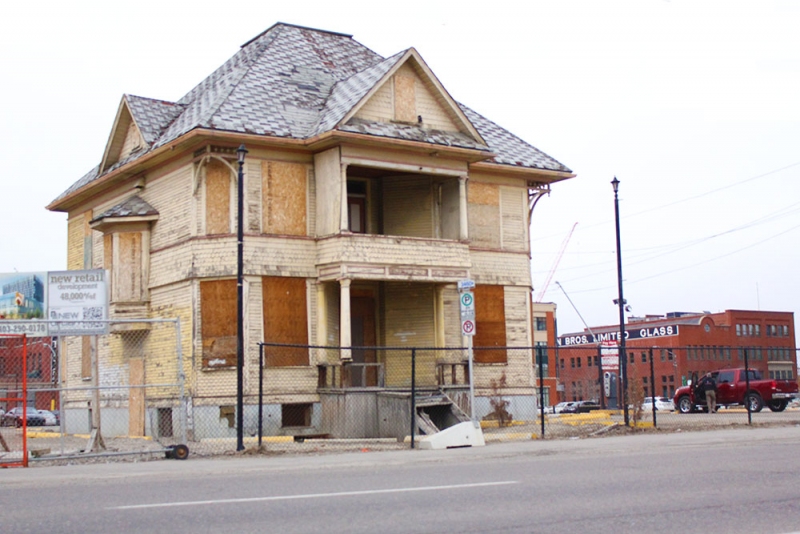 Update: On February 2, 2019, this building was destroyed in a fire. It is owned by the Calgary Municipal Land Corporation who acquired the home in April 2017. CMLC had completed assessments on the building and made recommendations for how it could be saved, but no long-term plans for the building had been approved. We were given the opportunity to tour the Enoch House in 2015 when it was owned by New Urban Consulting. The photographs and story that follow are from that tour.

The big yellow house in Victoria Park on Macleod trail and 12 Avenue S.E. seems out of place to most people who drive by, more haunted house than heritage building, but it’s actually one of the few remaining homes of its kind in Calgary.

Built in 1905 by Enoch Samuel Sales, it is one of the last pre-First World War homes in the area. Sales, who moved to the city from Kent, Ontario was the owner of the Sales Clothing Company, and lived in the house until he passed away at 71 on November 19, 1930.

Kept in the Sales family until the 1940s, the house has been repurposed a number of times, first becoming a boarding house, then a series of apartments.

It’s built in the Queen Anne Revival style which was popular at the end of the 19th and first decades of the 20th century. Interesting architectural features include stained glass windows, classic columns, solid-wood doors with glazed transom windows and front and side facing gable walls. The interior evidences the multitude of residents who’ve redecorated, with several layers of wallpaper and floor tiling visible thanks to the damage suffered by the house over the years, including fires, flooding and squatters taking up residence there.

Ideas floated as possible future uses include turning the house into a restaurant or an office space. Left vacant and boarded up by New Urban Consulting the owners in 2015, the house, which does not have any historical designation despite being on the desired list, still has an uncertain future. “If it was a perfect world, it would go next door where it was planned to go, you’d restore it and turn it into a small office, or something that could use the rooms effectively and not lose the fabric of the house,” says New Urban Consulting CEO Dan Van Leeuwen. “That would be the best case scenario. The worst-case scenario is it would have to be demolished. The range is between those two things.” 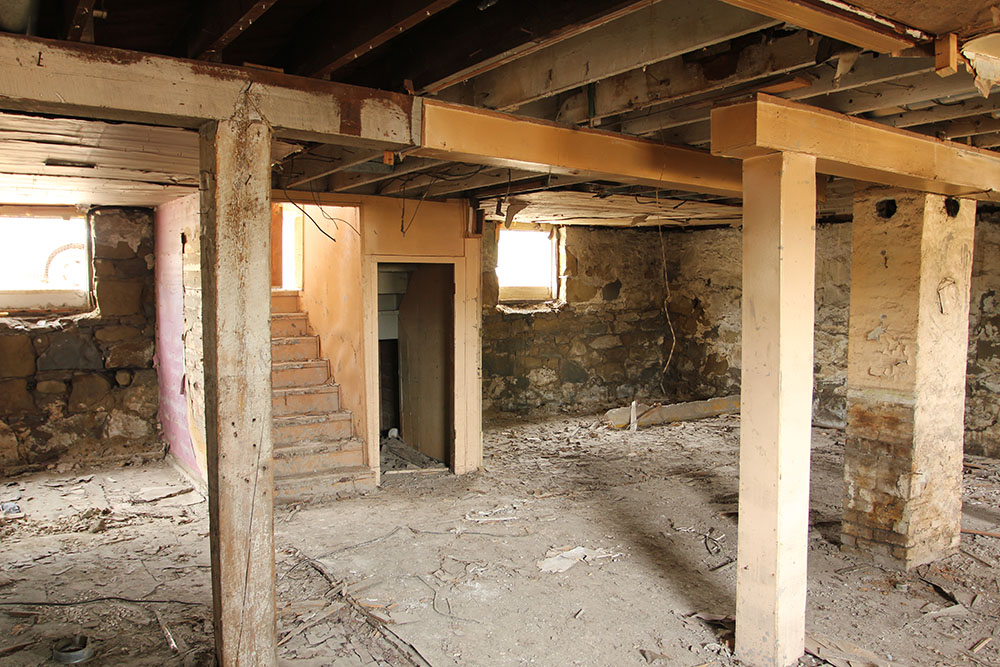 The basement suffered some damage during the 2013 flood, but much of its foundation, including original supports, is intact. 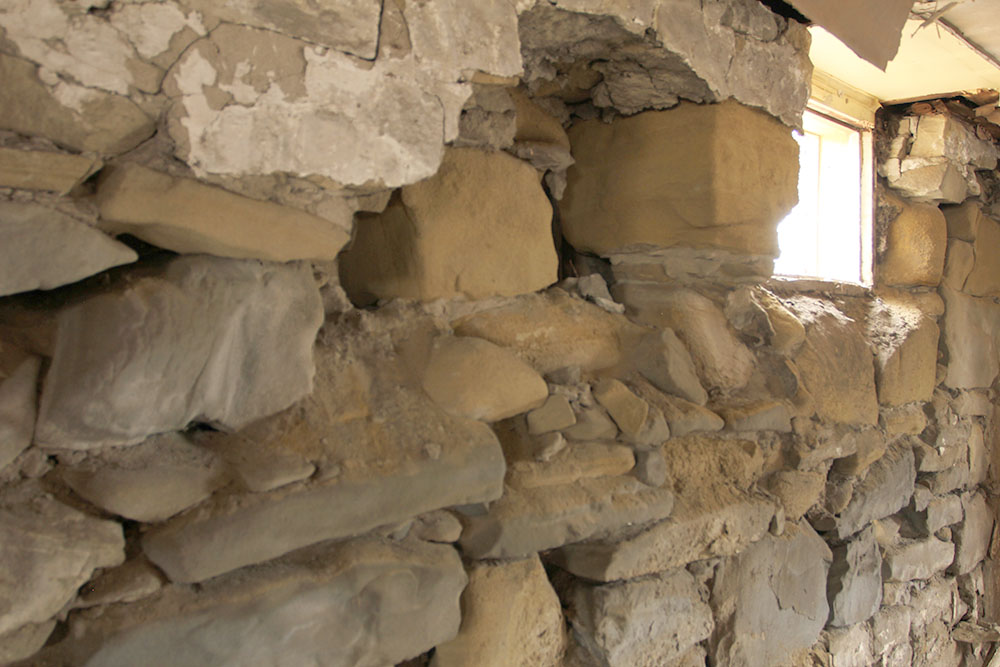 A trench dug out and filled with concrete and sandstone chunks, the foundation was built in typical fashion for the time. 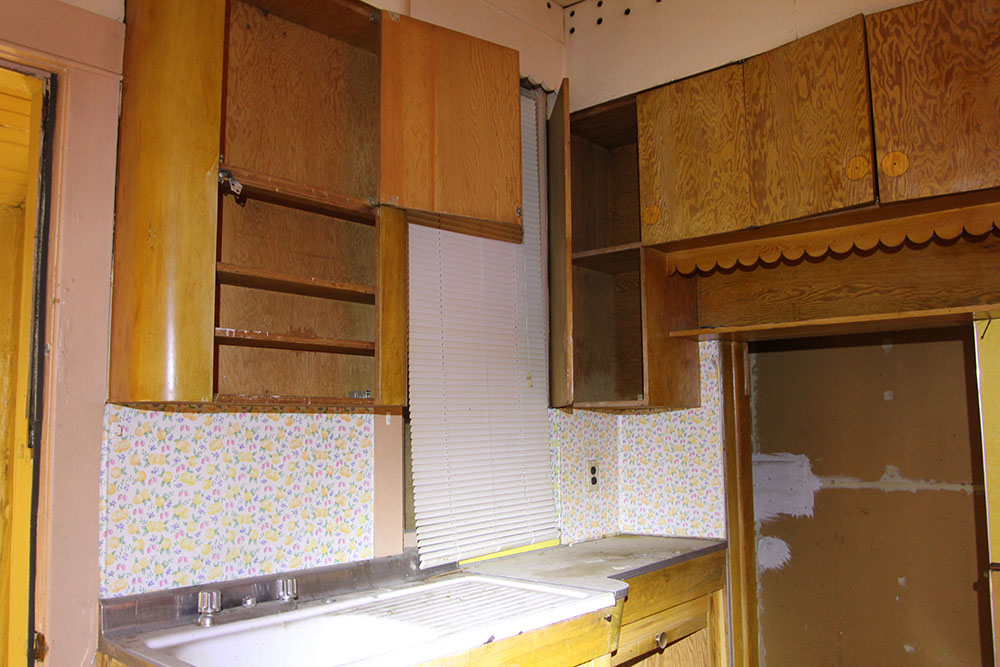 The first floor kitchen still has some original fixtures of the house. 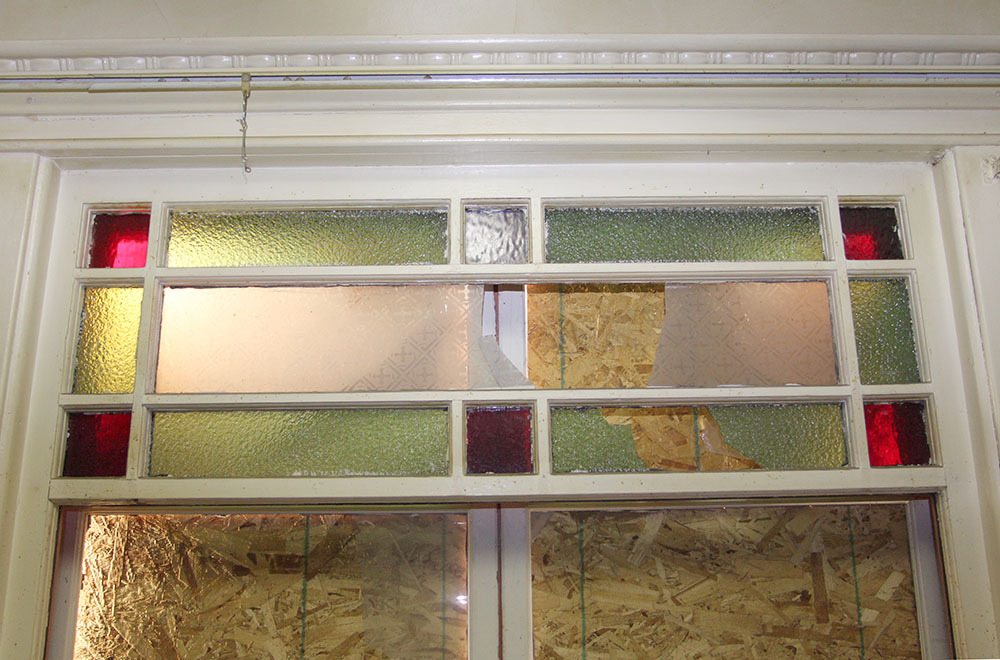 Many of the windows in the home retain their original stained glass accents, though this one has seen better days. 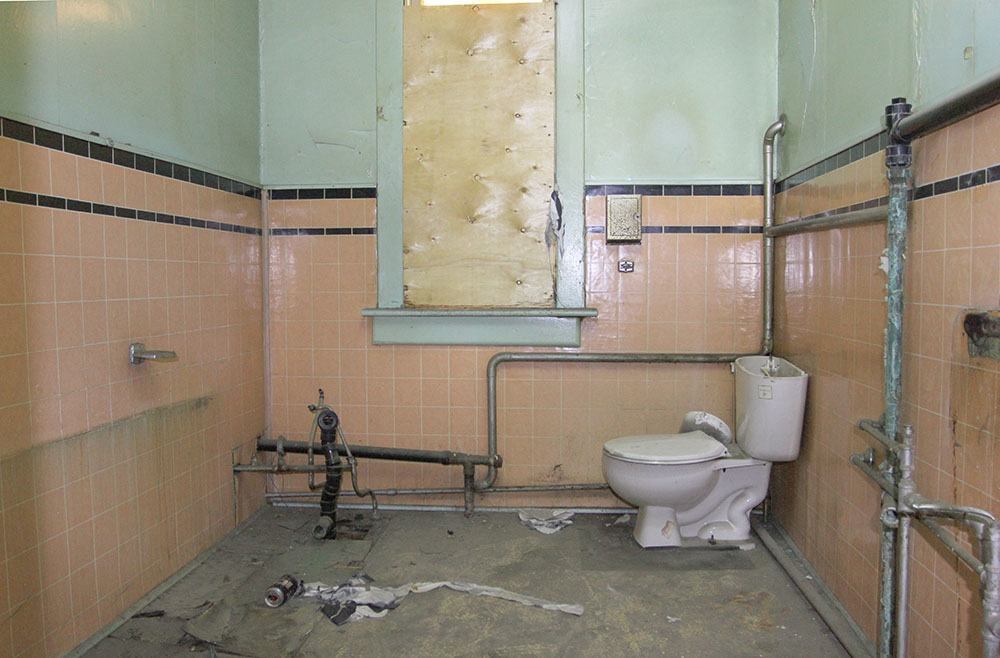 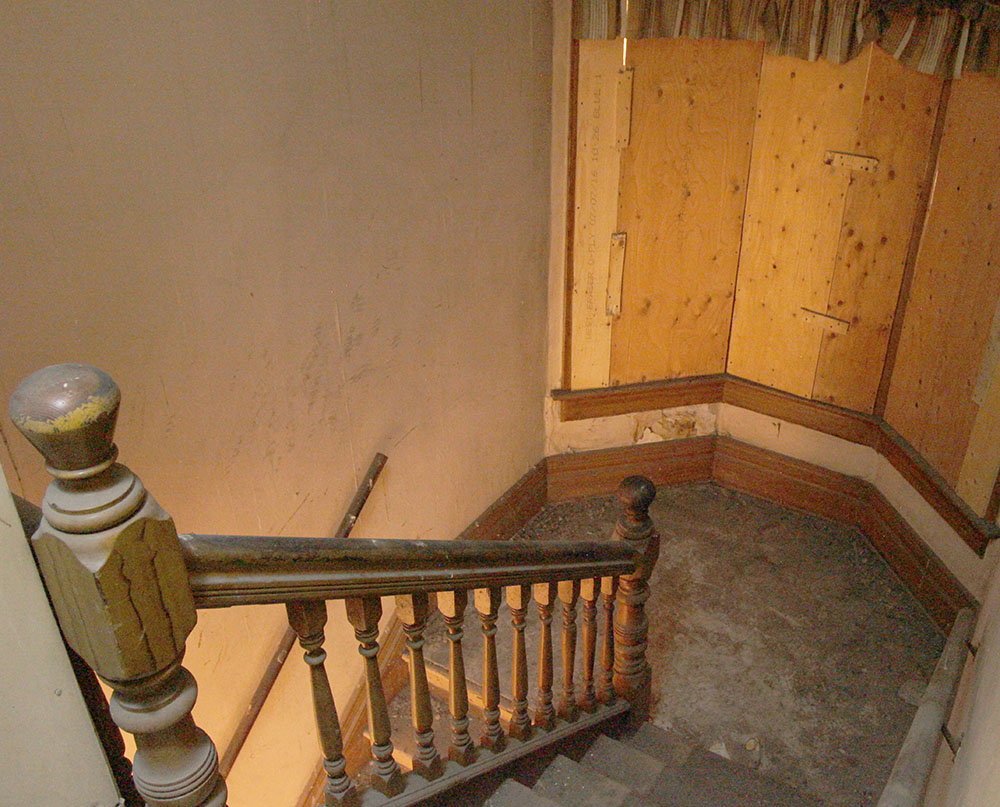 Much of the original wood railings and stairs have been preserved in the house. 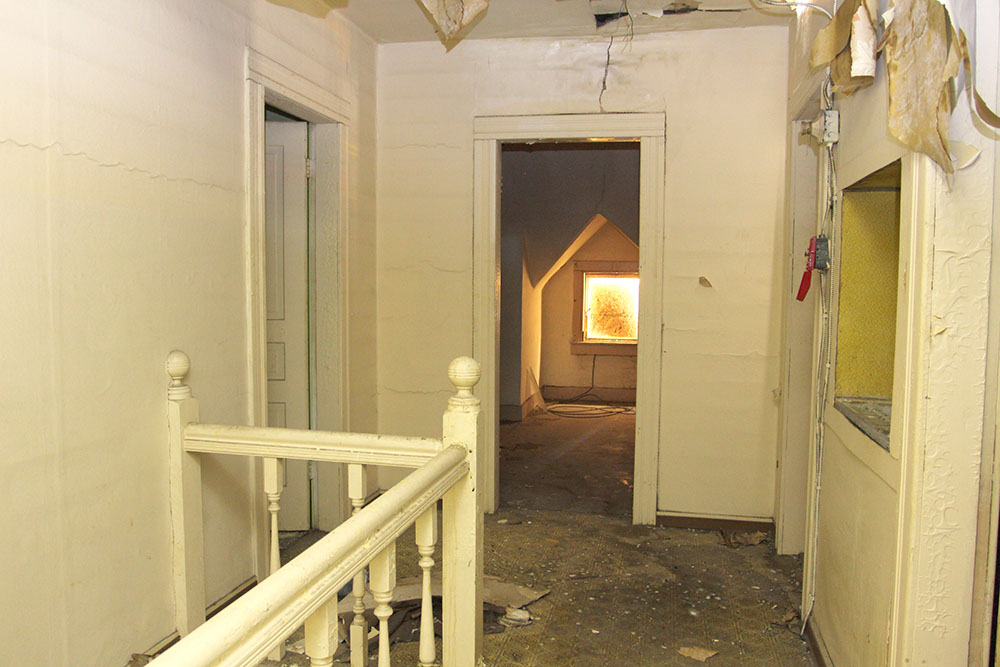 The top of the stairs on the third floor. 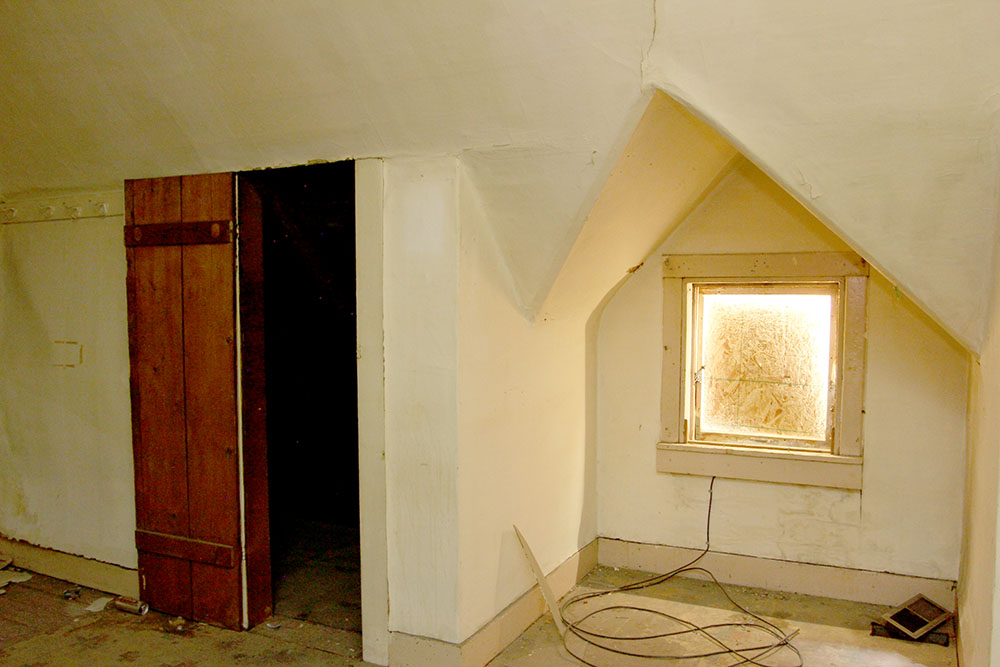 One of the smaller rooms that was eventually converted into an apartment. The wooden door on the right leads right under the roof’s paneling. 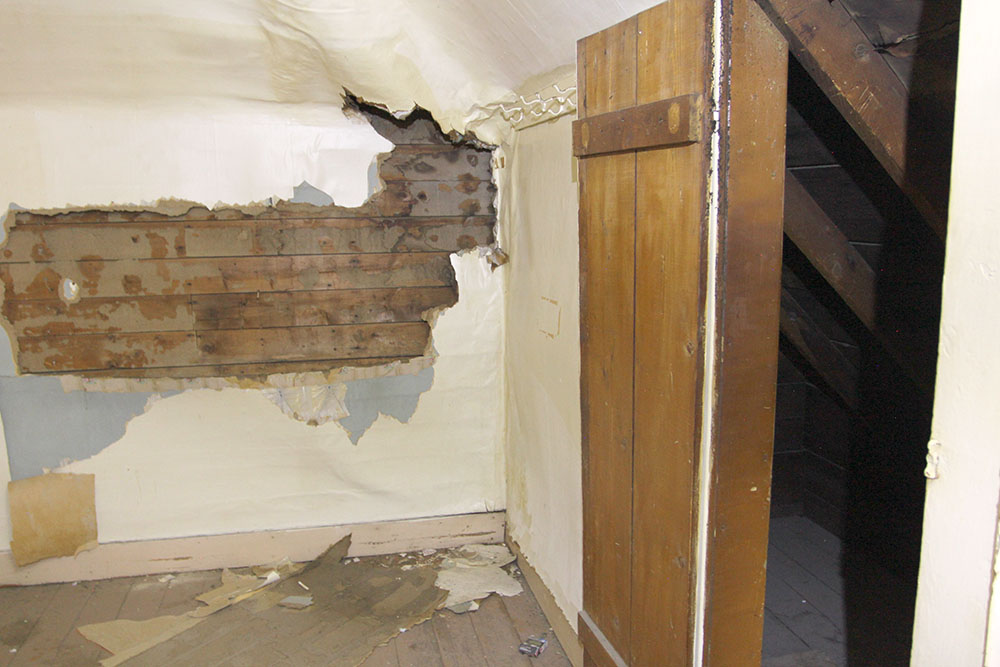 Time and environmental hazards have worn away at certain sections of the house more than others. 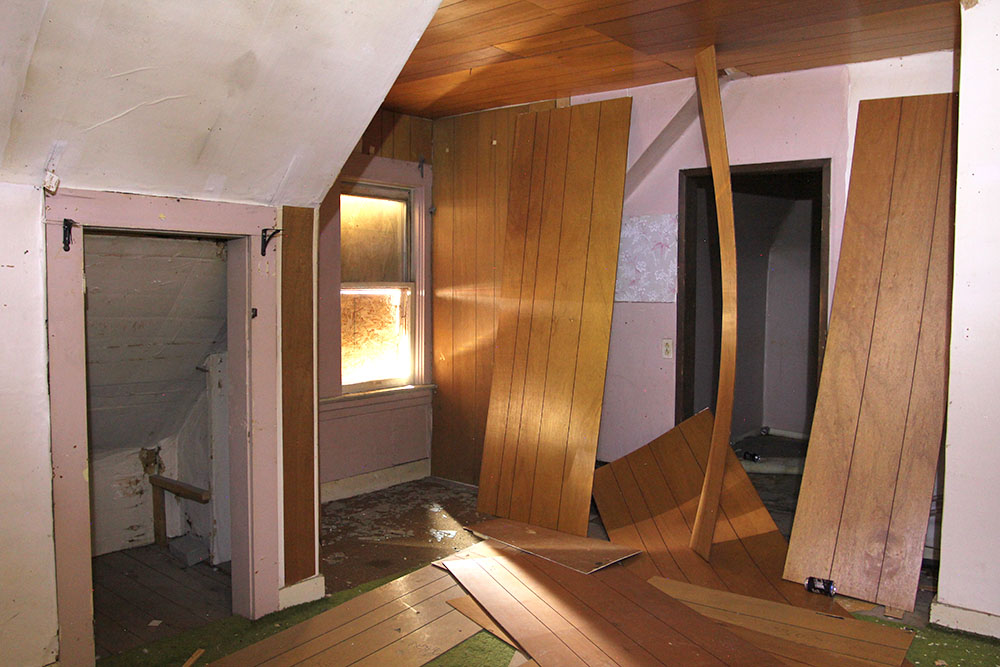 This room on the third floor was filled with stripped ceiling panels. 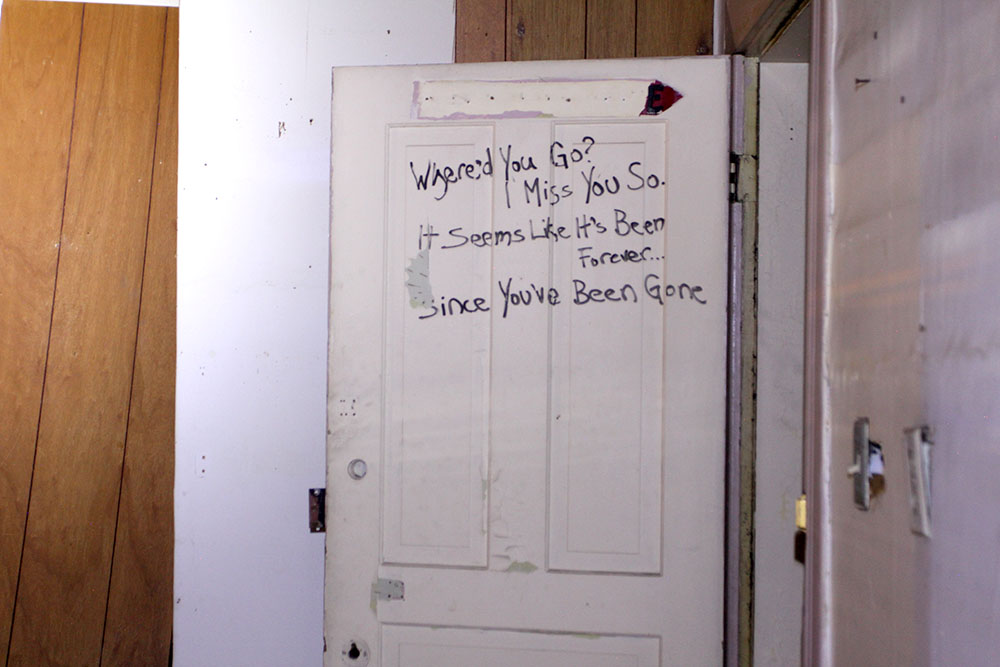 One of several messages left by squatters in the century-old home.