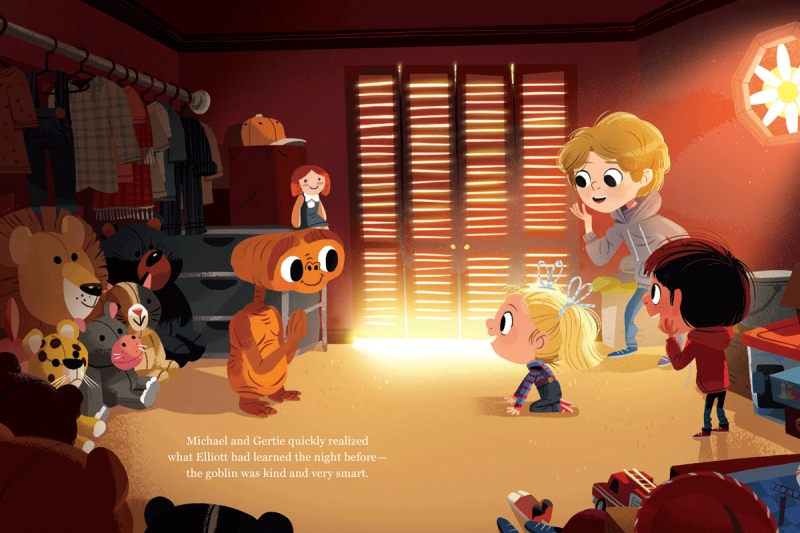 An illustration by Kim Smith from the kids' book based on the movie E.T., the Extra-Terrestrial.
A lot has changed since the 1980s and 1990s. Advancements in technology allow today’s kids to experience the world through different media than their parents did. But as so many classic books become movies, a Calgary woman is bucking the trend and turning classic movies and TV shows into storybooks.

Kim Smith is the official illustrator for Quirk Books’ Pop Classic Picture Book series. Her children’s book treatment of Home Alone, released in 2015, has sold more than 100,000 copies. Since then, Smith has also brought to life such modern classics as Back to the Future, E.T., the Extra-Terrestrial and The X-Files, and has a Buffy the Vampire Slayer book coming out this month. “The Buffy project was fun because I loved the show in high school. It felt like I was doing fan art,” says Smith.

As a fan of many of the source materials, Smith incorporates things she loves into her illustrations – Buffy’s necklace from season one or E.T.‘s distinct lighting scheme, for example.

As Smith knows, a picture is worth a thousand words – and in the case of her books, some of those words are in French. The rights to the Home Alone book have also been sold in Albania, Latvia, Hungary, Macedonia, Russia and Serbia.

Along with bridging a culture gap, the books also play a unique role in overcoming a generational gap, particularly if the source material is a bit scary in parts. “Parents are hesitant to introduce their children to something like E.T. because it freaked them out when they were young,” Smith says, though this isn’t always the case. “A second-grader came up to me and said, ‘I’ve seen all four X-File movies!'” she says. “I was pretty shocked.”

But the kids aren’t the only ones showing up for pop-culture storytime. “Even adults who aren’t parents are getting excited about the books,” Smith says. “I think it’s the nostalgia factor.” Aparently director Steven Spielberg has gotten in on the action. “Someone showed him the E.T. book,” Smith says. “He sent my publisher a signed copy, which they gave me!”

To see more of Kim Smith’s work go to kimillustration.com.