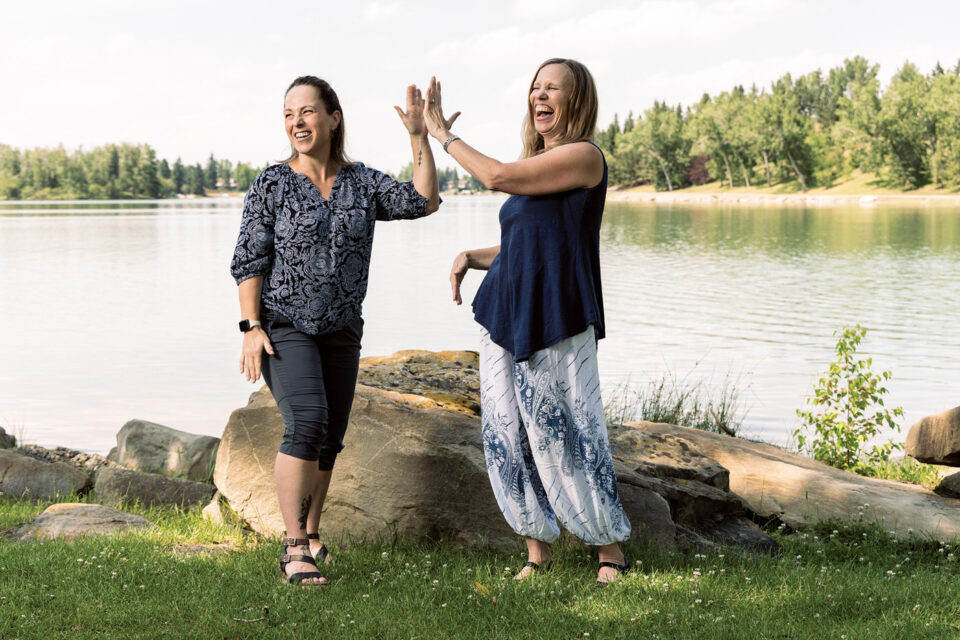 As the pandemic secluded us in our homes, it reinforced the need for connection with our neighbours. For two women in southeast Calgary, it also reinforced their commitment to the grassroots volunteer movement they started in pre-COVID times.

Crystal Milne and Julie Kyliuk are the respective founders of Bonavista Cares and Parkland Cares — sister organizations that promote community-building and caring. Kyliuk, a born-and-raised Calgarian, and Milne, a transplanted Ontarian, became friends in the most Canadian of ways: their kids played on the same minor hockey team.

Milne started dreaming up what would eventually become Bonavista Cares while she and her family were temporarily relocated to the U.S. During that time, she looked for a volunteer opportunity that could include her three kids but kept coming up short since they were always too young to participate.

That desire to do volunteer work as a family stayed with her upon returning to Calgary. When she learned that others in her community of Lake Bonavista shared this desire (and frustration with age limitations) Bonavista Cares was born in 2015.

Kyliuk also took to Milne’s idea, seeing it as something she could adapt to her community of Parkland. With the city starting to feel the economic effects of a slump in oil prices, Kyliuk recognized a growing need for community members to support one another. “I know from experience that stress can make people internalize and isolate,” she says. “I figured that being a part of a community group that helped others might combat the negativity and worry.”

Bonavista Cares’ inaugural project was a Christmas Adopt-a-Family, while Parkland Cares launched with a food drive. Both organizations continued to operate throughout varying degrees of COVID-related restrictions on gatherings. Bonavista Cares fundraised to purchase $15 gift cards for front-line workers in businesses serving the community and delivered them with thank-you cards signed by community members.

Both Bonavista Cares and Parkland Cares also continued to compile birthday-parties-in-a-bag for the Calgary Food Bank throughout the pandemic, with over 200 bags donated in the past year.

The informal nature of the groups is sometimes the biggest challenge, with some events drawing only a handful of volunteers and others delivering overwhelming numbers. But Milne takes it in stride. “With everything that we do, if we get three people or if we get 300 people, it doesn’t matter to me because I really believe that everything builds community,” she says. And while she acknowledges that it’s much easier to simply donate money to various efforts and causes, that misses one of the key ideals put forth by Bonavista Cares and Parkland Cares — to instill the value of community-building and caring in their kids. These kinds of community initiatives are more vital than ever right now and both women hope to inspire others to start their own Cares-style volunteer groups across the city.