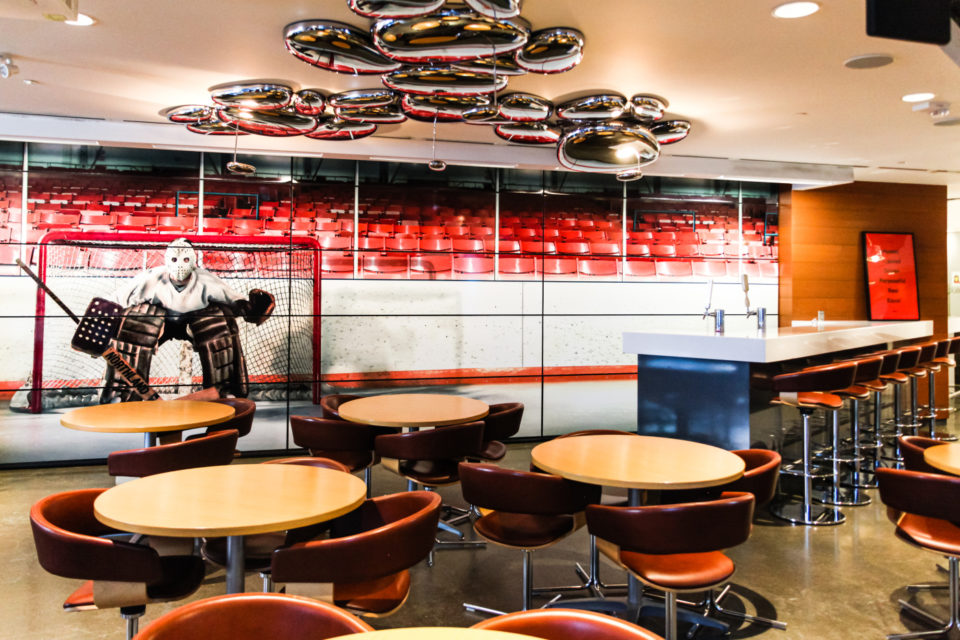 Number of staff: 275 in the Calgary office.

Founded in Calgary in 1996, Critical Mass is a global digital experience design agency with 12 offices across the world. Around eight years ago, the company’s Calgary team moved into Inglewood’s new Atlantic Avenue Art Bock building, becoming the first (and only) third floor tenants. As a result, the office space was custom designed for Critical Mass, creating a professional space that addresses the company’s need to connect worldwide while fostering an inclusive and fun work environment for the staff.

The Calgary office’s open work space allows for collaboration amongst the staff, while those who need to connect with clients and offices in other cities or work more privately can take advantage of the office’s several soundproof “Just in Time” rooms, formal meeting rooms and private phone booths.

The office is filled with the staff’s design work, bringing extra splashes of colour to walls, meeting rooms and more. An office scotch club, games and team events like weekly office breakfasts add to the fun and creative work environment.

“We just want people to feel comfortable and the balance of informality and formality. You want to work with people you like, but you want to advance your career. You want to work hard. You want to have some fun. And that’s what we’re always trying to do,” says Chris Gokiert, president of Critical Mass.

“At the end of the day, it’s just a building, but we want it to nurture a sense of belonging that we have.”

Critical Mass’s Calgary office is located in the same building as local businesses and art galleries like the Esker Foundation, Gravity Espresso & Wine Bar, Bite, Limitless and more. The building features bike storage and shower facilities, and the halls are filled with art from the Esker Foundation.

Critical Mass fills both sides of the building’s third floor, though you’ll find the reception desk on the west side.

A life-size Star Wars stormtrooper greets guests at the reception desk. The figure was sent to Critical Mass as a surprise package after they worked with Nissan on a virtual reality project based on Rogue One: A Star Wars Story.

The office has several first-come, first-serve meeting rooms called “Just in Time” rooms, or JIT rooms for short. This one was designed to look like the Pilkington building, where the Calgary office used to reside before moving into its current space.

Several living plant walls add some greenery to the office.

Critical Mass staff have a sentence saying what they are inspired by in their email signatures. This JIT room is covered in some of their responses. “Mine’s about the endless energy of creativity, which was based from an experience I had at a Bruce Springsteen concert about 10 years ago,” Gokiert says.

Private phone booths that resemble red telephone boxes have been placed around the office for when staff need to take a private call. The screens on the booths flash tidbits of office news and countdowns to the weekly “beer o’clock.”

Critical Mass has 12 locations around the world, most of which are represented in this mural. There are landmarks representing Nashville, Los Angeles, London, New York City, Hong Kong, Toronto, Calgary and more.

The Met, a formal meeting room, is used for global meetings with other Critical Mass offices, orientations, community outreach events, speaking engagements, office activities and more. The walls and doors on either side open up to to fit a few hundred people.

This gathering space is known as the Public House. The hockey mural, which features a photo shot by the Critical Mass team at the Stampede Corral, opens up to The Met’s formal meeting room. This space is used for working, staff events and monthly town halls with themes ranging from Drake to Halloween. The office also offers breakfast in this space once a week, which could feature anything from overnight oats to breakfast sandwiches.

The Public House has kombucha and beer on tap and hosts a weekly “beer o’clock” event with snacks on Fridays at 3 p.m.

The Public House also has games like foosball, ping pong and Pop-a-Shot.

This JIT room is covered in robot artwork created by members of the Critical Mass team.

The company’s values — honest, inspired, driven, purposeful, real and equal — are showcased in red, framed images around the office.

This kitchen and break room features the office’s scotch club, which meets weekly to sample different scotches together.

The ledge behind the couch stores nearly 100 bottles of scotch that the club has tried over time.

[This story was updated to clarify that the Wander is the in-house production team at Critical Mass.]

Do you have a suggestion for a Calgary office we should feature next? Tell us what makes the office space notable and please supply a few photographs for reference. Let us know.