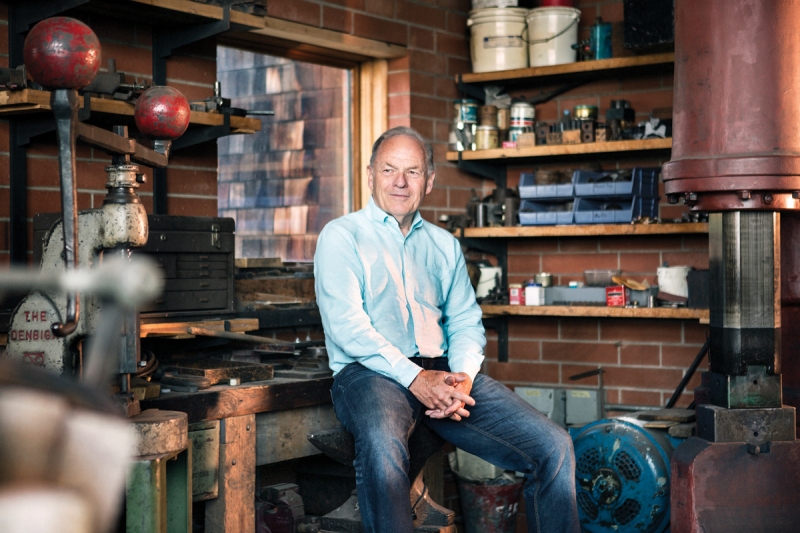 Ian MacGregor in the Canadian Museum of Making. Photograph by Jager & Kokemor.

When he was a little kid, Ian MacGregor would tag along with his dad to visit junkyards around Calgary on Saturday mornings. His father worked in the office at Barber machine shop and was looking for buyers for the shop’s scrap metal. MacGregor the younger was looking for gems in the junk and launching his lifelong passion for collecting “cool things.”

Over the following decades, MacGregor would amass enough cool things to necessitate and fill a private 20,000-square-foot underground museum. His trove, the Canadian Museum of Making in Cochrane, focuses on machinery from around the world, including an 1895 steam engine from an English weaving mill and tens of thousands of tools, from African metal-work tools to typewriters.

But back in the late ’50s MacGregor, founder and CEO of North West Refining, chairman of Enhance Energy, founder of the Museum of Making and developer of Carriag Ridge and M2, was a kid scouring auto wreckers including one in the East Village as his dad, Jack, talked to the proprietors. (Disclosure: after writing this profile, but prior to publication, the writer was hired by MacGregor to help promote Carriag Ridge.)

“Because they were trying to make friends with my dad to get the scrap, they would just let me take whatever I wanted,” he says with a grin. “So I would take a speedometer out of a car, or a clock, or steering box or something and take it home and take it apart. Then I just got in the habit that if it was really cool, I’d keep it.”

Despite having a museum of his own now, MacGregor’s collection runneth over and he has brought a few objects, including a well-used carpenter’s hammer from Cuba and a solar-powered seismic data collector, to his downtown Calgary office. Amid the curios and books there’s also a big framed photo of his late mother, Anna, as a young woman in a red sweater. He adored her. And he inherited at least some of her ingenuity. “My mom could make anything,” he says. Once she even built the winning entry in a contest to see the Ice Capades — a miniature model of the Stampede Corral complete with skaters on the ice and spectators in the stands.

Anna MacGregor’s family couldn’t afford to send her to university and she was determined her only child would get an education. “We lived in Renfrew, it was a working-class place and she decided nobody in Renfrew was going to university,” says MacGregor. “So she made my dad move to Brentwood because people who lived in Brentwood were people who would go to university.” It would seem that her plan paid off. MacGregor graduated from the University of Calgary with a mechanical engineering degree in 1971. He headed to the University of Alberta to do his Masters degree, but when a romance went south he did too, ditching grad school and coming back to Calgary to get to work in the oil-and-gas industry.

“Ian looked at the oil industry and he just saw it as a big complicated puzzle that he could solve,” says Tyler Trafford, a writer and friend of MacGregor’s from his university days. “He doesn’t think about ‘how do I make some money.’ He thinks, ‘how could I find a puzzle hard enough that it would be really difficult to do?’ That’s how he does everything. He really likes complicated problems. The more complicated, the more challenging, the more he loves them.”

The world has begun the complex and decades-long process of transitioning off fossil fuels, but in the shorter term, global demand for oil is increasing. MacGregor is determined that Alberta should maximize the profit it can get for its resources, while minimizing the environmental damage. “To maintain the things that we’ve got, like health care, education and infrastructure, you have to pay for them somehow,” he says. “[Canada] has a small population. We’re widely spread out. The only way we can pay for them is to dig things out of the ground or cut them down. We want to do that in the very best way we can, and make the very least impact on the environment, and fix it up as good as we can when we’ve left. [But] we still have to do it, otherwise it’s going to be cold and we aren’t going to be able to find a doctor.”

North West Refining partnered with Canadian Natural Resources (CNR) to build the new Sturgeon Refinery near Edmonton, which produced its first diesel late last year. The refinery is expected to reach full capacity this year, producing 80,000 barrels of diesel a day, and despite the drop in price of oil, Alberta producers who send their bitumen there stand to earn more than $20 extra on each barrel.

MacGregor wanted to add skilled jobs to the Alberta economy and more value to bitumen by turning diluted bitumen (dilbit) into more expensive diluent and diesel, rather than shipping the raw material elsewhere to be refined. The new refinery, the first one built in Canada in more than 30 years, also tackles another problem MacGregor saw coming long before pipelines started making headlines. “We thought pipelines are going to be really difficult to get approved, so you should use the pipelines we’ve got for the most economically dense material you can ship,” he says.  “Diesel is about three-and-a-half times as economically dense as dilbit, so if you use the same pipe for diesel, you can ship three-and-a-half-times as much money out,” he says.

This is the culmination of an idea that MacGregor had more than 15 years ago.

The Sturgeon Refinery also incorporates the world’s largest carbon capture and storage system (CCS) to pipe and pump the refinery’s CO2 emissions down into old wells across Alberta. It’s the first refinery in the world to be built with CCS included from the beginning. The refinery will supply an independent company with CO2 to be used in enhanced oil recovery, a process that injects CO2 into depleted wells to recover light oil trapped inside. The carbon stays in the ground and the valuable light oil comes out.

“It’s like a made-in-heaven opportunity because we know we have to mitigate CO2 and we are the only place in the world that has a use for prolific quantities of it,” says MacGregor. “Everywhere else is like ‘what do we with this stuff, how do we get rid of it?’ We’re like ‘give us more!’”

When complete, the CCS system will have the capacity to manage 10 times the refinery’s emissions. “We think everyone else is going to use it,” says MacGregor.

While North West and CNR each own 50 per cent of the refinery, the provincial government helped build it with a 30-year commitment to refine some of the bitumen the province collects in royalties there. The $5.7-billion price tag for phase one has ballooned to $9.5 billion and critics, including former provincial finance minister Ted Morton, have called the refinery a “boondoggle.” Morton and others have also characterized the government’s processing agreement with the refinery as being “effectively” a loan guarantee for the construction costs.

Initially Morton was a supporter of the project. “[MacGregor] was, I think, sincere in his statements that he thought more bitumen should be upgraded in Alberta and that the government wanted to do more, and he was willing to try and help in that. I think it was a mix of public-spiritness and self-interest,” says Morton. “But at the end of the day he wildly out-negotiated the Government of Alberta in terms of both the risk of construction costs and future markets for the product.”

Capital costs for building the refinery have nearly doubled, but interest rates are lower than expected, so in the end, the total refinery financing costs are coming in at about the same. “That was luck,” says MacGregor.

While he still spends most of his time on the refinery, MacGregor is setting his mind to his next big projects. One of those is organizing the players to build an open source library of big data from Canada’s primary industries — not only oil and gas, but also agriculture, mining, logging and fishing. “Somebody has to coordinate that effort, so I’ve decided that should be my job,” he says with a grin. Sharing this vast information, he believes, will help industry improve operations, reduce costs and protect the environment.

“He has semi-retired a couple of times and every time he ends up with something like the museum,” says his daughter, Kate MacGregor. “So, we try to encourage him not to have free time whenever possible.” An architect and civil engineer, Kate works on M2, a multi-use building east of the Simmons Building in the East Village, that Ian is an advisor for. She also works on Carriag Ridge, a series of homes her dad is developing in the foothills not far from the Museum of Making.

“I always thought this is one of the most beautiful places there is,” says MacGregor of the area north of Ghost Lake where his parents retired in 1977. “As I got lucky in my life I kept buying more land, and as I got enough of it, I thought, ‘I could have a subdivision.’”

MacGregor envisions a giant “park” of homes, each inspired by its particular landscape and designed by an acclaimed architect to be beautiful and to last for generations. He goes out to the first home in the development, Rock House, a couple of times a week to think, work and enjoy the view of the mountains. Designed by award-winning American architect James Cutler and nestled between giant sandstone formations, it was named “Best Cabin” by Wallpaper magazine in 2017.

While he happily discusses his favourite machinery, list of projects and his parents, MacGregor is also clear on what he will not talk about publicly. Namely, his wife (“she wouldn’t like that”) and his philanthropy.

Aside from his public support of Women Building Futures, a program that encourages women to pick up tools and work in the trades, MacGregor keeps his community work to himself. “It would be impossible to know 100 per cent of the stuff that Ian does because he would never tell you,” says Trafford of his friend’s philanthropy. “His dad in particular [believed] you just keep your mouth shut. You don’t make a big deal out of yourself. That’s very important in that family — you don’t make a big deal of yourself.”

And you don’t give up. “He always tells us when someone can’t do it, that just means that they can’t do it,” says Kate. “He always expects that everyone is going to give everything they’ve got solve a problem.”

Even his critics note his persistence and character. While Morton says their conflict over the refinery project “pretty much destroyed” their relationship, he also says, “as a person I thought Ian was one of the most intelligent, interesting and successful people I met in my eight years in government.”

Trafford, too, remembers being struck by MacGregor’s intelligence when they met in the late 1960s. Over the years he also learned to admire his friend’s determination.

“He’s essentially a very shy person,” says Trafford. “He was really shy at university. You have to admire him; he taught himself not to be. He taught himself how to interact like a regular guy. When you spend some time with him, you realize he’s not, really.”