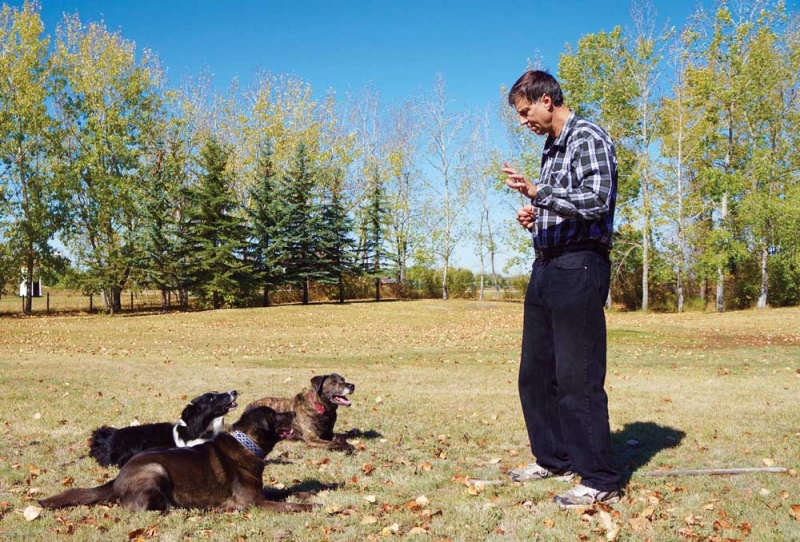 A retired Calgary Police Service officer and dog handler, he has worked with canines since 1977, including a stint as a breeder that sold dogs to police departments across North America.

St-Louis addresses all behavioural issues including excessive barking, poor recall, jumping, separation anxiety and more. However, dog owners often decide to call him when their four-legged companion has shown signs of aggression.

“People will put up with a lot if the dog is friendly,” says St-Louis. “But when it becomes aggressive, it ruins the human animal bond and folks want help addressing that.”

As a former member of the K9 unit, St-Louis is used to dealing with large assertive dogs. He understands why canine aggression occurs and how to deal with it.

“My toughest case was by far Carlo, my police dog,” says St-Louis. “I was Carlo’s third handler and he was on the verge of being removed from the Calgary Police Service’s K9 unit. That dog helped me become a better trainer. The cases I see today are very manageable thanks to my experience with Carlo.”

Carlo suffered from a high state of arousal, meaning he was overresponsive to stimulus, which St-Louis channeled into training for titles. By the time Carlo was three, he had earned eight titles including DPO II, a service dog examination used by many federal and military agencies, and Schutzhund level III, the masters level of tracking, obedience and protection.

These days, St-Louis welcomes clients to his dog-training facility, which features an indoor training centre, agility field, kennels and a two-acre fenced yard. St-Louis also makes house calls. “I usually have a pretty good idea of the type of dog I am dealing with and the technique that will work best after a short conversation,” he says. “If I can, I try to fix the problem during a [home] visit and give clients the tools they need to continue working on the problem. My objective isn’t to get clients to commit to lots of training. People seem to appreciate that.”