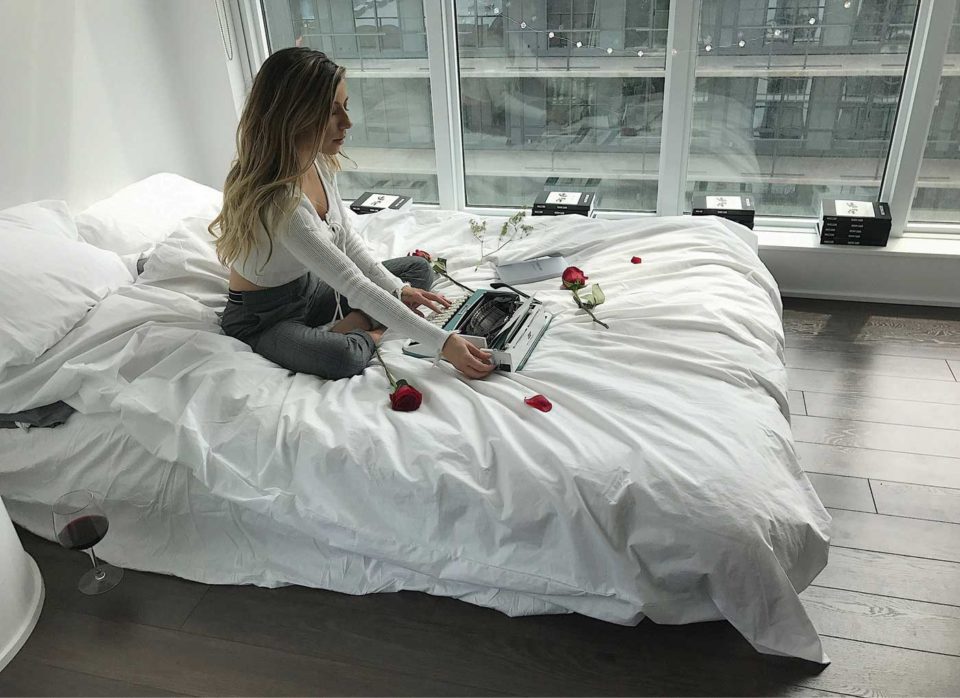 Running through the poems in Haley MacLeod’s first book Room 5608, are undercurrents of the pain she’s had to exorcise. It’s pain the Calgary poet only addresses obliquely in her writing, though she’s open about it when asked. “I don’t want to hide anything. I’m very comfortable with what I’ve been through,” she says.

What she’s been through includes too many dark twists to list here: she and her sisters spent time in shelters and in and out of homes and were told they were unwanted by their mother who left them when MacLeod was in high school. Their father was an alcoholic with money troubles who eventually took his own life. And throughout it all, MacLeod and her siblings battled drugs and depression, taking care of each other when no one else would. From this past, MacLeod has produced poetry that has both helped her work through her demons and communicate with tens of thousands of readers.

The title of her debut collection, Room 5608, refers to the hotel room where she stayed in 2013, an important place and time in her life. That room was where then 19-year-old MacLeod had a life-changing dream, in which she saw herself reading to a crowd of thousands, affecting them with her words, and so decided that writing poetry was her calling.

Published in late 2017, Room 5608 was five years in the making. During that time, MacLeod shared her poetry with others on Instagram, garnering a dedicated fan base of more than 26,000 followers. To this day, she frequently receives messages from people around the world who have connected to her words and found healing through them. One ardent fan even had one of MacLeod’s poems tattooed on her skin, a fact that so touched the poet that she included a photo of the tattoo in her book. “The amount of people I’ve connected with on this soul level is just insane to me,” says MacLeod. “People open up to me now because I’ve given them that comfort space. The number one thing people say is ‘thank you for letting me talk about it, being a shoulder to lean on or just listening to me.’”

The book (available at local bookstores and big-box stores) is a collection of poems that deal with love, loss and pain, a culmination of MacLeod’s life so far. And yet, she doesn’t want readers to dwell on the harshness of her life, but instead realize the grace she’s found, so that those in similar straits can find it as well. “That’s all I want to do with this message is say I’ve been there, I lived through it and I’m here today with a God-given purpose from it all,” she says. “No matter how dark it is in your life, there’s so much light to be found, and you just have to keep fighting.”