St Patrick’s Island just re-opened to the public July 31 but it’s so well designed that it has quickly been populated by people settling in and making good use of all the amenities. We’ll soon forget that the Island wasn’t always this way. Go for a stroll or a bike ride, pack a picnic, take part in one of the many events already filling the St. Patrick’s calendar – there’s something for everyone in Calgary’s newest park. 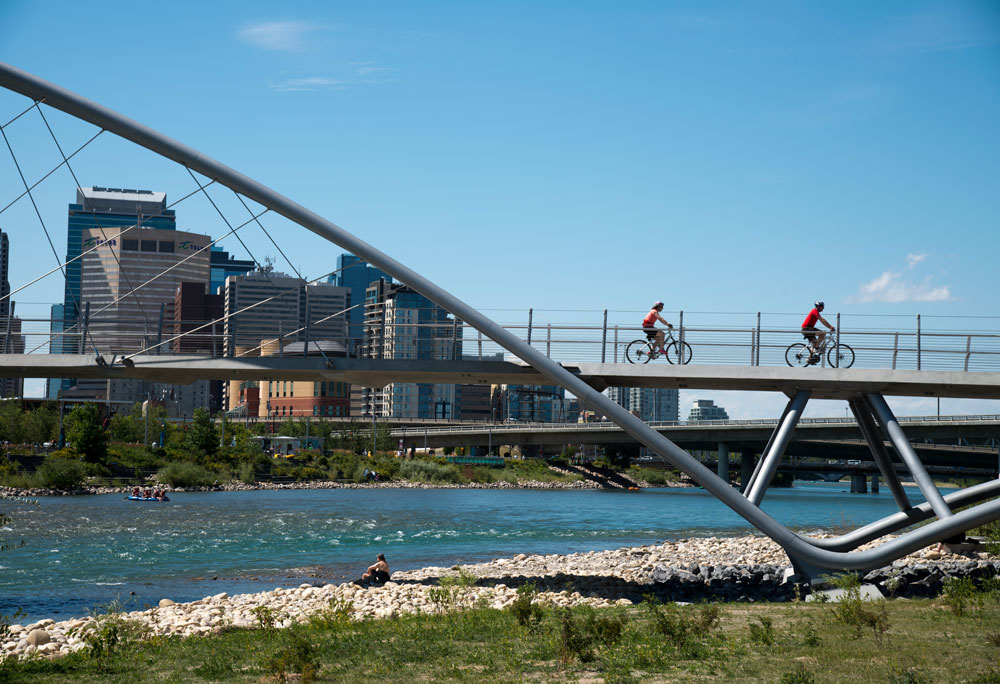 The George C. King Bridge, with its graceful arcs that evoke a skipping stone, connects the westernmost end of St. Patrick’s Island to the East Village on one side and Bridgeland on the other. The Tip, the western point of the island, is behind you as you take the ramp down onto the island. This area has plenty of benches where you can sit away from the crowds and take in views of the downtown. 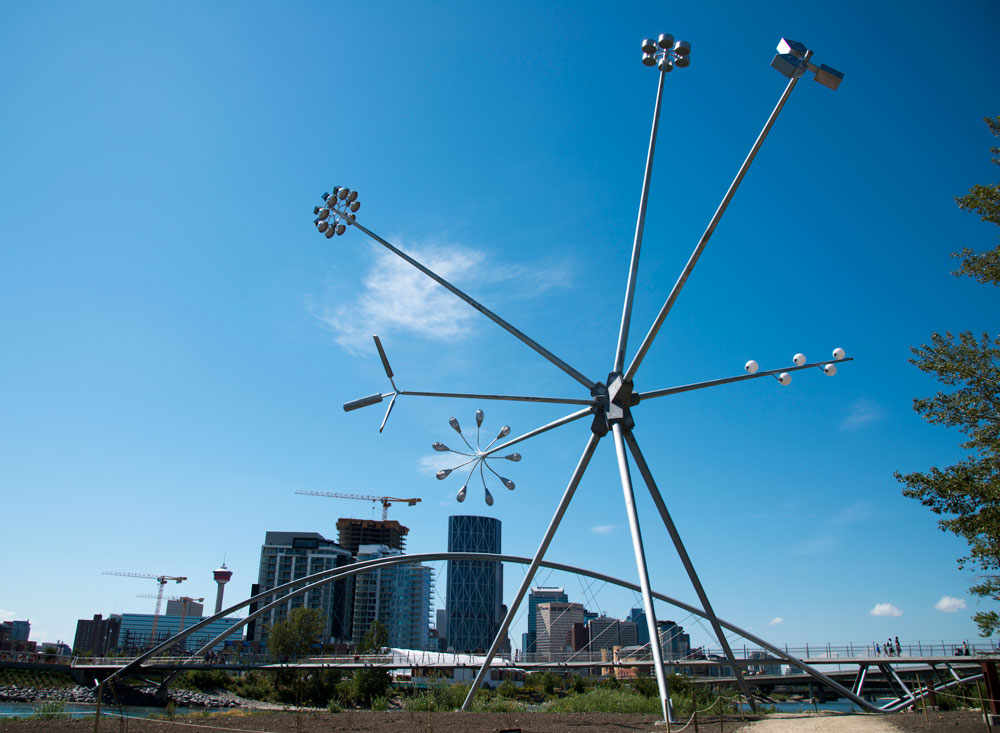 One of the most visible landmarks on the island is “Bloom”, one of Calgary’s newest pieces of public art by Montreal artist Michel de Broin. The piece is 23 metres-high, with working lights on many of its branches that illuminate its surroundings at night. Art lovers should check the St. Patrick’s Island event calendar for upcoming activities such as sketching classes, writing activities and musical guests. 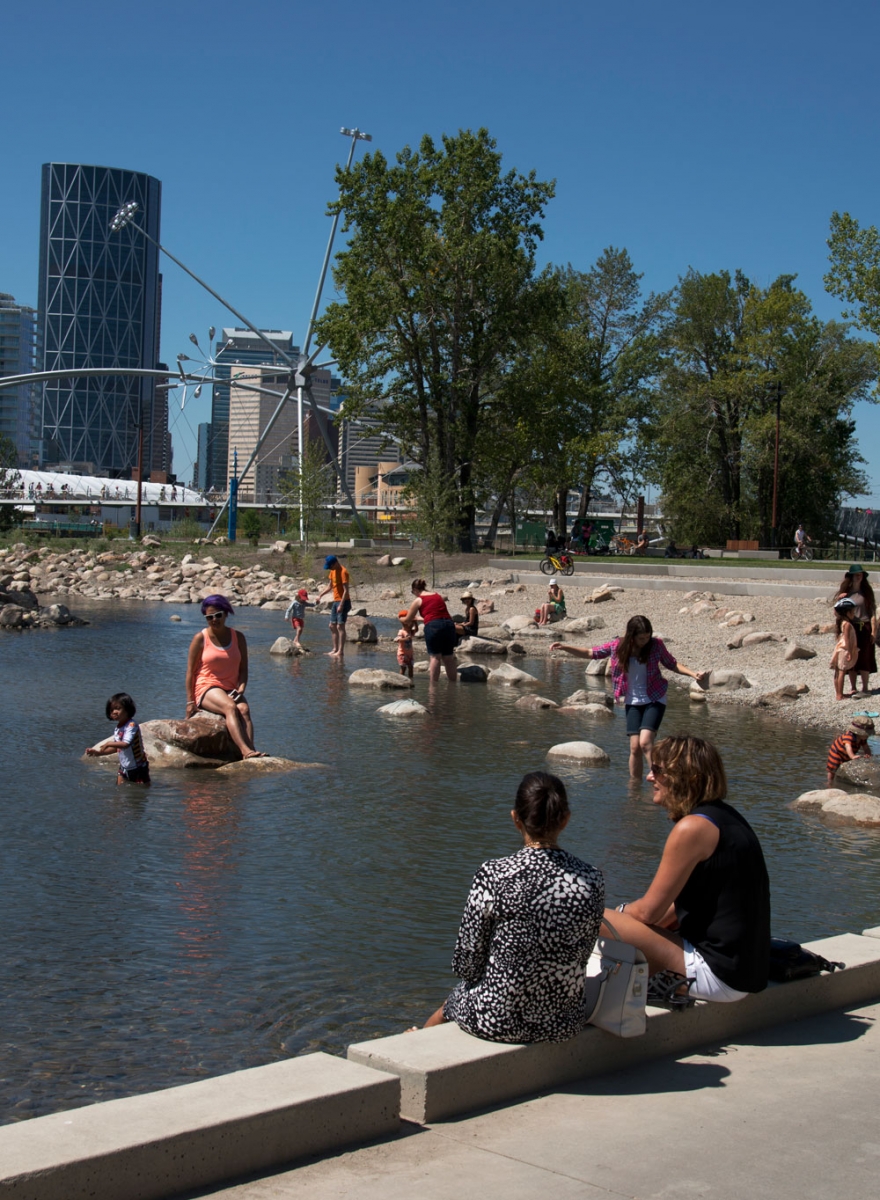 The ramp descending from the George C. King Bridge will lead you straight to Trout Beach. Water from the Bow River fills this newly restored channel, called the Seasonal Breach, to provide a lovely spot for kids (and grownups) to wade and splash around. 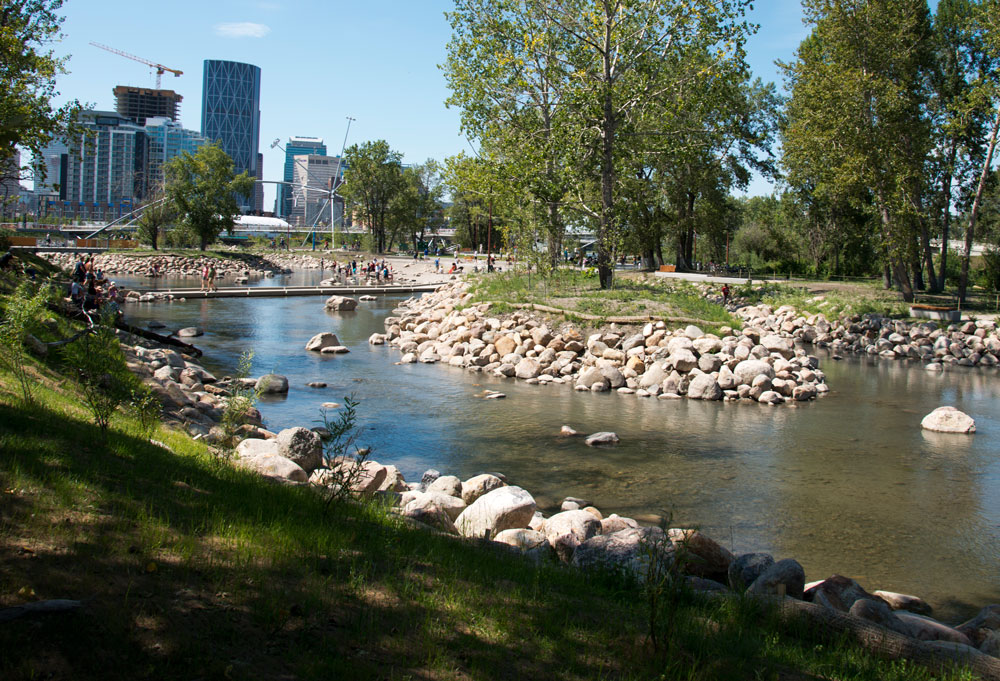 Take one of several paths from Trout Beach heading east, and you’ll find plenty of quieter spots to sit on a bench in the shade, or spread out a blanket in a sunny patch along the Seasonal Breach. This channel was filled in at one point in the island’s history, and its restoration is part of the CMLC’s plan to diversify natural areas and habitats on the island. 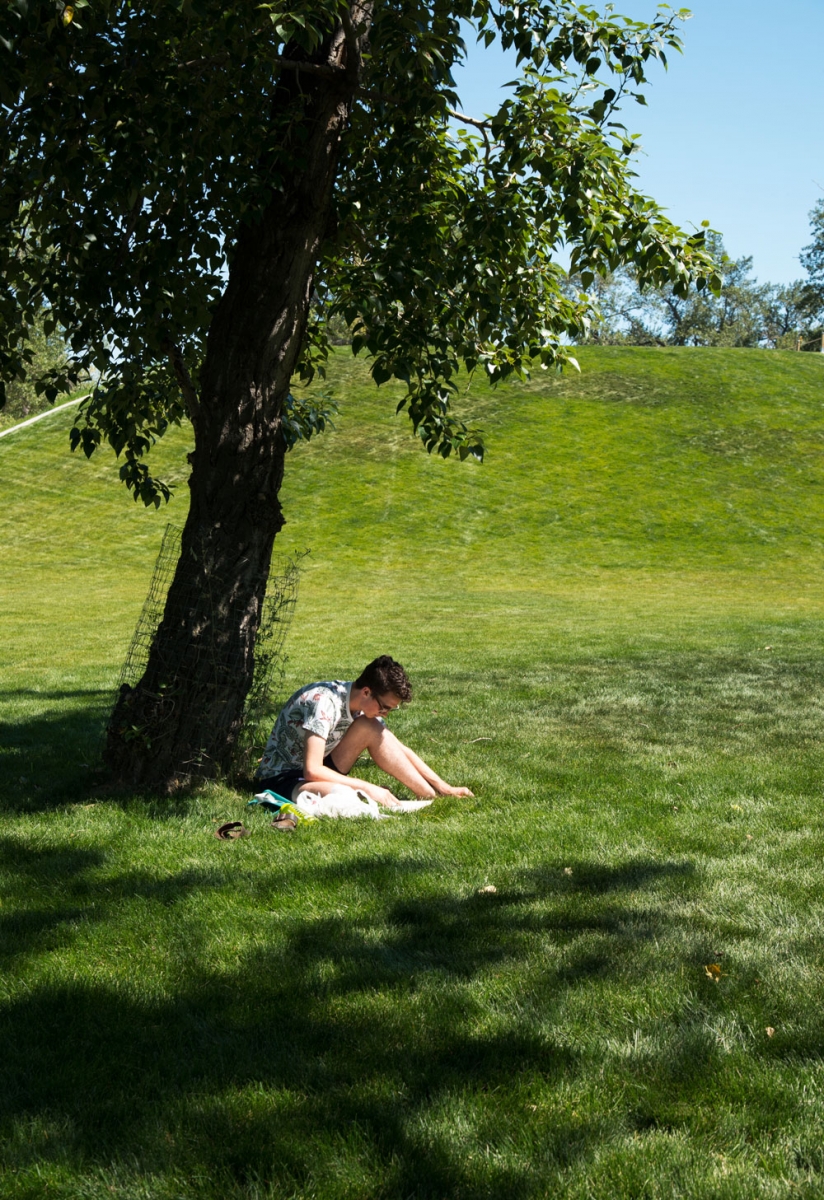 Near the centre of the island is a multipurpose landmark called The Rise. This 9-metre hill, which will be perfect for sledding in the winter, was built out of earth repurposed from the construction of the seasonal breach. There’s lots of space at the base to have a picnic, read, or sit and relax while you watch kids roll down the hill. Every Thursday at sunset from August 13th to September 10th, The Rise is where the Summer Blockbusters Outdoor Movie series takes place (see the events calendar for more info). 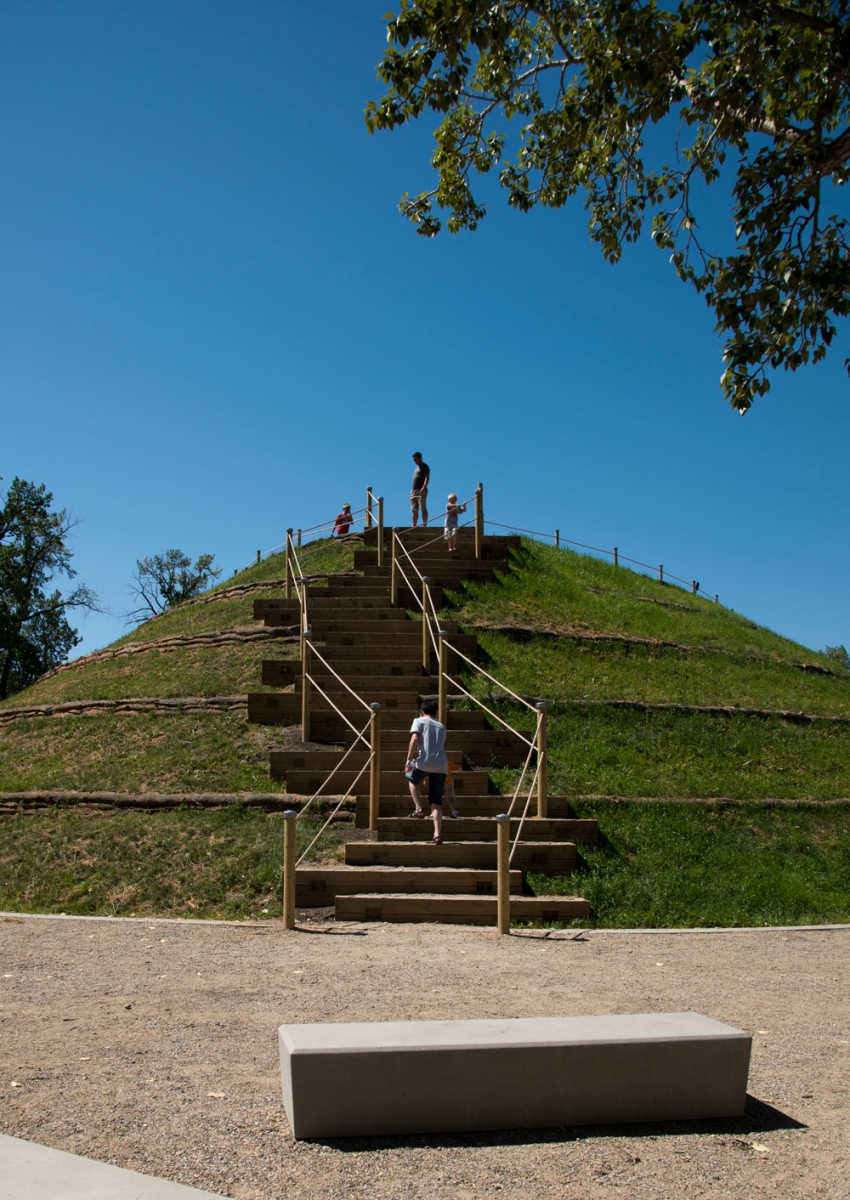 The reverse side of The Rise features a wide staircase, which is sure to be jam-packed come sledding season. 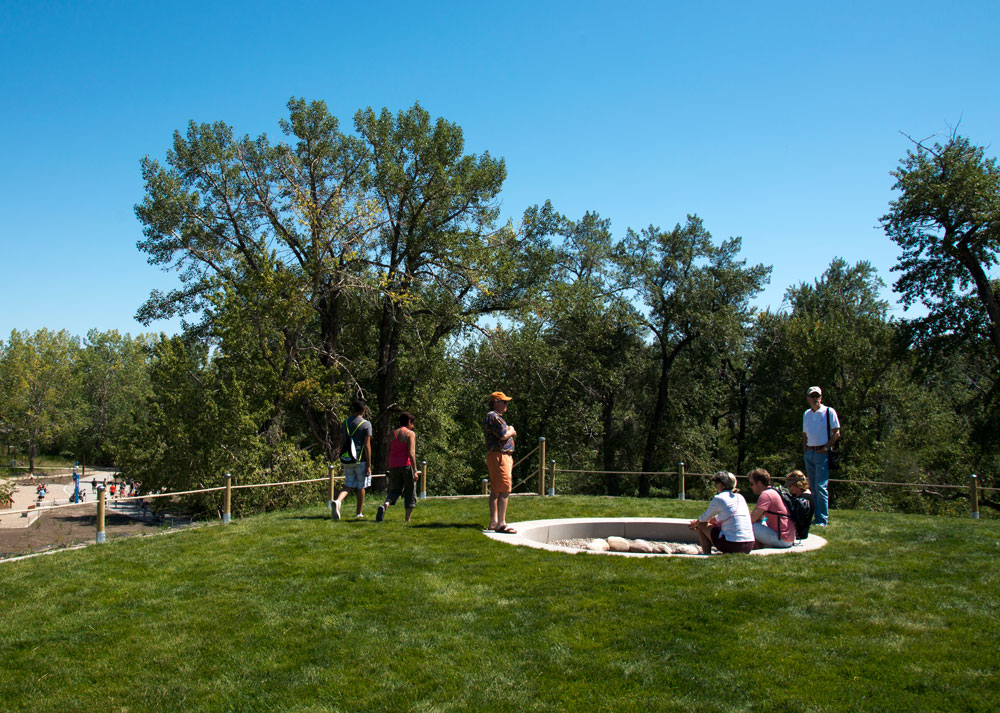 Climb to the top of the rise for beautiful views of the city around you, or to enjoy the firepit. Think hot dogs and marshmallows in the summer, thawing frozen fingers and toes while drinking cocoa in the winter. 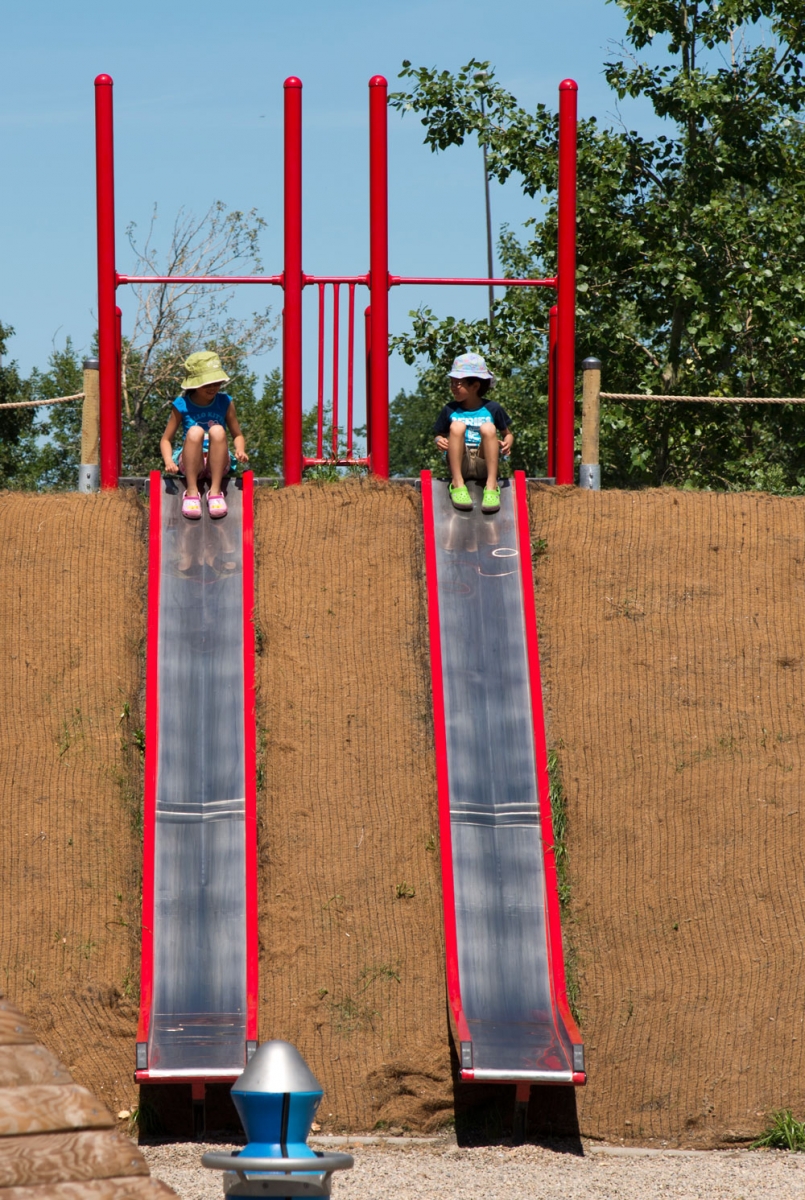 If you can convince the kids (and grownups) in your party to get out of the wading area at Trout Beach, your next destination will likely be The Playmound on the northern side of the island. A great area to let the littles run wild, with the usual slides, swings, and climbing structures, many built of wood in keeping with the aesthetic of the island. 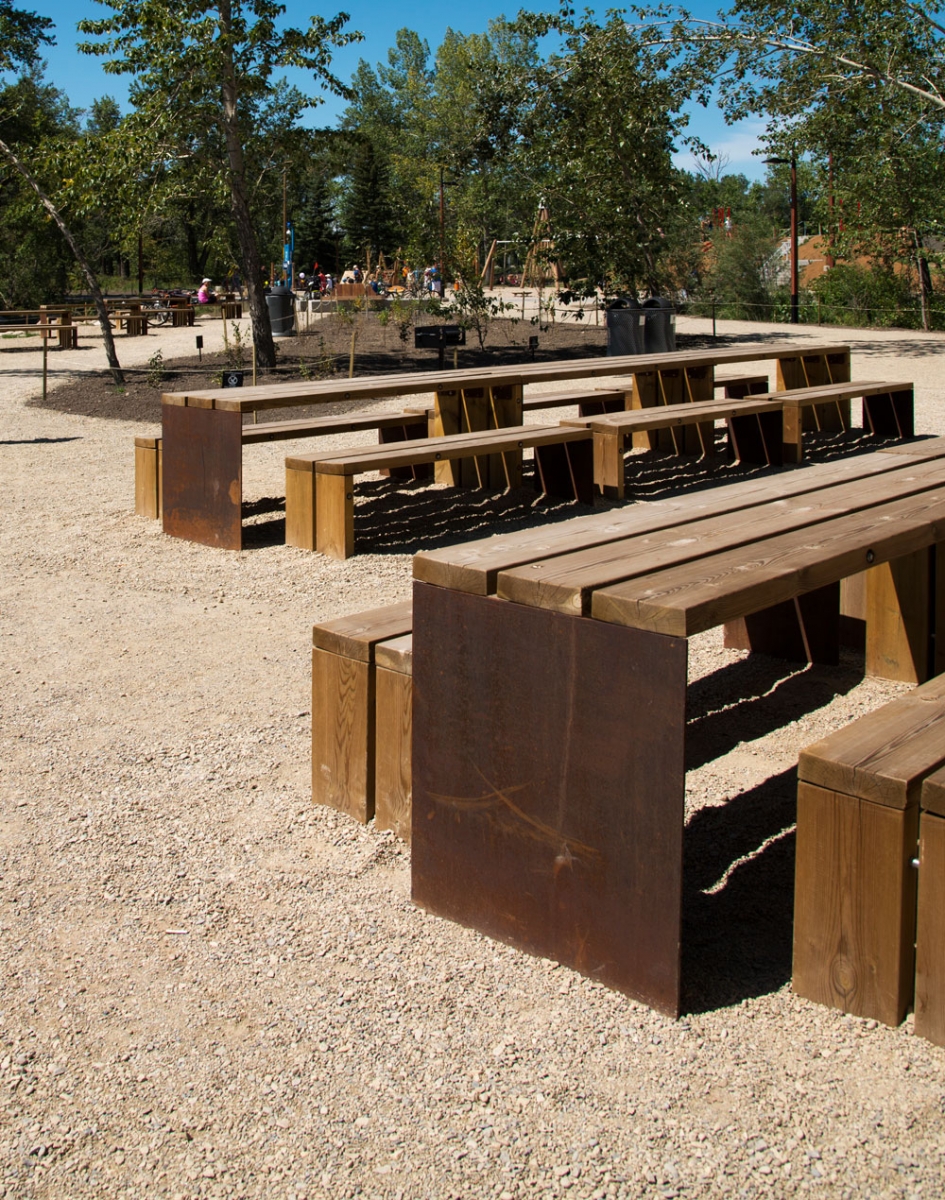 A bit farther east is Picnic Grove. With big long farm-style tables and benches, this would be a wonderful place to host your next get-together with a big group of friends or family. There are even outdoor grills at many of the sites, so you needn’t be restricted to cold sandwiches for your al fresco dining experience. Plan your outing for a Sunday, and keep an eye out for the East Village street crew who will loan you outdoor games such as bocce on a first-come, first-served basis. Time to get your most stylish picnic on! 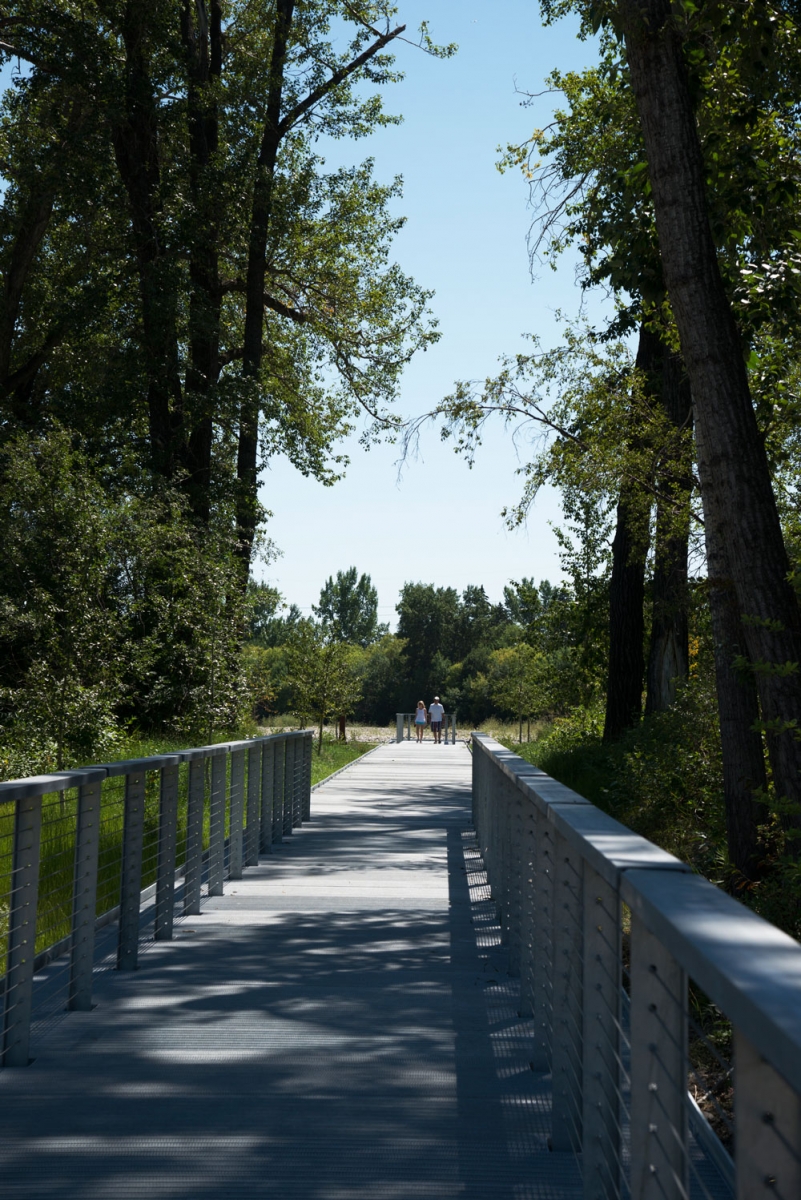 Pearce’s Walk is a long elevated walkway that takes you through Gallery Forest (if Calgary had something resembling an old-growth forest, this would be it), over a lowland channel and restored seasonal wetland. 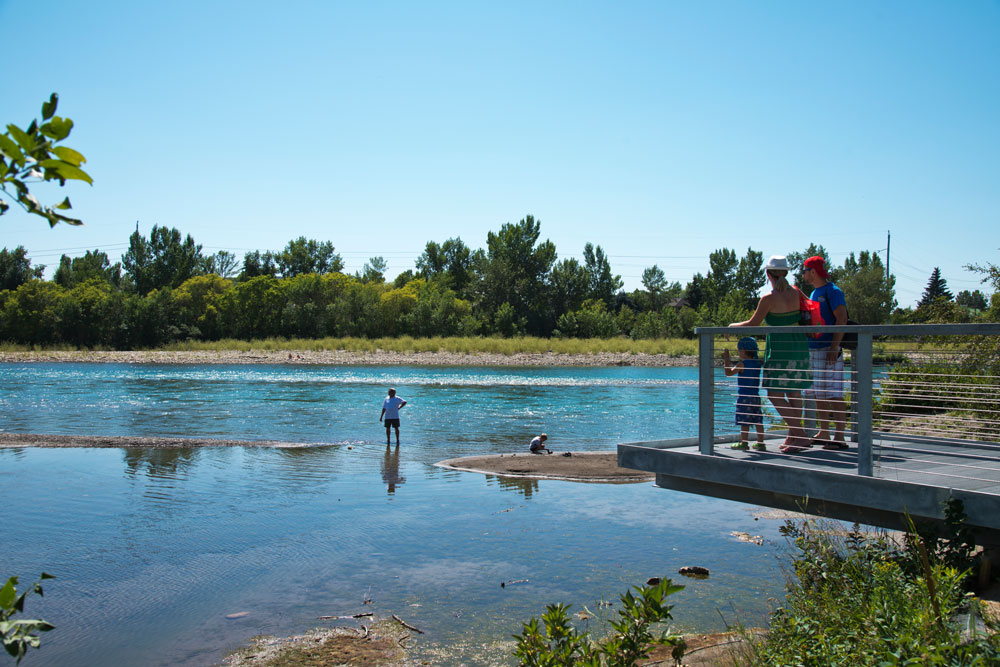 The southern end of Pearce’s walk winds up overlooking The Cove. Wander out onto the sandbar, build a sandcastle, or fish. If you’re passing by the island on a raft, The Cove is a nice calm spot to pull in for a break. 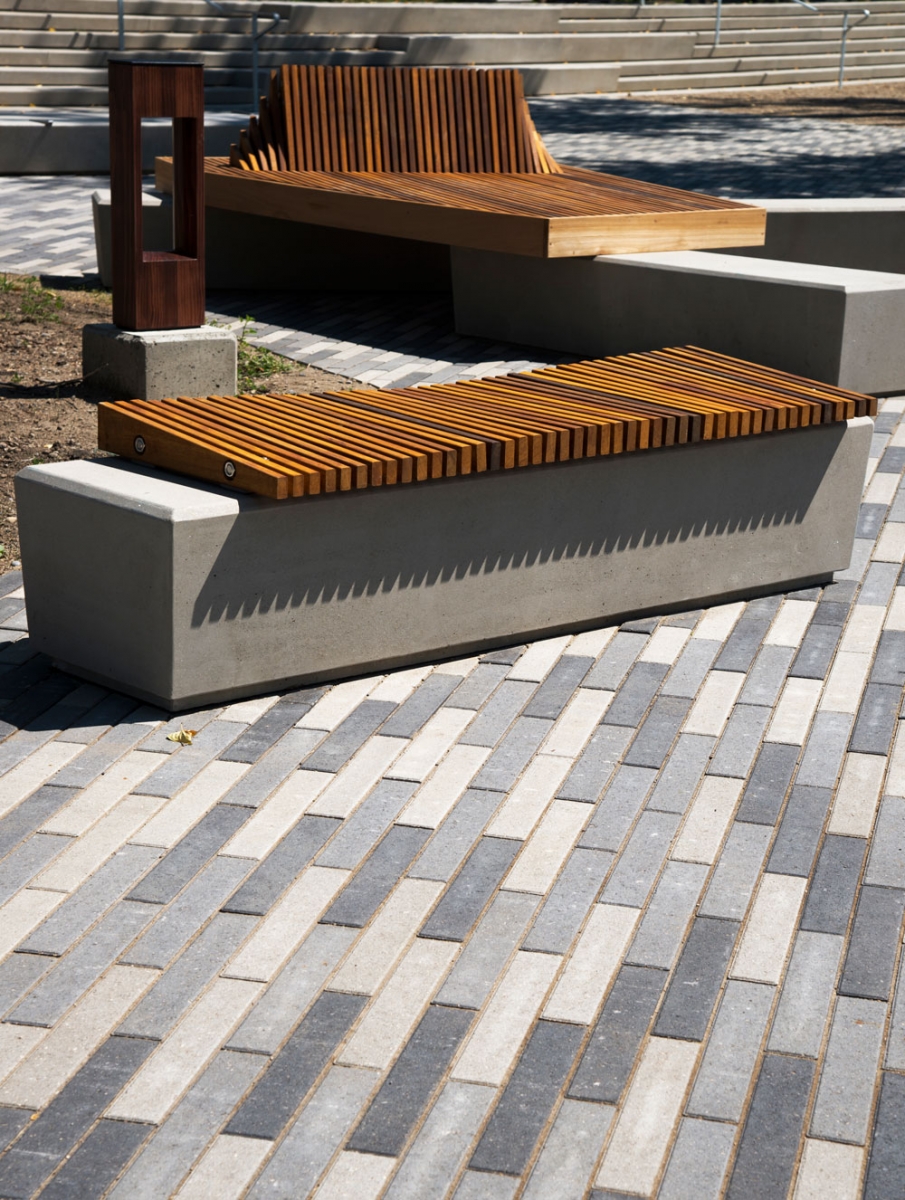 The overall design of the island was meant to feel organic, and also to provide for a wide range of people partaking in a wide range of activities. Even the benches in the park reflect this, some with undulating seating surfaces, others with gently sloping backs for lounging comfortably. The flood of 2013 hit just a few weeks after construction was begun on the island, but landscape architects took it in stride, using this as an opportunity to reassess and reaffirm their plan. When construction continued, it was with the knowledge that many features planned for the island could survive being underwater for some period of time, and that St. Patrick’s would withstand another one-in-100-year flood. The base of the Bloom sculpture, for example, has two-metre-deep cement anchors. 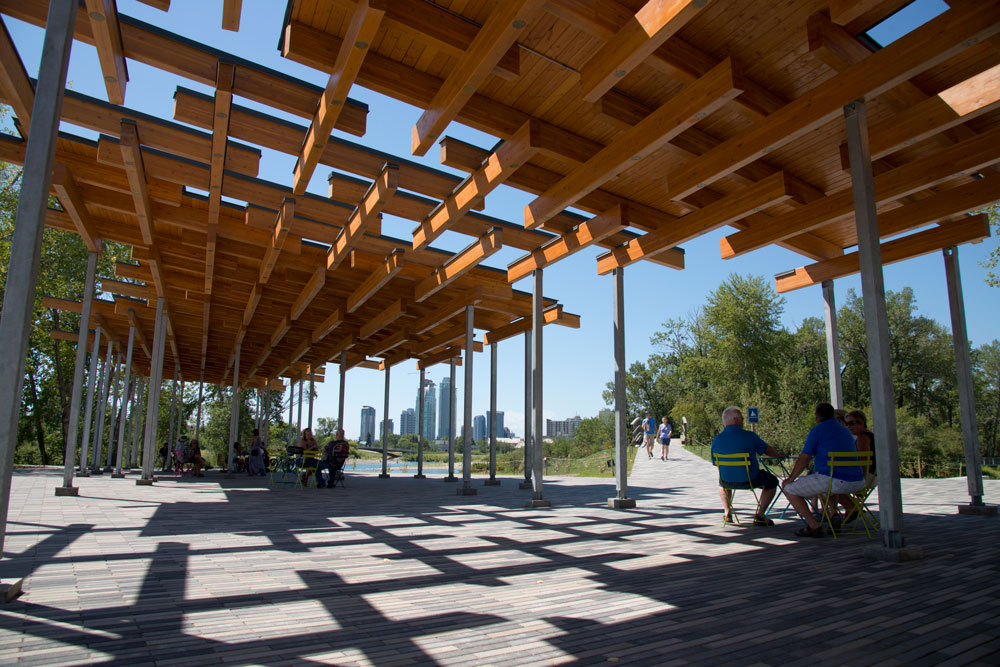 The eastern end of the island is home to Confluence Plaza. A small amphitheatre is surrounded by elegant shade-giving structures – musical and theatre performances, fitness classes, art classes, Parent and Tot Storytime with the Calgary Public Library, First Friday Board Game Nights, and lots more will take place in this versatile space.

Nearby is the Sundeck, with ample seating for sunbathers to lounge. There’s easy access to the plaza from an expanded parking lot (aka the Calgary Zoo’s west lot). There’s also a public washroom located here (in a building clad in wood reclaimed from the old St. Patrick’s bridge), and a water fountain that serves three height brackets: Small, tall, and dog.