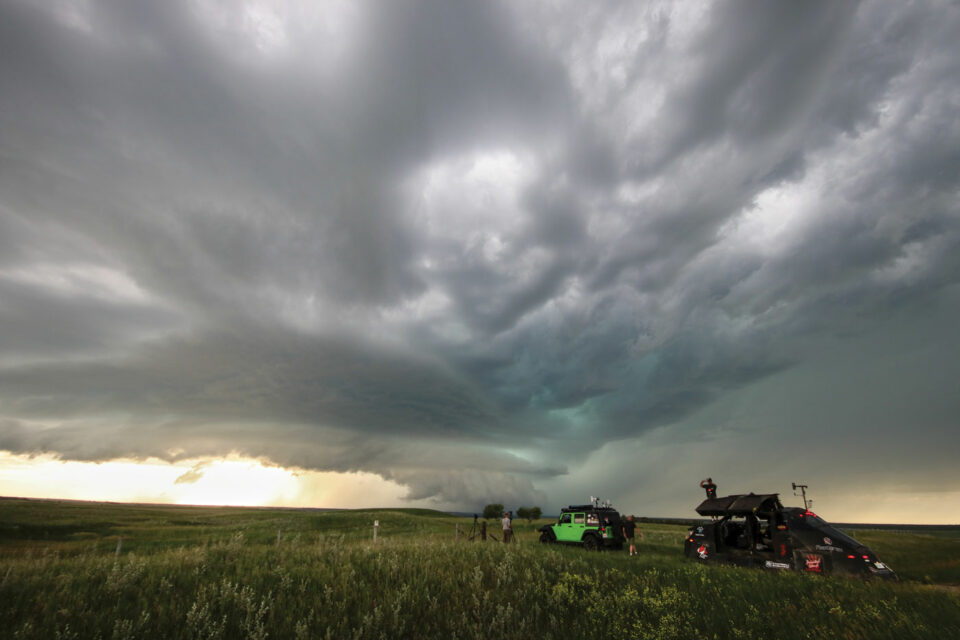 Being present when blue skies give way to menacing storm clouds is a feeling Beth Allan chases — literally. “There’s nothing that can compare in terms of ‘oh my goodness,’” says Allan, who has chased and photographed storms throughout Canada and the U.S.

Allan is part of Prairie Storm Chasers, a six-member collective based throughout the Canadian west dedicated to forecasting, targeting and pursuing severe weather. Specifically, the group tracks supercell thunderstorms — the storms that in some cases will produce tornadoes.

While a rush of adrenaline comes with chasing, the collective’s main focus is providing information. Much of their reporting is done on Twitter using #ABStorm in Alberta, #SKStorm in Saskatchewan and #MBStorm in Manitoba, all of which are monitored by Environment and Climate Change Canada.

The government bureau relies on this “ground truth” to be certain that a storm is producing a tornado or is about to produce a tornado, says Braydon Morisseau, a Cochrane-based chaser and a Prairie Storm Chasers co-founder. “By posting photos, they can see those things and issue a warning or watch.”

The group has become a reliable information source for the public, media and government organizations since forming in 2012. Members also share their experiences through keynote and school presentations, and this past winter, the crew was featured on CBC’s Wild Canadian Weather docu-series.

“If more people understood what was happening with these severe weather storms, they wouldn’t be as afraid of them,” says Morisseau.

The road to expertise in storm chasing comes from lots of prep work, a self-starting initiative and a willingness to put a lot of kilometres on your vehicle during overnight drives.

The other vehicle in the Prairie Storm Chasers fleet – “The Dominator” – is a purpose-built tornado intercept vehicle owned and operated by Prairie Storm Chasers member Sean Schofer. Constructed on a Ford F-350 chassis by Michigan mechanic Kevin Darton, the sleek, heavily armoured vehicle has the ability to drop flush with the ground to prevent wind from getting under it, allowing it to travel within severe conditions. Not only is The Dominator practical in a storm, Morisseau notes, it’s also a great conversation starter.

“If we’re pulling in for gas, we know it’s going to be a 30-to-40-minute ordeal,” says Morisseau with a laugh. “People see it and they want to ask about it. But it’s good to bring awareness that there could be severe weather in your area.”

One of the group’s latest endeavours in innovation is its development of a ground-based instrument called the TAZ-1 with Campbell Scientific Canada Regional Office in Edmonton to be deployed directly into a tornado for data collection. It is the first device of its kind in Canada.

Both Morisseau and Allan normally head stateside in early May to spend time in “Tornado Alley” (the U.S. central plains region known for frequent twisters), though COVID-19 restrictions this year will delay chasing until the start of the Canadian prairie tornado season around mid-June.

Regardless of when the first chase happens, both Allan and Morisseau say the anticipation every year is palpable.

“If there’s one thing storm chasers are really good at, it’s spending time thinking about storms in the 10 months when you don’t have them,” Allan says.

This article appears in the May 2021 issue of Avenue Calgary.