A series of cookbooks from various stages of Calgary’s evolution kept in the local history section of the Calgary Public Library.

Food just like Grandma used to make may sound quaint and folksy, but the truth is probably stranger than we think, if the Calgary Public Library’s collection of old cookbooks is any indication. A flip through these books contain recipes and diets that call for things like spinach in cake icing, “thoroughly cleaning two large pig heads” and even consulting the bible for cooking directions. Here’s a sample of some of the quirkier things we found from Calgary’s culinary past.

One section of this book, titled Food for the Convalescent includes two variations on oatmeal gruel and beef extract, as well as wheatlet mush, wheat mush with eggs and the tantalizingly titled Invalid Muffins. Many of the recipes show just how hard up our ancestors could be.

This recipe for Scripture Cake rests entirely on the cook’s knowledge of the bible to put things together, but don’t worry, you can just hover over the dots to see what they are. 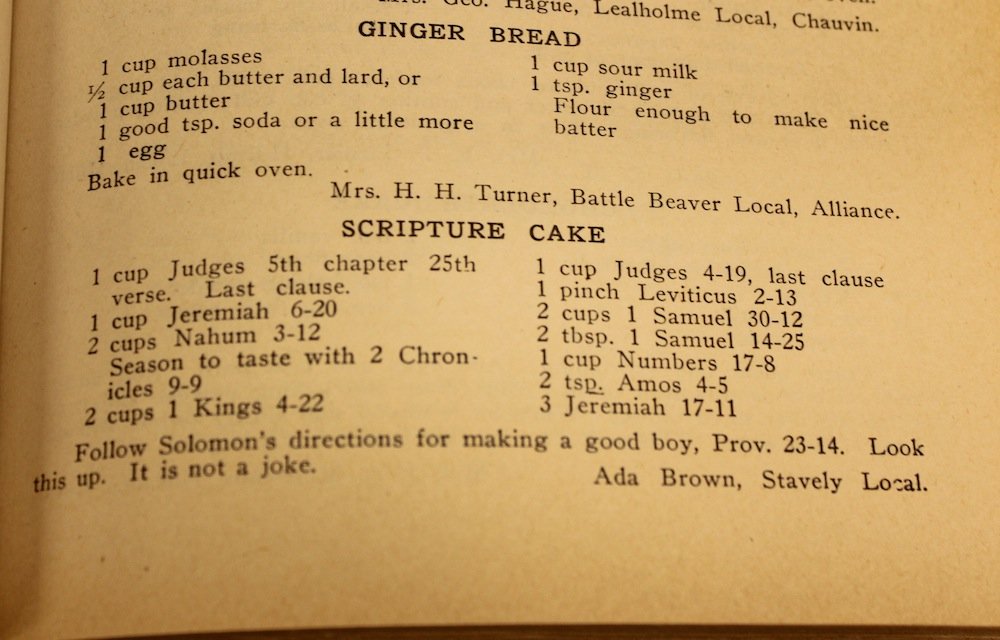 Blue Ribbon Cook Book For Everyday Use in Western Homes [1905]

This book contains a whole section on gruels, including barley, egg, onion cornstarch and cracker gruel.

It was also preoccupied with recovering “off” meat, offering suggestions on how to get rid of “old fowl smell” and a few other things:

This cake recipe calls for icing coloured with spinach, for a dessert Popeye would be proud of.

Take a little more than half of the mixture and to it add one teaspoon liquid cochineal and half a cup raisins. Put the red part in the centre and bake cover with a frosting colored green with spinach.

Clean thoroughly two large pigs’ heads (do not use the jaw as it is too fat), eight pigs’ feet, and four lbs. Good lean boiling beef (the neck part is best). Boil these in a large receptacle until the meat falls from the bone. Remove from the liquor and remove all bones by pressing between the fingers. To this meat add half a cup salt, three tablespoons of good sage (not the pulverized), three large tablespoons pulverized pepper grains (I purchase the whole black pepper grains and put them through the fine part of the food chopper). Mix this all thoroughly by kneading and pressing between the fingers. Now pack in a large earthen crock or granite pudding pans, place a plate over and press down. When ready to use remove the fat which has risen to the surface, then plate and weight. Slice and serve.

In addition to recipes, this book thoughtfully catalogs diets for a multitude of people, including everyone from the Aged to Fat and Corpulent People.

This book had an odd sweet tooth, finding novel ways to use sugary foods.

Melt three “Fat Emma” bars [a precursor of sorts to Milky Way] and beat. Spread on a cake. Makes a very nice icing.