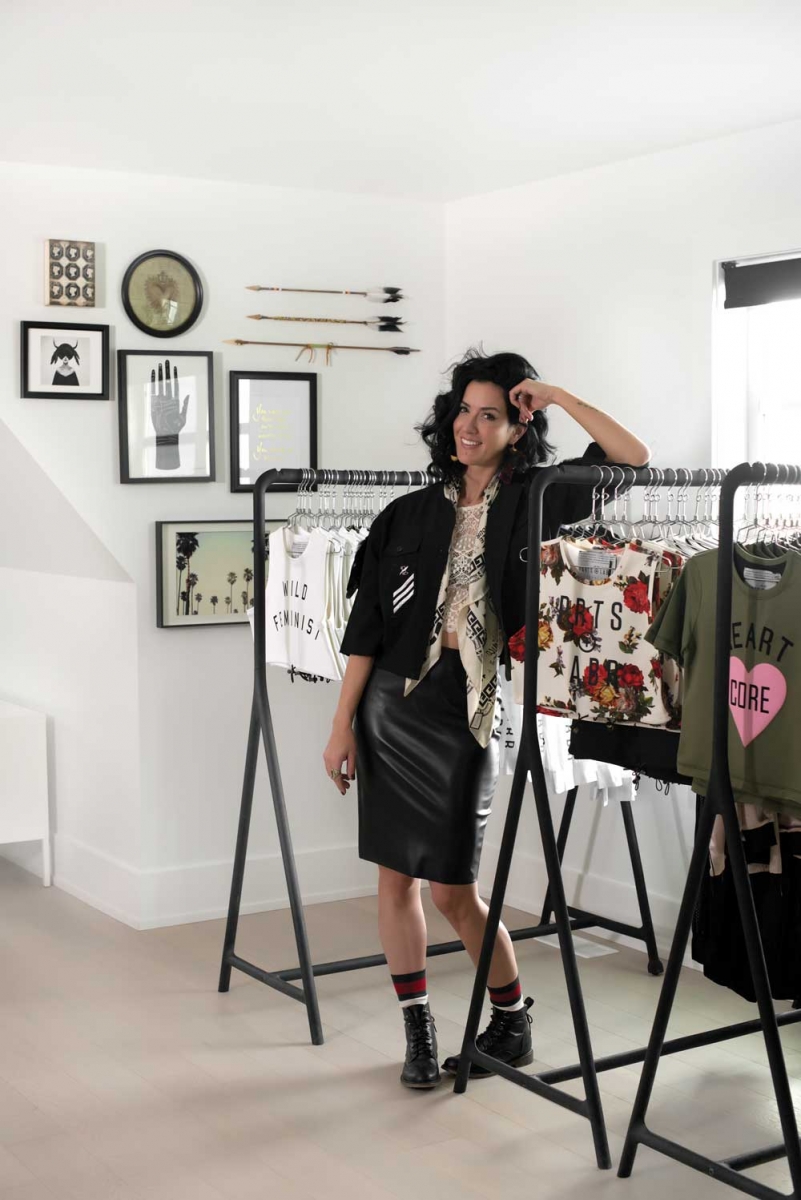 As she walks into the studio to start her class, yoga teacher Jennifer Mehalko pauses to dim the lights. “Tonight,” she says, “things are going to get a little spicy.”

It’s an unconventional beginning for a yoga practice but Mehalko’s regular students have learned to expect the unorthodox. A full-time interior designer and part-time fashion designer, Mehalko also teaches yoga several evenings a week at Inglewood’s Junction 9 Yoga & Pilates, where she’s known for her standout fashion sense, her reams of energy and her ability to wrest every bit of effort from her students.

This Tuesday evening Mehalko wears a vintage cargo jacket tied around her waist, along with fringed moccasin booties, Lululemon leggings and a crop top.  She sports a series of small tattoos along both arms: the coordinates to her grandma’s house, a cartoonish version of the evil eye symbol topped with big flirty lashes and a dainty skull on the inside of one wrist.

Raised in southern Alberta, Mehalko, 36, began working as an interior designer in Calgary in her early 20s. During that time, a co-worker convinced her to try a yoga class. Within months, she was a seven-days-a-week practitioner of yoga.

She also reconnected with an old boyfriend, Brad Mehalko, a professional hockey player who had returned to Alberta in the off-season. Now married, the pair dated long distance for a year before she moved to Norway to join him. Mehalko found work at a design firm there, but missed her social circle in Calgary, so she sought out yoga studios for community. “I’d have no idea what they were saying,” she says. “I’d look around and try to do what they were doing.”

Over the next years, Brad’s hockey career took the couple to Germany and Finland. Mehalko continued to do contract design work and sought out group fitness classes in each new locale. “No matter where we went, the fitness community was a community I could connect with,” she says. “It was something I knew, a place I was comfortable. Movement is movement, whether it’s in English, or Greek or whatever.”

The couple moved to the Los Angeles area in the wake of the 2008 global financial crisis. At the time, American firms didn’t have enough work for established American designers, much less for a newly arrived Canadian. So Melhalko immersed herself in the fitness community of southern California – a mecca for yoga and spin enthusiasts.

She became certified to teach yoga and spin and found teaching a refreshing change from the material world of design. “This wasn’t about stuff,” she says. It was about spending an hour or so with people, just turning on the music and moving.”

The Mehalkos moved to Calgary in 2010 when Brad retired from hockey. Jennifer launched her own interior design company, Found Design Group, and continued to teach yoga and spin.

In 2014, the Mehalkos teamed up with two other couples to launch The Sweat Lab, a west Calgary gym offering yoga, spin and barre classes. Mehalko was involved in every aspect – designing the space, developing a small apparel collection with Lululemon and training instructors – but six months in, it was clear the partnership wasn’t working and the Mehalkos sold their portion of the business. A period of unhappiness set in, made worse by a car accident from which Mehalko suffered a concussion, soft-tissue damage in her neck and some nerve damage. She was unable to exercise for several months and stopped teaching classes for a full year. Even when she started exercising again, her heart wasn’t in it. “I would go practice [yoga] or go spin and I’d show up 60 seconds before the class would start and as soon as the class was over, I was gone,” she says. “Nine times out of 10, I’d cry through the class.”

After that year without teaching, Mehalko came up with a new idea. Having been taught to sew by her grandmother, she had long dreamed of designing activewear. The name Parts + Labor came to her as she was driving home from having her car repaired. “Those are the two things a person needs to achieve the happy rush that comes from movement,” she says. “Parts are the gear, the clothing; labor [sic] is the sweat they put into it.”

The first collection, “Heart Work,” was released in 2017 and features jackets with the same flirty evil eye image tattooed on her arm.

For her own workouts, Mehalko sometimes trains with her husband (it’s a source of pride that she can outperform him in abdominal pikes) but group classes remain her go-to for everyday fitness. She’s an early morning workout person, hitting local studios for 6 a.m. classes in yoga, spin or barre and she visits Bridgeland’s Movement U gym once a week for a class called RowBody, a mix of rowing machines, free weights and resistance-band exercises.

“When you only have an hour, that hour is pretty sacred,” Mehalko says. “If I go in with the right mindset – that I just need to take something away from it – I always feel better.”