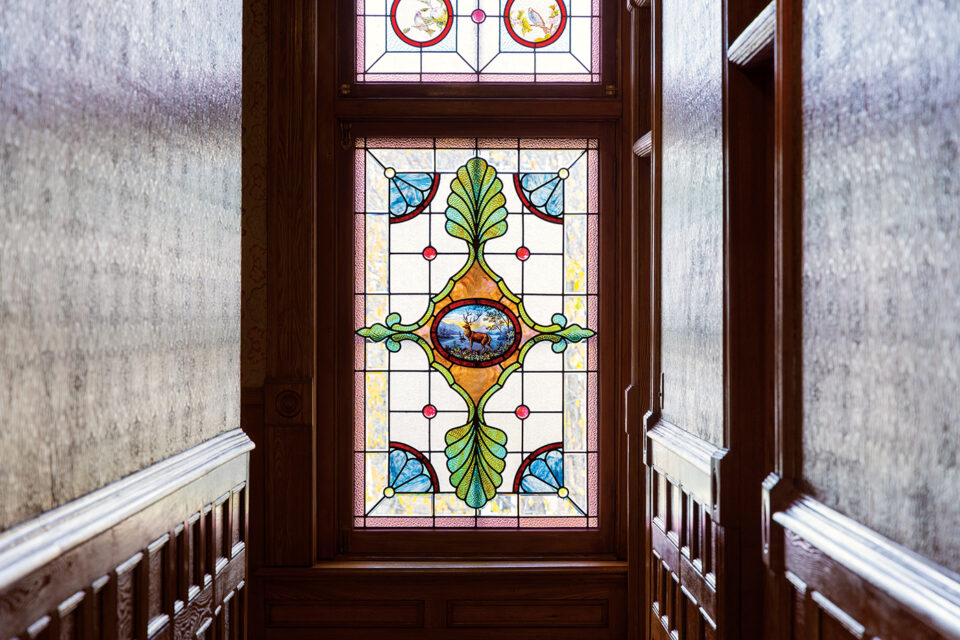 In the heart of the Beltline, Lougheed House is both a national and provincial historic site, and recognized as a Métis household in honour of Lady Isabella Clark Hardisty Lougheed, whose beloved gardens are now a popular park attracting 80,000 visitors each year. Lady Hardisty Lougheed and her husband, Senator Sir James Alexander Lougheed, had a love for the nature of this region, which is showcased throughout their 1891 mansion in a series of stained-glass windows created by Toronto-based Robert McCausland Limited, North America’s oldest studio. Family-operated since 1856, the studio is currently run by fifth-generation owner, Andrew McCausland.

The windows are fine examples of Golden Age Victorian stained glass. The grandest features a painted panel of a magnificent stag by a mountain lake.

McCausland says it was common in that era for clients to select bird and animal designs from books published in England. As such, the Western bull elk calls up the red deer stag in Sir Edwin Landseer’s iconic painting, The Monarch of the Glen.

The large window parades Robert McCausland’s impressive repertoire of materials in an eclectic mix of texture and colour. Deep crimson, flashed orange, pebbled green, faceted jewels and bevelled glass surround the oval emblem that underscores Senator Lougheed’s status and ties to British culture and fashion, as well as the deep, enduring connection of Lady Isabella’s people to the natural world.

Lougheed House is open to the public Thursdays and Fridays, 11 a.m. to 4 p.m. and Saturdays and Sundays, 10 a.m. to 4 p.m., with admission fees in effect.