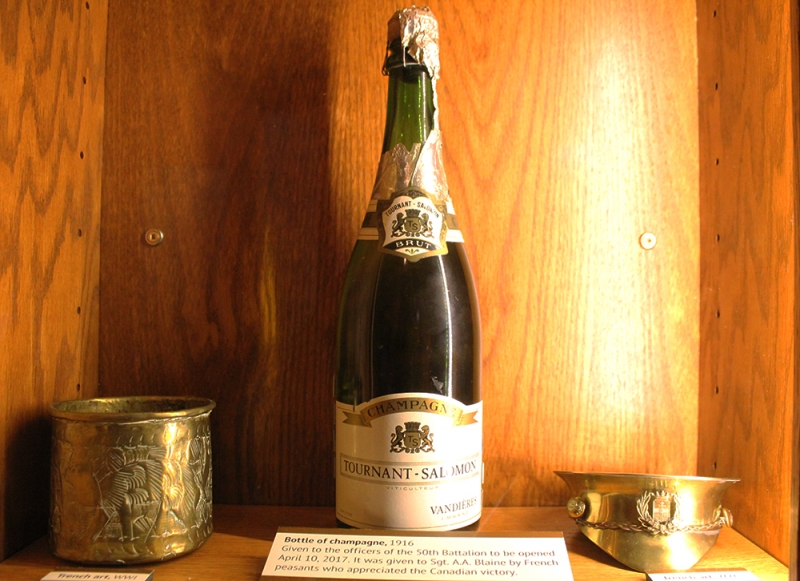 If you were offered the chance to sip a glass of 100 year old French Champagne, would you take it?

That’s the question members of the King’s Own Calgary Regiment (KOCR) faced with a bottle of Tournant-Salomon Champagne that has spent decades on display at The Military Museums in Calgary.

The story goes that members of the Regiment’s predecessors, the 50th Battalion, acquired the bottle in 1917 to celebrate their victory at Vimy Ridge. The museum’s account says they were gifted the bottle by grateful French peasants, though another story says they’d purchased it and a few other bottles in order to celebrate.

Regardless of how they came into possession of the bottle, all accounts make clear that the members of the battalion agreed to save the bottle to be opened on April 10, 2017, in commemoration of the 100th anniversary of their victory.

The bottle eventually found its way to The Military Museums in the 1960s when Sergeant Persil A. Blain, a member of the original battalion, gave it to the KOCR. It was placed in a section of the museums dedicated to that regiment.

Al Judson, curator with the King’s Own Calgary Regiment museum and archives, says former commanding officer, Lt.-Col. Ross Wickware had notified the wine’s makers of the Regiment’s intention to pop the cork come 2017.

The bottle on display at The Military Museums.

“Ross has been in contact with the vineyard. They warned him it’s not going to be drinkable,” says Judson. “It’s never been refrigerated or kept out of sunlight. It’s been on display in a museum under lights for the last 20 or 30 years. It just stands to reason that it would not be drinkable.”

There is some debate as to whether the bottle should be opened at all, with some die-hards saying the bottle should be preserved as is and that opening it would destroy the artifact. Judson’s take is that what the bottle represents is more important than the thing itself. “There was an agreement. He gave the bottle with the express purpose that it be opened, and symbolically, we will do something to remember the occasion the battle of Vimy Ridge.”

Though current plans for the April 10, 2017 celebrations aren’t locked down, Judson says he’s heard there will be an event on Signal Hill, where the bottle will possibly be poured out as libations in honour of the occasion.