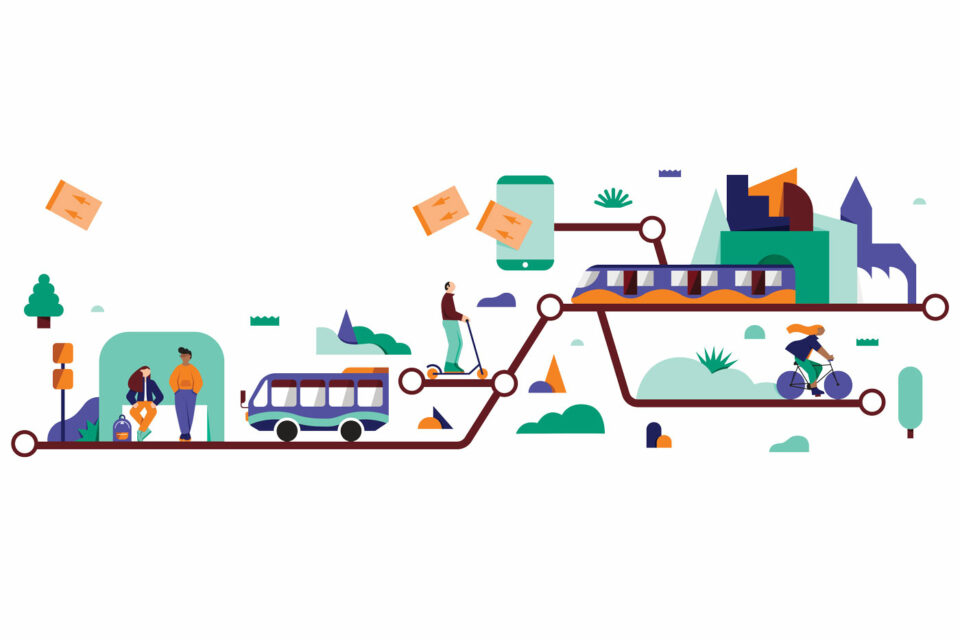 The challenges COVID-19 created for the transit system were more about changes to our behaviours, which have struck a major blow to ridership and therefore revenue. Huge numbers of Calgarians started working from home and there were suddenly fewer non-work reasons to leave home due to restrictions on gatherings, events and businesses. This has already caused service reductions and route changes, the question is how long the changes both to ridership and the system, will last.

Davies estimates that in a normal year about 45 per cent of Calgary Transit’s budget is covered by fares, in comparison to around 30 to 35 per cent in other cities. While that favourable ratio of fares to taxpayer subsidy was a strength of the Calgary system and its sustainability before the pandemic, it became a liability last year when ridership dropped dramatically. Davies noted that as of December 2020, Calgary Transit was projecting an annual loss of $40 million to $45 million for the year, but that this was actually down from an earlier projected loss of $105 million to $110 million, because the service made $60 million in cuts. While Davies wouldn’t speculate on future funding, it seems reasonable to assume that making up for decreased ridership going forward could mean increases to fares, to municipal property taxes, or both.

The challenge of changing ridership comes with opportunity — Davies says it’s possible to redesign the city’s entire bus route network in one to two years. That flexibility may be key since it’s unclear when or if everyone will return to the commuter life they had before the pandemic.

The City of Calgary has been collecting household data on travel for more than 50 years, most recently with the My Travel Log survey that has run on an ongoing basis since 2015. It was temporarily suspended in March of last year but resumed by September to produce COVID-specific data sets on various forms of transportation that should be finalized by the time you’re reading this. (The survey closed again through the winter and is expected to reopen this month.)

At a meeting of the City’s Transportation and Transit committee in October of last year, staff presented three scenarios for how COVID-19 may affect transit use (all of which indicated reduced ridership) and recommended enhanced data collection, finding new ways to make money and planning ahead for a shortfall.

Before the pandemic, Calgary Transit was already making changes. Recent developments include the mobile ticketing app My Fare and an on-demand transit pilot program currently underway in outer suburbs. In 2019, Calgary Transit launched the fourth line of the MAX bus rapid transit (BRT) system and opened North America’s largest indoor compressed natural gas bus-fuelling complex. Davies says the fuelling complex is the first step in one of the organization’s biggest goals: “greening the fleet.” The next step is an electric bus pilot planned to launch around the end of the year. Future developments include improved accessibility for the Access bus fleet, and explorations into a range of things, from a fleet of electric scooters to driverless buses.

“I’d say, on the bigger projects, that Calgary is on the right track,” says David Cooper, principal of Leading Mobility, a transit consultancy currently working with Calgary Transit. “The challenge in Calgary is that it’s been a lot easier to secure funding for bigger-ticket capital projects like an LRT expansion or the new BRT system. But it’s been incredibly challenging to get operating dollars.”

Cooper authored a strategic report for the Canadian Urban Transit Association with recommendations to the federal government on how to support transit with funding and policy to ensure systems can survive the pandemic and thrive long-term. The report highlights three of its recommendations as most important: ongoing operating support, continued completion of transit networks and decarbonizing transit fleets. It also recommends funding higher frequency of service and active transportation connections, like bike lanes and improved pedestrian access to transit stops.

“It’s well known that frequency is quite strongly linked to ridership,” says Willem Klumpenhouwer, a postdoctoral fellow at the Transit Analytics Lab at the University of Toronto who originally hails from Calgary. “Of course, doubling the amount of buses means doubling the amount of buses, so it costs twice as much to operate … This brings into focus this really important conversation that people don’t have very often between capital funding for projects like the Green Line … and the operational side, which is things like increasing yearly funding to increase frequency,” says Klumpenhouwer.

Rerouting, service frequency and funding are likely to be the near- and middle-future of transit in the city. Major projects like the Green Line, greener initiatives and innovative pilots like on-demand transit will have more influence on the long-term future. We need to keep our eyes on both streams as we move forward, because while demand is low now, it’s expected to return.

Cities worldwide are studying demand-based transit that could eventually be routed by algorithms. Two pilots are underway in Calgary in far-flung suburbs with low ridership rates.

The Province has agreed to cooperate in Toronto-based TransPod’s feasibility study on a vacuum-sealed “hyperloop” line between Calgary and Edmonton. Estimated to cost $7 billion and be capable of travelling at speeds exceeding 1,000 kilometres per hour, it is still in the research phase and has received no government funding.

This lobbying group argues that a greener, less car-dependent mode of transportation already exists — it’s just not as sexy as new tech. Advocacy for standard-speed or bullet-paced rail for the province is ongoing.

The Canadian Infrastructure Bank and Alberta’s transportation ministry are studying the feasibility of a rail line from Calgary International Airport to Banff, with stops in Calgary, Cochrane and Canmore.

This Edmonton project would carry passengers over the city’s River Valley on a privately funded and operated gondola system. It has so far drawn mixed reactions but raises interesting questions about how private urban transit could function alongside public service.