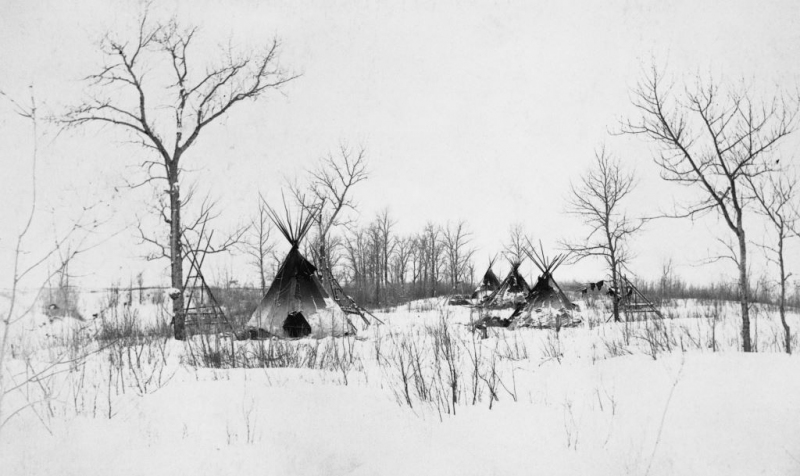 A first nations camp on the elbow river from sometime between 1886 and 1888. if you look closely you can see drying racks on the teepees, which are used to dry food and clothing as required as well as stacked travois. Photo courtesy of the Lougheed House and the Glenbow Museum.

Calgary was not always the skyscrapered, sprawling cityscape we know today. More than 100 years ago, it was still in its infancy with more tall grass than towers. Fortunately, we have experts who can retrace our steps back and paint a convincing picture of our ancestors lives. Two such experts are Peter Duthie and Harry Sanders, who will be hosting Reimagining 1890s Calgary at the Lougheed House on March 31, an event centred around the Duthie-curated exhibit Herein We Dwell: Unexpected Images of Calgary in the 1890s. The pair will uncover the stories behind the Lougheed House’s exhibition of photos from the end of the 19th century.

“I wanted the imagery to be fresh, not the typical ‘Western’ imagery we connect to Calgary and Alberta,” says Duthie. “As much as there are some wonderful farming and ranching images in the archives, I selected images, for instance, of two young doctors together on Stephen Avenue or a rowboat making its way across the Bow River flood waters.”

Here’s a sneak peak at some of the photos and stories they’ll be discussing at the end of the month.

Duthie: “In the aftermath of the United States census of 1890, which determined that the American Frontier no longer existed (frontier meaning that nebulous line of continental development west that defined, as described by Frederick Jackson Turner’s “frontier thesis,” a new sense of American democracy) close to 600,000 American farmers sought better opportunities in the Canadian West. Nearly two-thirds returned to the U.S. Here they gather near T. A. Hatfield’s general store at First Street S.E.”

Sanders: “That building with the slanted roof still exists. It’s in Chinatown. Half the building is still there on the east side of Centre Street just south of Second Avenue.

“It’s interesting to note there was a tennis court in downtown Calgary. It adds a dimension to what we know about these people’s lives. This gives [that history] a little bit of colour.

“The other thing to note is the date. It’s January and no one is wearing a coat. Our experience of Calgary in the winter and looking forward to Chinooks is as old as Calgary.”

Sanders: “There were so many unhappy things about the life of Chinese Canadians at that time, and not just in our city. They were subject to a head tax. They were overwhelmingly either single or supporting wives or children in China, who they were unlikely to see for a long time. If you read newspaper accounts or contemporary literature, you know that good feeling towards Chinese immigrants [was] hard to find. There was some level of acceptance among some people, but the balance was negative.

“What’s going onhere is they’re having a lion’s dance. It’s nice to see this, because this is a positive image. It’s a community celebrating something that’s theirs. ”

Duthie: “Quite possibly that is Edward McArthur on the left, night wrangler at the Bar U Ranch for a while and brother to Mrs. Tom Edworthy. He arrived in Calgary in 1883, the same year George Murdoch, on the far right, made his way west in anticipation of the Canadian Pacific Railway’s arrival. George Murdoch was a harness maker by trade. After settling in Calgary he began a brisk trade with the North West Mounted Police and the Blackfoot, with whom he maintained a close connection – he even learned their language – for many years. Murdoch played a significant role in Calgary’s incorporation as a town in the Territories in 1884. He became its first mayor, a position he held for two years before being removed from office along with his entire city council for opposing Magistrate Jeremiah Travis enforcement of the prohibition of alcohol in the North-West Territories. J. Grue, otherwise known as “an old trapper” sits in the middle.”

Sanders: “One thing I enjoy is that you see the nurses enjoying themselves. You don’t often picture this kind of thing. They’re candid and active, where we’re accustomed to static images where people are standing formally waiting for the long exposure unsmiling.

“Also, I know where this picture is taken. What I really appreciate about these photographs is that in most cases you can go back to the very spot. This is the old Calgary General Hospital which is now the Rundle Ruins next to the Stampede Grounds.”

Duthie: “Emma Griffis (later McGill) enjoys an animated moment with a friend away from her duties as head of the typhoid ward after graduating from the Calgary General Hospital School of Nursing. This image has the spontaneity of a snapshot as the laughter peaks and the sun bursts into view from behind a grove of trees. But there is a somber undercurrent to this photograph. Soon World War I will break out, and Emma will find herself traveling to England to work at the Bramshott Military Hospital.”

Reimagining 1890s Calgary takes place March 31 at 7 p.m. at the Lougheed House. Herein We Dwell: Unexpected Images of Calgary in the 1890s runs until May 29. For more information visit lougheedhouse.com.