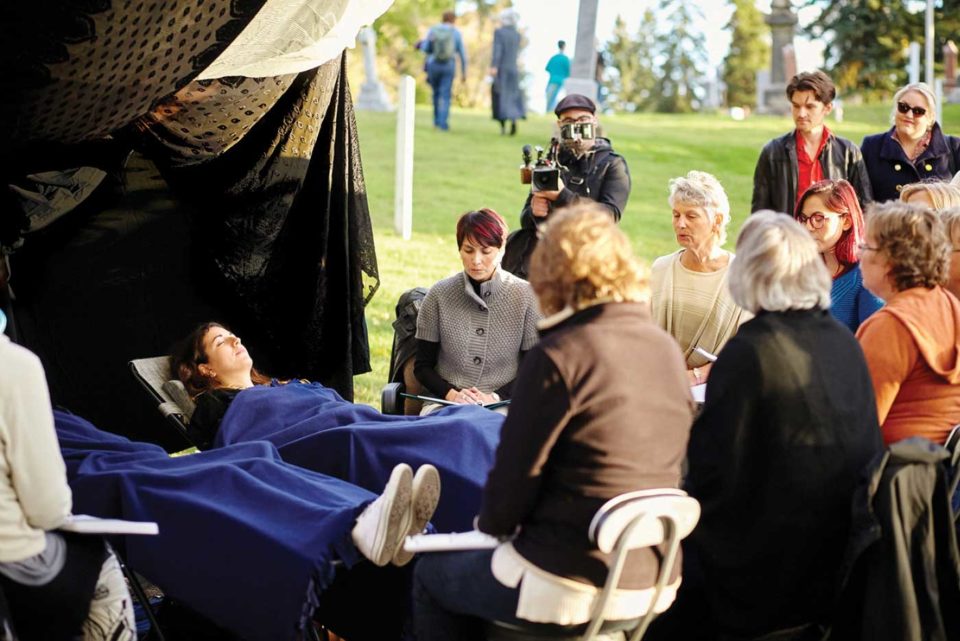 The Bridge To Peace Threshold Choir singing at the 2016 Equinox Vigil. Photograph by Aran Wilkinson-Blanc.

A few times a month, a group of women bring half-a-dozen folding chairs to a Calgary hospice room and sing calming three-part harmonies to help those near the end of their lives feel at peace. This group, the Bridge To Peace Threshold Choir, is one of more than 200 chapters of similar choirs around the world, all of which volunteer their voices to sing to those who are approaching death or who are waylaid by a serious illness.

Bridge to Peace’s managing director Lucille Worone says the group’s purpose is to help comfort those in hospice care and offer companionship. The singing, “creates a contemplative, meditative space,” Worone says. Written by choir members from various chapters, the songs are typically one to three lines, sung repeatedly. For the most part, the songs are written without religious subject matter, so anyone can benefit regardless of their beliefs. (There are a small number of songs with religious connotations but they are only sung by request.) “You can see the people relax, sink into that quiet, a place they know they don’t have to do anything except receive the song,” Worone says.

Last year, the Calgary group, which has about a dozen dedicated singers, visited 77 hospice residents. These sessions spent with the dying are intimate ones, and often the singers are just as affected as their audience.

The choir’s member care director Diane Little recalls one particularly affecting story in which a man they sang for had himself been part of a choir for years and related to the group upon their arrival how sad he was knowing he would never sing in one again. “We paused. We didn’t try to fix it — try to make it nice — we simply accepted his words. That was where he was at in that moment,” says Little. “We asked him if he wanted us to sing, because there was a good possibility he’d say no, but he accepted our gift of song to him and he was deeply touched.”

Though the bulk of the sessions are spent visiting those in hospice care, anyone who feels a need can request a visit from Bridge to Peace. The choir also conducts “song baths” for cancer support groups and various other events, wherein singers encircle one or two people in reclining chairs and “bathe” them in their songs.

The group doesn’t ask for payment, as they consider their singing a gift and don’t want money to be a barrier, though they do accept donations.

Worone says her work with the choir has made an incredible difference in her own life, and that benefits extend to both singers and audience members. “I think being at the bedside of someone who isn’t a family member gives us an opportunity to be of pure service. It also gives us an opportunity to be taught what it’s like to live and die in hospice,” she says. “These people are our teachers and really give us a chance to ponder, reflect and be encouraged by their examples.”

Correction: A previous version of this story incorrectly captioned the photograph. The photograph shows the choir and attendees at the 2016 Equinox Vigil.

Vote for the Best Neighbourhood Gems in Calgary