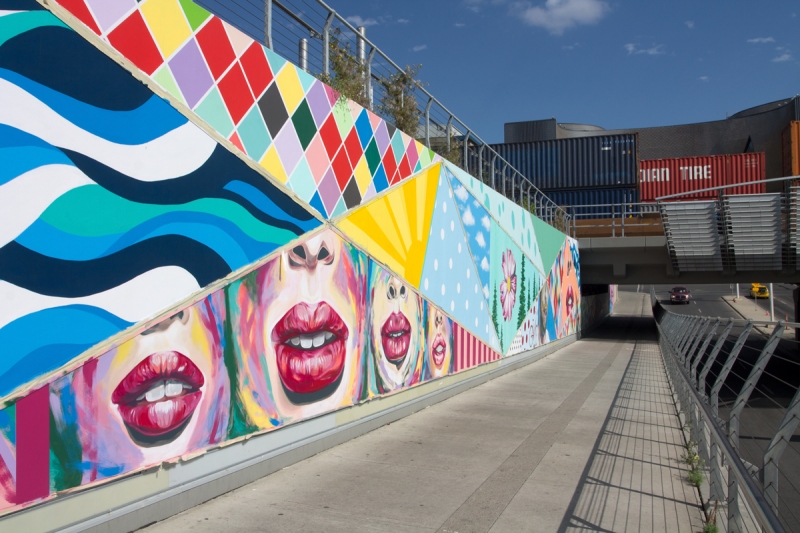 If you look carefully, you can spot signs of visual artist Michelle Hoogveld in several places around Calgary. You may recognize public pieces she’s worked on like the #BeCubed mural in Bridgeland, seen her work on utilities boxes or on the walls of local businesses like One Cycle Spin Studio. And if you drove under the 4th Street S.E. Underpass between June 15th and mid-July, chances are you saw Hoogveld painting her biggest project yet: a new mural called Corridor of Connection.

The mural is part of the Calgary Municipal Land Corporation’s Art in the Public Realm Program and connects the Victoria Park area to East Village. When Hoogveld was coming up with the design for the mural, she drew inspiration from the idea of connection and how it relates to Calgary’s connecting rivers and the area being a place where people came together.

It took Hoogveld around seven weeks and 70 gallons of paint to finish the Corridor of Connection mural, which spans 950-feet and runs along both sides of the underpass. The mural is broken up into dozens of triangles that Hoogveld filled with colourful images of flowing water, lips, rainbow checkers, nature, animals and more. We talked with Hoogveld to find out more about some of the hard numbers and stories behind specific pieces of the mural.

Corridor of Connection: By the Numbers

The length of the mural in feet

The number of weeks it took to complete the mural

Hoogveld painting some of the finishing touches on the mural in July. The blue and white lines on the right represent the flowing Bow and Elbow Rivers, a motif that appears throughout the mural.

Gallons of paint used to complete the mural

Number of red hearts in the checkered portions of the mural

Pairs of lips featured in the mural

Lips played a big part in Hoogveld’s mural design from the beginning. During the early stages of painting, Hoogveld had a private education session with elder Adrian Wolfleg where they talked about the confluence of the rivers, its importance over time and how community is expressed in Indigenous culture. “Through this discussion, we discussed the oral traditions of storytelling which added to the significance of incorporating the lips into the mural,” Hoogveld says. “I also wanted the lips to portray everyone as an expression of who we are and what we share and communicate with others ultimately connecting with one another.”

Animals in the mural

The mural features several animals including a magpie, a dog and a yellow bird. But this butterfly has special significance. Originally, the butterfly was going to be smaller, but Hoogveld decided to make it larger and more prominent after learning how butterflies “represent a vision or dream into the future” during her discussion with elder Adrian Wolfleg. To create the butterfly, Hoogveld had to run back and forth across the street to make sure the proportions looked right from a distance before painting it.

This painted image of the hand giving a peace sign is actually an image of Hoogveld’s own paint-covered hand.

Person doing a back flip