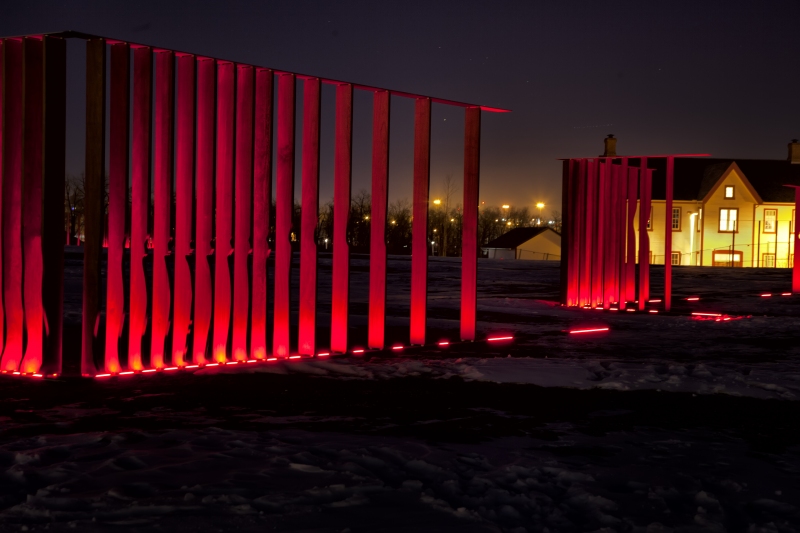 "Marking" as seen lit up at night. PHOTOS BY CARLOS AMAT

The city of Calgary can trace its history back to 1875, when the palisades of Fort Calgary were first erected. Contrary to the typical image of impregnable walls the term fort stirs up, the original Fort Calgary only stood for 6 years before falling down, a fate the fort’s newest structuring is hoping to avoid.

Titled “Marking,” the 2.7 meter tall, 71 by 72 meter structure (the dimensions of the original fort) literally builds on the site’s history, according to Fort Calgary president and CEO Sara-Jane Gruetzner. “The original palisades of the fort are still there, we had to excavate down to the top to find out where that was,” she says. “It’s been capped, but when we built that fort we had to make sure we it’s literally on top of the original fort.”

Gruetzner says “Marking” is more of an interpretive exhibit than public art. It represents people past, present and future coming together at the intersection of both the city’s main rivers as well as its multitude of ideas.

For Jill Anholt, the artist behind the work, inspiration came from both the permanence of the prairie landscape and the ever-shifting prairie grasses transformed by the wind. “Those ideas came together with this notion of creating a marking that marks the location of the original fort but allowed the prairie to continue to blow through it and show that temporariness and the relationship between what is temporary and the human marking upon the land.”

Anholt, who is also the artist behind “Transit Story,” the grate-commuter statues found on the Centre Street CTrain platform, says every detail of the structure carries a particular meaning. The red, self-adjusting lights that illuminate the outline of “Marking” at night are meant to create a link with the other red-lit structure in the East Village as well as evoke the Mounties’ red uniforms. The dozen graded profiles carved into the wooden panels are meant to cover a gamut of characters who might meet at the fort, from North West Mounted Police in full regalia to young girls and boys and people of all creeds and ethnicities.

Why this symbol rather than a straightforward recreation? The original location of the fort made it a fire hazard, as seen when its latest incarnation burned down in 2003. In addition, it was a difficult structure to keep secure. People would steal away inside and perform “non-conforming activities” there, far from public scrutiny.

Mainly, says Anholt, the structure “is meant to be very open and fragile, almost a remnant. It’s meant to feel open and permeable and anybody can move in and through, and that the prairie grasses can move through as well.”

Though the construction of “Marking” officially ended on November 2, it won’t be open to the public until next summer, as the grassland around the site needs time to recover. Until then, you can always bone up on local history by visiting the Fort Calgary interpretive centre. 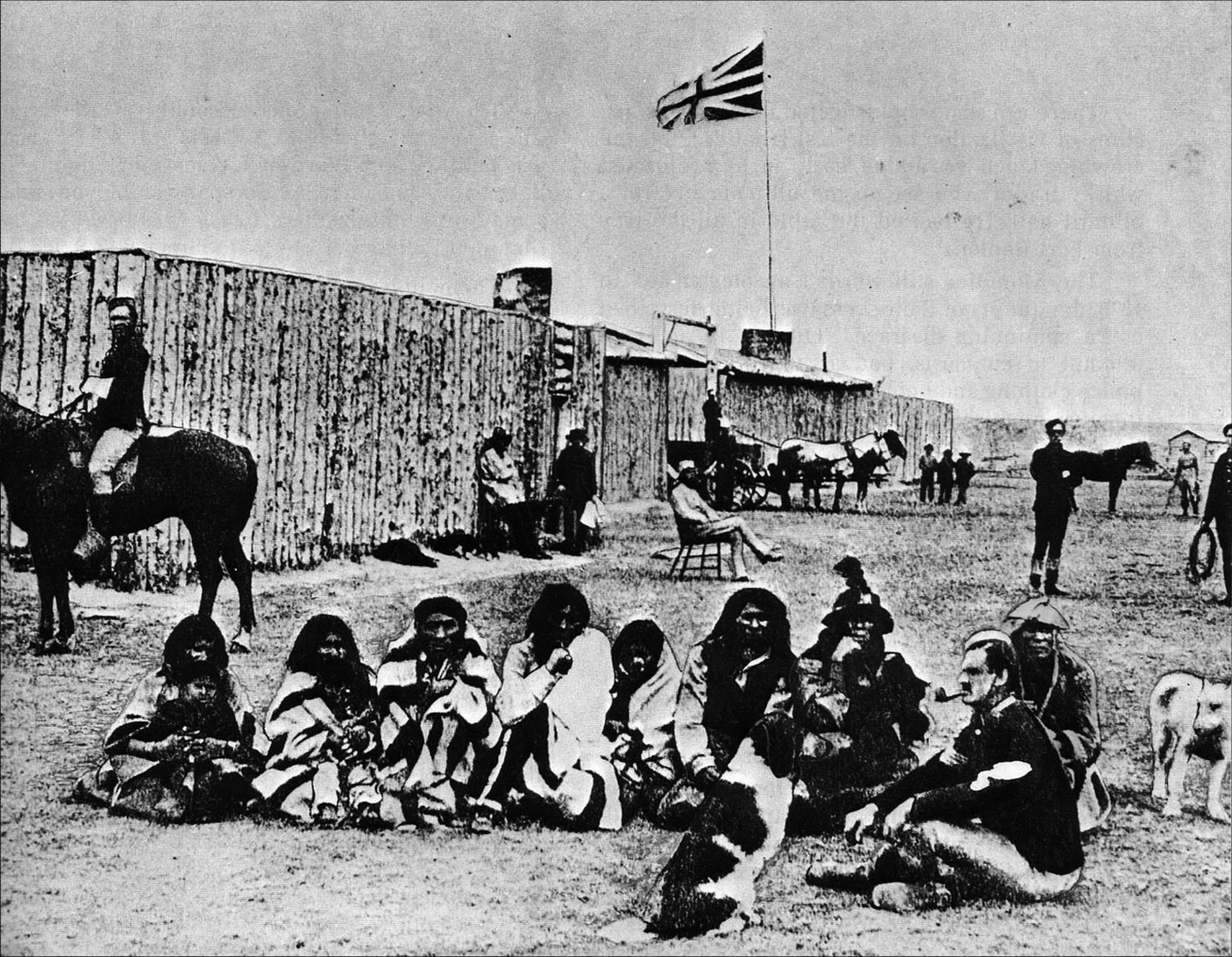 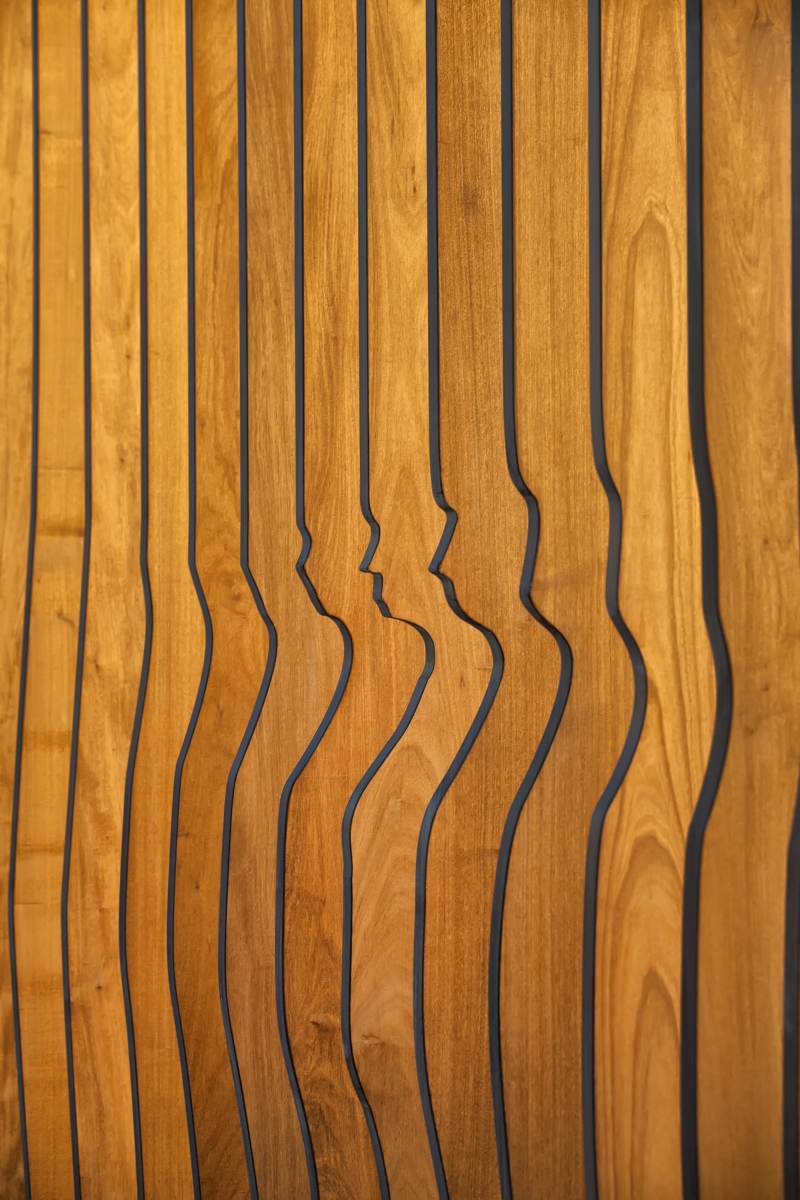 A close up of one of the graded profiles integrated into “Marking.” 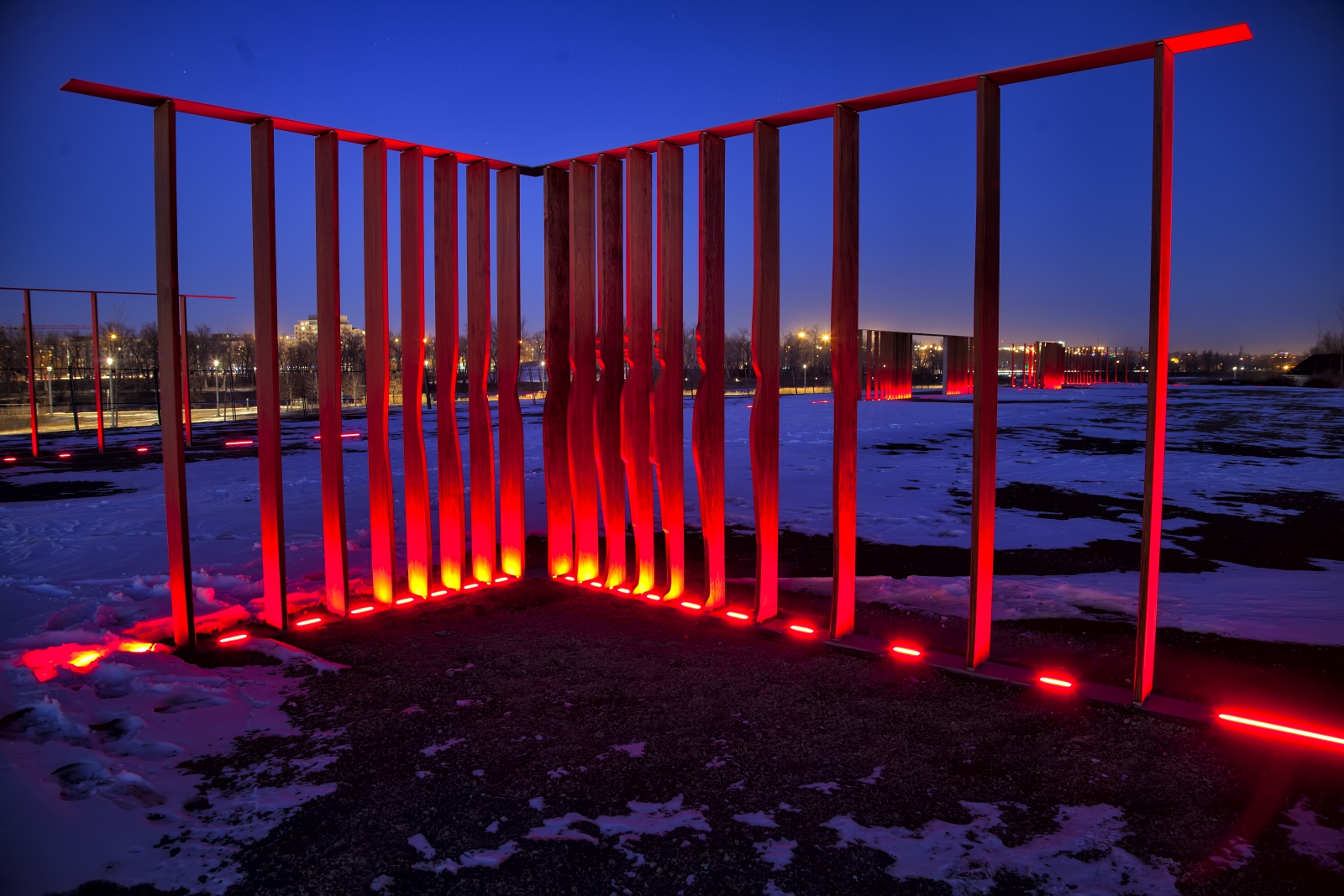 The light fixtures in the installation are light sensitive and activates as it gets darker outside.