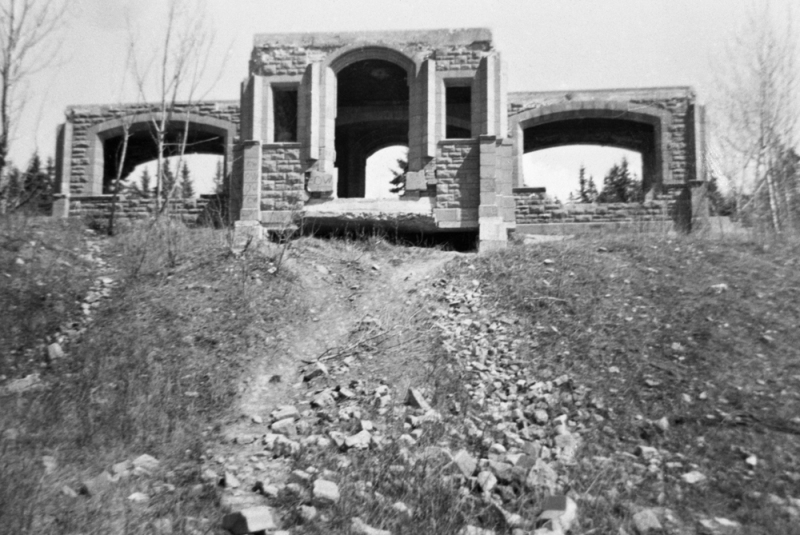 This photo from 1941 shows the incomplete sandstone mansion near the beginning of its long decline. Image from Glenbow Archives NA-5459-1.

Lindsay’s Folly is what’s left of a massive 1913 sandstone dream home partially built near the Elbow River, close to 34th Avenue and 4th Street S.W. At its short-lived best, it was a full storey of arched sandstone, supported by chiselled columns and wide steps, curling toward a sweeping panorama of Calgary overlooking the Elbow. This city’s history has been written in chapters of resource-driven booms and busts. So it might be apt that the nearest thing we have to a historic ruin stands sentinel to one of Calgary’s first prominent residents, who had everything, then lost it all.

Tradesmen and labourers finished the foundations, assembled the main portico and erected soaring archways of sandstone salvaged from the city’s first Knox Presbyterian Church, before construction suddenly ceased, never to resume again. What led to the home being abandoned on a beautiful riverside lot has become the stuff of Calgary legend.

Now, all that’s left of Lindsay’s Folly, or Lindsay’s Castle, as it’s sometimes known, is one sad brick foundation wall and some shredded and bubbled concrete. To understand why the ruins are significant, you need to first understand a bit about the man who ordered the home’s construction: Dr. Neville Lindsay.

“Neville Lindsay, even without Lindsay’s Folly, is an important figure,” says Harry Sanders, a well-known and respected Calgary historian. “He arrived on the first passenger train [on] Aug. 14, 1883. He’s an early physician; I think he’s one of the first people who organized a Masonic Lodge in Calgary. During the Klondike gold rush, he hears the call of the gold rush, and evidently he becomes one of the few who actually came back with money.”

Lindsay ran a bustling medical practice in Calgary, and, after growing his fortune locally, then striking it rich in the north, the doctor’s preferred investment for his money was real estate. He owned several properties in the city including the Isis Theatre and the original site of the Knox Presbyterian Church near Centre Street and 7th Avenue (later the site of the York Hotel). It was his intention to demolish the church to make way for a large business block on the site. And, in what could be considered an early example of “reuse and recycle,”

Podcast: Erin Lawrence and her husband Roger Kingkade search Stanley Park for the ruins and talk about what makes the property interesting and important. Listen here.

Lindsay engineered a plan for the building’s magnificent sandstone; he’d use it to build his dream home on the banks of the Elbow River. No blueprints exist for the planned mansion, but it’s believed 12 to 14 rooms were drawn up for the home. However, mere months after the sandstone portico took shape, work at the site ceased. Legend and lore tell several stories about why. One suggests Lindsay’s beloved wife died suddenly, leaving him heartbroken and unable to fathom living in their home alone and broken. Another tale says the hillside location of the home became too weak and unstable to support the home’s weight, and the doctor was forced to abandon the site.

“Neither story is true,” says Bill Walsh, Lindsay’s grandson, who still lives in Calgary. “What happened, as I was told, is he had gone down to New York and he had arranged for a million-dollar mortgage to finance these three buildings, so he did that and came back and started working on the buildings. The First World War broke out and the mortgage was cancelled. He had no income, because he was retired by that time. But, when he died, he was essentially broke.”

The property remained fenced off for years after it was abandoned, and stayed that way until Lindsay’s death in 1925. In 1936, Lindsay’s widow, Florence, lost the land and what remained of the building to the City of Calgary over outstanding taxes. From the 1930s onward, the site was a curiosity; children played near the abandoned home and scavengers picked away at what remained of the building materials over the years. According to oral-history interviews conducted by Sanders, steel beams from the site were removed at some point during the Second World War, but the sandstone archways held for years more, until they, too, mysteriously vanished.

Sanders compiled a lengthy research document on the ruins back in 1990 for the City and unearthed a written description of the home from an old news clipping from a 1930 edition of the Calgary Albertan: “The house still remains unfinished … with gaunt columns striking into the air and tall iron beams outlined skeleton-like against the sky.”

Calgarian Hector Lamont stands inside the arched doorway of Lindsay’s Folly, circa 1940.

Sanders also did extensive interviews with Calgarians who used to play amongst the archways around the home. One of the children that used to play amongst the ruins was Walsh, who knew from a young age this crumbling playhouse belonged to his family. “There were tunnels underneath it,” Walsh recalls. “They built tunnels to house the utilities, so you could go into these tunnels to crawl around underneath it.”

For more than 40 years, the home stood in disrepair next to the Elbow, before the sandstone structure vanished, leaving slabs of concrete as the only marker for the former semi-grandeur. What happened to the sandstone archways is a bit of a mystery; some historical documents note the old, uncared-for ruin must have just crumbled thanks to its decades-long dance with Mother Nature, with scavengers scooping up the sandstone for gardens and home projects. Other documents suggest the City, out of some sort of safety concern, may have bulldozed the structure to avoid liability. Either way, the last time the site had any magnificence was in the 1950s.

Today, there’s almost nothing left – just a sagging red brick wall and some pitted concrete that doesn’t have anywhere near the cachet or the beauty of the ruins of the first Calgary General Hospital, also known as the Rundle Ruins, near the Stampede Grounds.

However, the story behind what happened to Neville Lindsay’s dream home, and its parallels to Calgary’s own boom-bust tale, is much more romantic and enticing than bureaucrats dynamiting a later incarnation of an old hospital. For that reason, there is a plan, albeit a slow-moving and amorphous one, to preserve and possibly even restore the Lindsay ruins.

The City has its eye on a redevelopment of Stanley Park, where the ruins sit. Doing something to mark the Lindsay site is part of these plans, but what exactly that might look like is far from decided, primarily because those plans are still at the concept stage. “It’s not down to the nitty-gritty details of every component and what it will look like,” says Michelle Wong, project manager of the Stanley Park redevelopment project for the City.

However, the City knows there’s affection for the site and perhaps even a place for it in our history. Sanders thinks the ruin is not just about the city’s past but about making history tangible for future generations. “It’s a physical manifestation of a historical set of events,” argues Sanders. “It’s important as a physical symbol of those events, and it’s got this intrinsic appeal of a ruin. You don’t even have to know the story, you just come upon it and you say, ‘This was going to be something special to whoever was building it.'”

Walsh is also looking to the future when it comes to what should become of what his family likes to call The Castle. His preference for the site would be for the City to re-establish a place where the neighbourhood could gather and where once again children could play and use their imaginations.

“If there was a vision of creating something of value to the city, to the community, connecting it to the Southern Alberta Pioneers, to the bike path around Stanley Park, that would be worthwhile,” he says.

But, for now, the ruin will have to wait as the City contemplates whether it’s entering another bust cycle.