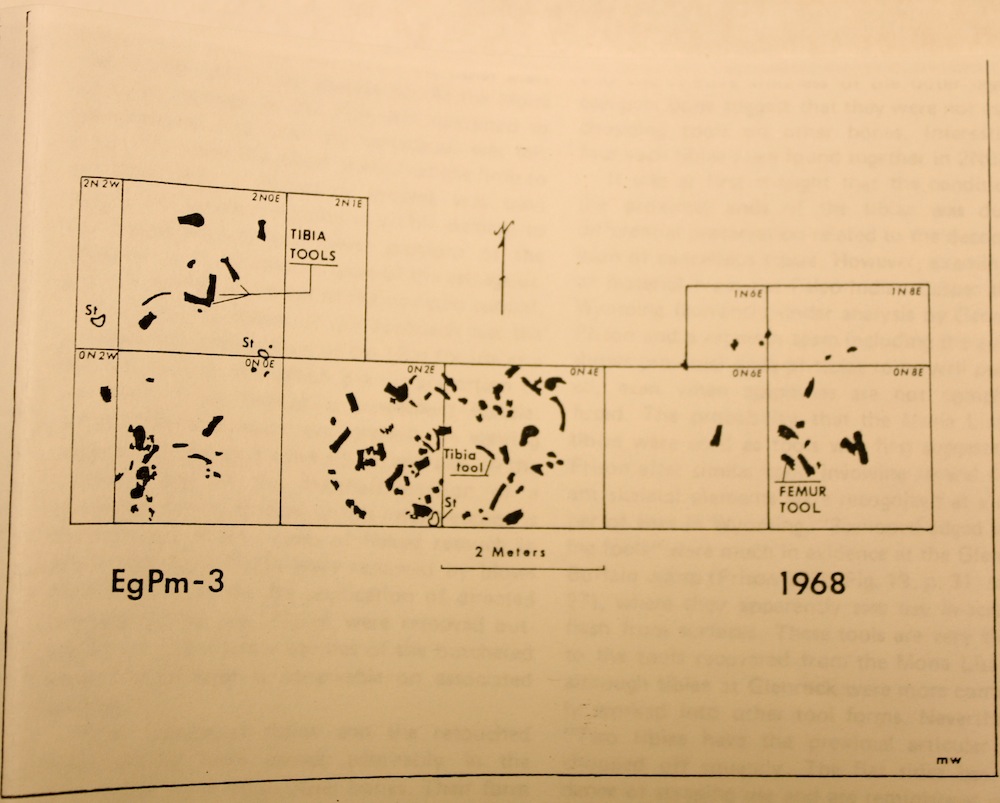 The Story of Mona Lisa’s Bones

What’s buried under this local art store goes back 7,000 years.

A Memento from the archeological dig that took place on the site of Mona Lisa’s Artist’s Materials.

The location of Mona Lisa’s Artist Materials on 7 Street S.W. has been in store owner Marc Beeger’s family for generations. His grandfather first opened the Buy-Rite grocery store where Analog Cafe now stands. “My grandfather and my father gutted out the stockroom [of the grocery store] in 1959 and that became Mona Lisa Art Salon Ltd,” says Beeger.

But the story goes back further than the ’50s. About 7,000 years further, actually. When John Beeger, Marc’s father, decided to build a basement for the burgeoning art store in 1968, they dug deeper than the nine feet most owners would have at the time, going about 12 feet deep. “My dad was walking around the excavation before they started installing, and he noticed some unusual things in there that didn’t look like they belonged,” says Beeger. “He phoned up the university and talked to Dr. Brian Reeves, who came out and asked if they could do an excavation here.”

Teams from the University of Calgary worked quickly during the next month scouring the lot, as the cold weather, snow and pressing contractor schedule restricted their timeframe. They uncovered a series of bones belonging to an extinct buffalo species known as Bison Occidentalis, a direct ancestor of modern plains and woodland bison.

A layout of the Mona Lisa dig site.

“I went down to the pit at one point and thought ‘Wow, this is kind of cool, this doesn’t look too hard,'” remembers Beeger. “All the bones had turned to clay. It’s not like an Indiana Jones thing, where you’re just brushing things off and they are already hard. This was clay. You could run your fingernail across it and slice through the bone.”

The concentration of remains, along with evidence of some basic scraping tools, indicated that this was a location where prehistoric man had been killing and butchering bison more than 7,000 years ago.

The Beeger’s have kept a scrapbook through the years, including a number of articles and documents related to the discovery. In one letter from the collection, dated January 21, 1969, Brian Reeves, a professor of archeology at the University of Calgary, wrote to John Beeger, thanking him for the chance to look at the bones under the building, noting that “sites of this age are relatively rare and any information recovered will add considerably to our knowledge of prehistoric man at this time.”

Beeger’s scrapbook contains numerous documents relating to the dig, like this article from The Albertan.

Though the finding was national news at the time, the grounds have long since been covered up in order to fulfill their original purpose storing paints supplies. If you were still hoping to see bones older than the pyramids, you’re in luck. Beeger still has a case containing a hardened bone from the dig that was gifted to his family by the University of Calgary. Though the bone is kept in storage for safekeeping, if you’re really nice, maybe he’ll let you see it!