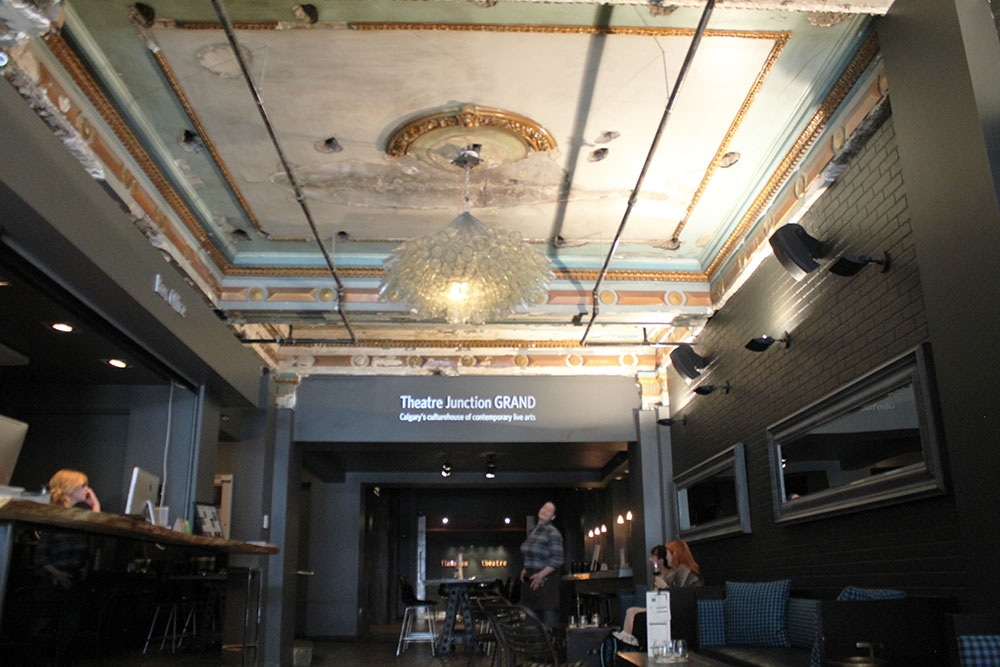 “I grew up in Carstairs, just north of Calgary, and I remember coming to a couple of films here as a teenager,” recalls Lawes. “But I had no idea of the history and scope of the building.”

In a way, that’s not surprising. The Grand Theatre, tucked away between 6th and 7th Avenues S.W., doesn’t strike passers-by as having much of a history. If it weren’t for the marquee outside, it would be entirely unassuming. And yet, the theatre, built in 1912 as part of the Lougheed Block by Sir James Lougheed, was home to many of Calgary’s first artistic companies. And it welcomed a number of famous names in its time, including Fred Astaire, Sarah Bernhardt, Robert Borden, the Marx Brothers, Nellie McClung and Sergei Rachmaninoff, to name a few.

Originally named the Sherman Grand in honour of Bill Sherman, its first manager, the name was changed to Grand Theatre when Sherman was fired in the summer of 1914 following a series of poor business decisions. At the time, the theatre counted 1,350 seats upholstered in green leather with 810 on the main floor and 540 in the gallery.

During the 1920s and 1930s, the Lougheeds suffered a number of financial setbacks and at one point the total revenue generated by the theatre was $100 a month. In 1936, the theatre only operated 33 days. The Grand was saved from these circumstances when the Lougheed Block’s lease was split from that of the theatre, which J.B. Barron (of Barron Building fame) took over in 1937. Barron eventually linked the theatres to the Odeon chain in 1941 in order to assure a steady supply of first-run pictures. The completion of the Jubilee Auditorium in 1957 meant the end of traditional theatre performances at the Grand, which became a full-time movie house.

The rise of television in the 1950s saw a decline in attendance at the Grand. The Barron family invested $500,000 to turn the theatre into a full fledged movie theatre, installing new seats and a new sound system and moving the screen back 12 feet to enlarge the lobby space. “We would like to have kept up the Grand as a site for legitimate theatre, but we just couldn’t compete with the Jubilee Auditorium‘s seating capacity and modern sound and stage equipment,” Barron told the Calgary Herald in 1965.

The Barrons ran the theatre until 1969, when it was taken over by Odeon, who split the auditorium into two twin, 625 seat theatres. In spite of a half-million dollar renovation in the 1980s, by 1999, Odeon, now Cineplex Odeon, chose not to renew its lease. In subsequent years, the Grand housed an indoor golf driving range and faced questions of demolition in favour of more commercial space or even a parkade.

In 2004, Theatre Junction was gifted the sum of $1 million by Calgary philanthropist Jackie Flanagan to purchase the theatre. It raised another $10 million to buy the building and begin renovating.

“People were golfing here when we got the building, so it had really fallen into disrepair,” says Lawes. It wasn’t a restoration project. It was more like, how do we take the bones of the old theatres and remix it into something new that can be functional for today, that allows you to follow a map of the past. It was re-imagining the old walls into a contemporary performance space.”

After a year and a half long renovation, the theatre reopened as Theatre Junction Grand in 2006, returning the building to its theatrical roots.

Theatre Junction’s renovation saw a number of old features returned, such as the original ceiling from 1912. The ceiling still has scars from its many prior renovations, including a number of holes used by Odeon to install a cork board ceiling, which completely covered its art deco style. The chandeliers were made by Montreal artist Eric Sauv using broken wine bottles.

This terrazzo floor, installed during the Barron’s stewardship of the theatre in the 1930s, was uncovered and left as is during Theatre Junction Grand’s renovations.

This room on the second floor, which once housed a small concessions stand, is now known as the “vintage room.” It’s used for hosting guests and small parties. The walls show the layers of renovations that the theatre has undergone.

The mezzanine on the second floor is approximately four feet lower than the original mezzanine, a change made in order to facilitate entry to the theatre space. Wall space right under where these frames are hung still shows where the original floor once stood.

This rehearsal/theatre space still has the entryway and projection room, seen here approximately five feet above the floor. It was the first space in Calgary to project movies.

This wall just outside the green room on the lower level is covered in the signatures of famous artists and performers who have performed at Theatre Junction Grand over the last nine years. This tradition was inadvertently started by J.B. Barron when his signature, dated August 13, 1935, was found on one of the walls of what is now the coat room. It has been framed for all to see.