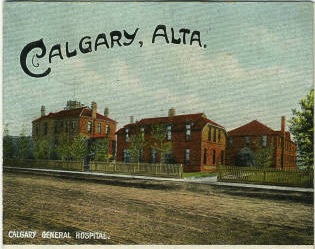 The Story of the Rundle Ruins

These sandstone markers once helped a burgeoning Calgary survive sickness.

Walking home from a game at the Saddledome, you might have come across giant sandstone ruins just off of 12 Ave. and 6 Str. S.E. You might assume them to be the remnants of some once great fortress used to defend some strategic site by the river, but they are, in fact, all that’s left of Calgary’s second general hospital.

The building’s cornerstone was laid September 1, 1894, and built using Romanesque designs by architects Child and Wilson. It was the first ‘real’ hospital in the city (the first actual hospital was just a rented two-storey house located at 733 7th Ave S.W. that had four beds and even a few bullet holes). These ruins were from a building that initially had 35 beds, a nursing school and an operating room, with several additions coming in subsequent years, including two maternity wings and a second ward. Modern for its time, it had electric amenities, telephones and a signal bell system.

A postcard featuring Calgary’s second general hospital as it once was.

By 1908, the city’s growth meant the hospital couldn’t keep up, and so a third general hospital was built across the Bow River, and the second was relegated for use as an isolation hospital for those with chronic illness. In 1954 the new hospital got its own isolation wing and the Rundle hospital’s patients switched homes in a move dubbed “operation measles.”

Vacated of its chronically ill, the United Church of Calgary rented out the facilities in 1956, opening a seniors’ residence. The Rundle Lodge operated until February of 1971, when the property was acquired by the Metropolitan Foundation of Calgary. After a contentious debate on the historical merits of the site, the hospital was demolished in 1973.

The sections you see today were incorporated by the Alberta Housing Corporation into Victoria park and dedicated on June 11, 1974 by then Premier Peter Lougheed, who called the park’s setting in downtown Calgary “a beautiful bringing together of the old and new, of the future and history” according to the Calgary Herald coverage at the time. Today, the park still bring together the old and the new by attracting shutterbugs and Instagrammers to snap shots at Calgary’s very own photo-op-ready ruins.

The front entrance of what was once the general hospital.

The corner stone is inscribed with the names of the hospital’s board of directors and others integral to its founding.