Walk through the East Village and you’ll come across across the St. Louis Hotel. Once a seedy hotel with a rowdy bar in the basement, the building closed in 2006. It was recently renovated and restored, and it re-opened earlier this month. Now, it is home to the Calgary Municipal Land Corporation (CMLC) offices.

From 1914 until 2006, the atmosphere here was a lot more raucous and a lot boozier. You’ll still find the same neon sign out front that was here before it closed, but changes have been made to the building so that it can stand for at least 100 more years. While the building will stick around, it’s important to remember the character the building once had.

George Stephenson Senior, a well-known local entertainer, (and the founder of the venue’s famous indoor horse races), began frequenting the bar in the Louis from the 1950s. His son, George Stephenson Junior, began joining him in the 1980s. 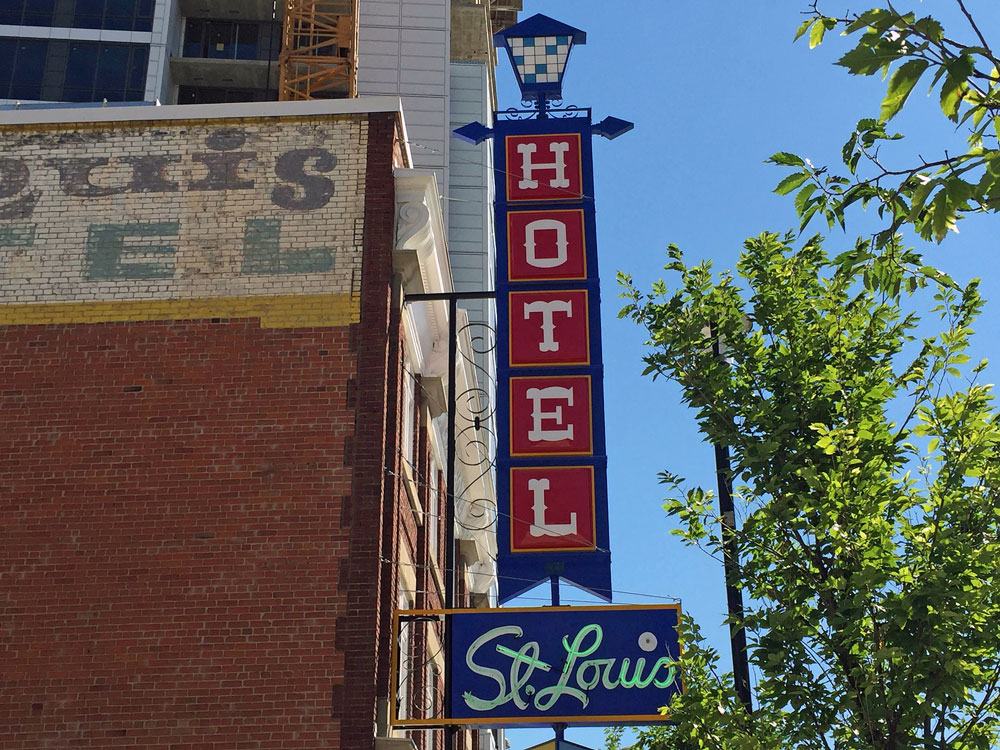 The story of the regular who was a well-known entertainer

The St. Louis’s claim to fame has a lot to do with George Stephenson Senior. He was an entertainer who also worked in the oil business, and who frequented the St. Louis since the 1950s.

“My dad was an entertainer all his life. He entertained more than 6,000 shows around Alberta. He did all the police shows, he had been the MC at the Grey Cup, he was the MC at the Bullshooters Breakfast every Stampede for 20 years, he helped out the Flames. He was a musician and a comedian – he was well-known and he loved telling jokes,” says Stephenson Junior.

The story of the work that didn’t get done

Every Friday, the rowdiness at the Louis would kick off at noon. Stephenson Junior says people would head down there at 12 p.m. and then not go back to work. “It’s Friday afternoon and the jugs are flying, music is playing, you’re hearing jokes,” says Stephenson. “It’s one of the best days of the week – who wants to go back to work then? If people got smart, they’d bring their bosses down with them.”

The story of the napkin that really got things rolling

George Stephenson Senior, George Stephenson Junior and a few other men were at the St. Louis on a Friday afternoon in 1985. It was like any other Friday afternoon, except Stephenson Senior came up with the idea of a horse race – it was just a little game for the men at the table. He picked a bunch of imaginary horse names, wrote them down on a napkin, and the men put their initials next to the horse they thought would win.

Stephenson Senior was the race caller, calling out the imaginary race as a caller at the Kentucky Derby or the Royal Ascot would. But he made up the entire thing, calling out the results as if he was watching a real race. He also made up which horse won. At the end of the race, the winner had to buy a jug of beer for the table.

The story of the really rowdy (and fictitious) indoor horse races

The imaginary indoor horse racing didn’t stay confined to their one table for very long. “Pretty soon, the table next door wanted in on it. Then the next. It got to the point where my dad was yelling pretty loudly because there were six or seven tables playing this game,” says Stephenson Junior. “Soon, enough people were playing that my dad used the microphone up front to broadcast the game to the bar.”

Stephenson Senior printed out racing forms. There would be four races and each race had eight imaginary horses. Participants would write their initials next to the horse they thought would win – Old Army was a favourite horse – and they’d put a dollar on the table. The winner got $8. (The reason the City didn’t get upset with this because it wasn’t really gambling – there was no profiting.)

“He’d take the sheet and have the race in his mind. He’d yell into the microphone like a real race caller – he’d have the horses coming back and forth, and bumping into each other, and photo finishes and everything! He’d call the race whatever way he wanted. You almost hated winning because there was almost always an objection.”

The story of the St. Louis’ big popularity boom

Pretty soon, you essentially had to be a VIP to even get into the Louis on a Friday afternoon. You needed reservations if you wanted a table. (Although the man that made the reservations, John, had to know you.)

Things really took off during the 1988 Winter Olympics. “All the TV crews around the world came in and filmed the races, even the BBC. They talked to my dad, interviewed him, the Olympians came in to see what it was all about,” says Stephenson Junior. “He even did these races in the USA and as far away as Hong Kong.”

The story of the Stampede musicians

From the late 1980s until 2006, the Louis was booming every Friday afternoon. But during the Stampede, the Louis was packed with people for the entire 10 days. Usually, the Louis’ basement would fit about 250 people. During Stampede week though, it was standing room only. Stephenson says they would cram up to 450 people inside.

The spot was particularly popular for travelling entertainers looking to make a little pocket money during Calgary’s biggest event of the year. “A lot of the entertainers would play their music, standing on the street corner with a guitar or violin, or they’d whistle or juggle. And lot of them would go down to the Louis [to perform] and they got to know my dad. The musicians really connected with him,” says Stephenson Junior.

“A lot of the performers came back every year – they saved up money just to work the shows and the streets during the Stampede. I remember there was one fiddler guy who wouldn’t miss the Stampede at the St. Louis for the world. He would come down for 20 years, always for Stampede.”

The story of Superman

The Louis’ character and location made it an ideal backdrop for movie scenes. You’ll probably recognize it if you ever watch the 1983 movie Superman 3. Christopher Reeve was filmed sitting at the Louis’ bar and eating a bar snack and leaving the bar in full Superman attire. The film’s producers didn’t try to disguise the Calgary skyline or cover up the St. Louis sign – it’s easy to see that this building was part of this film.

The story of Ralph Klein and the walkway

“Beside the St. Louis was the building’s parking lot, and a lot of people got used to park their car there and then go downtown. We complained about it because we had to park in the City lot behind the building. Instead of being able to walk straight to the Louis, we had to walk all the down the end of the fence to come around.

So we mentioned that to Ralph Klein. The very next day the crew came out and put a walkway through so it was easier to get from the lot to the Louis. I think it’s funny that he immediately took care of his drinking hole by putting that walkway in,” laughs Stephenson Junior.

The story of the shuffleboard champs

The St. Louis basement had one pool table that Stephenson remembers being used a lot and one shuffleboard. And the shuffleboard players were really good. Stephenson says that four of the regular guys he used to sit with every Friday afternoon were the citywide shuffleboard champions for four or five years in a row.

The story of the Christmas parties

Geroge Stephenson Senior threw a Christmas party in the St. Louis basement every year. “At the Christmas party each year, we would all raise money that primarily went to the Salvation Army. Each year, on the Friday of that party, we raised between $3,000 to $4,000 for the Salvation Army,” says Stephenson Junior. “We’d pass a hat around for contributions and people were very generous.”

The story of the chicken and chips

The St. Louis was never known for its food and certainly was never considered a must-visit restaurant by the fine dining lovers. But for Calgarians looking for cheap, satisfying, greasy food, the St. Louis’ menu hit the spot. “The bar was known for its chicken and chips,” says Stephenson Junior. “For $3.75 you’d get two pieces of chicken and those big wedge potatoes.”

Stephenson Junior says, chances were, you went home smelling like chicken and chips even if you weren’t eating it that night. The St. Louis was filled with strong aromas: smoke from patrons lighting up cigarettes indoors, steam from the kitchens – Stephenson isn’t sure how often the oil was changed in the kitchen because it could get steamy in the bar when the fryers were going – and of course, fried food and beer. “People would go home and their wives would say, ‘you’ve been down at the Louis – I smell it!'”

Other memorable items on its menu included really, really big cabbage rolls for $1 each, the $3 corned beef sandwich and the kielbasa sandwich on a bun for $1.50. But the St. Louis’ claim to fame were the chicken and chips.

The story of the St. Louis’ final day

The Louis’ final day was just like all its popular Fridays over the past several decades. (Except for the tuxedo T-shirts.) The space was packed with people. There was beer and chicken and camaraderie. And George Stephenson Senior did one last run of the world famous indoor horse races.