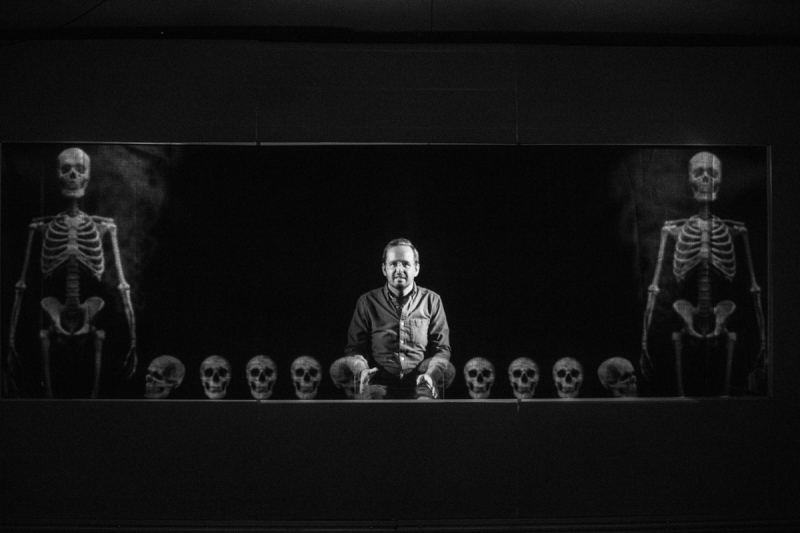 Jay Whitehead in The Confession of Jeffrey Dahmer, a co-production of Theatre Bsmt and Theatre Outré. Photograph by Jaime Vedres.

A basement is a dark and scary place when we’re young, home to monsters and other horrors conjured by an impressionable mind. Venturing down dimly lit stairs could stir up feelings of unease, even dread. But even back then, we could also sense the thrill that comes with confronting the unknown.

That emotional mixture is what Theatre Bsmt, the city’s only horror-focused theatre company, taps into. The company functioned for eight years under an emerging-artist mandate before making the switch to scary in 2016. Its first show under the new mandate was The Underneath, a story of monstrous, tentacled creatures from the deep that terrorize a small town, complete with mysterious disappearances and creepy children.

The reaction, says artistic director Ryan Reese, was significant. “There was a huge response from the community that we didn’t expect. There were horror fans, people in the theatre community, but there were also people that didn’t get out to the theatre that came to see our production,” he says. “That was surprising, so we just decided to keep going.”

Its next horror production was The Curing Room, which Reese describes as “a pretty heavy play about cannibalism,” featuring a fully nude cast. The Curing Room sold out performances in both Calgary and Lethbridge and even saw an audience member faint mid-play. Needless to say, the shows are making an impression.

In Reese’s opinion, the renewed interest in frightening tales is in part thanks to smart films like Get Out, It Comes At Night and Hereditary, that are bringing fresh stories to the genre. “I would say we’re living in a renaissance; I don’t think a lot of people realize that. There are all these wonderfully crafted, emotional stories around scares,” he says. “We’re getting films that stick with you afterwards because you see images and situations that are quite frightening, that seem to remind us of issues in the present.”

To Reese, the theatre format complements a particular trait of the genre, which is taking the audience into consideration every step of the way. “We need to do things that make them feel safe, but also make them feel scared,” he says. “Crafting horror theatre, you’re creating an enclosure for something scary. How close you let that thing come to the perimeter of the fence is where the fear comes from. The fence should never break, because then the audience will feel unsafe. But, if you let that thing get close enough… ”

The pop-up nature of Theatre Bsmt (it hasn’t performed in the same venue since taking on its new mandate) means its shows are often announced only a month or so in advance of opening night. But regardless of when you see a show, it’s likely to stay with you long after you walk out into the night. “The thing I hear the most is that people are glad they came,” says Reese. “They don’t say they’re happy, or overjoyed, they say they’re glad they came and experienced it.”