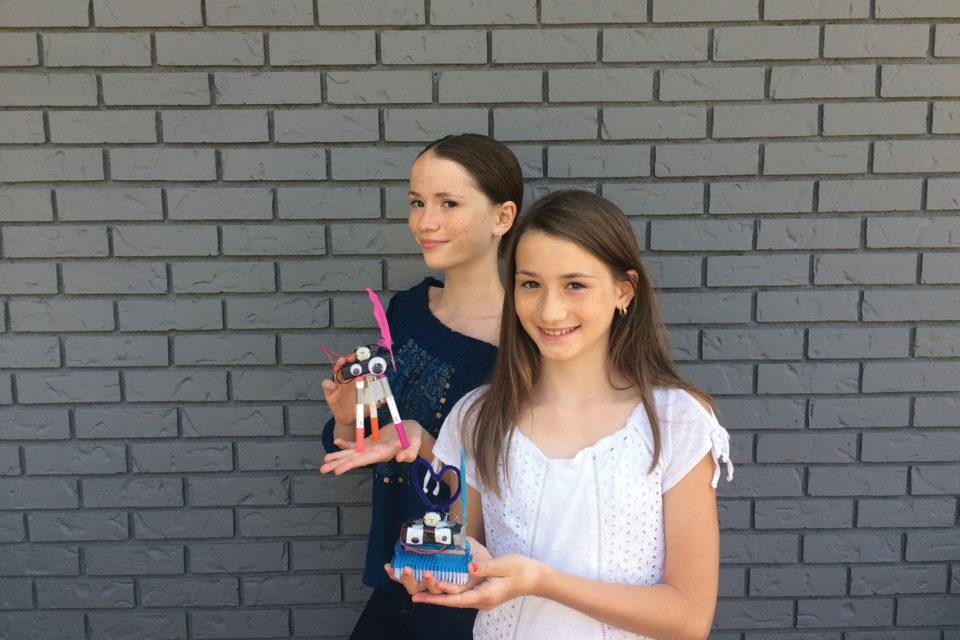 Like many entrepreneurs, Robots Are Fun CEO Lauren Voisin, age 14, got her start in business when she noticed a hole in the market. Back when she was six, she took to assembling science kits. The more kits she did, the more she saw room for improvement that she believed she could address.

So, six years ago, at the age of eight, Voisin started her own science-kit company. “I wanted to give kids a way that they could build robots and learn what the components do and how they work together,” she says.

Lauren now runs Robots Are Fun along with her 15-year-old sister, Ashley Voisin, who serves as chief creative officer. The Voisins manage the company around their schoolwork (Lauren is home-schooled and Ashley is a student at Bishop Carroll High School). Robots Are Fun sells robotics kits priced around $10 to $20, available by contacting them directly through their website, (robotsrfun.com). The kits offer different levels of complexity, with advanced kits building on the knowledge imparted by simpler ones.

Lauren primarily designs the kits and presents at events — in 2017 she appeared at the UN Global
Compact Network Canada’s Gender Equality Forum in Toronto. Ashley ensures the products are on-trend and marketable, and also plans Lauren’s presentations.

Together, the sisters also run teambuilding exercises with companies and do workshops in classrooms. “Imagine a class full of grade two students, and they’ve gone step-by-step to learn how to build a robot and how the circuit works. They turn the robot on all at the same time and it’s like this eruption of excitement,” Lauren says.

The Voisins say moments like that are the most rewarding, but as young female entrepreneurs, they have their fair share of challenges, as well. “We’ve been told that this isn’t for girls, or this isn’t something we should be interested in,” Lauren says. “But we’ve also done activities with people in the technology industry, and they’ve said it’s changed the way they view their job.”

At one of their workshops at a Telus Spark adults only night back in 2017, the sisters were demonstrating their Brushbot kit, a motorized household scrubber with optional googly eyes that moves by vibration. Curious engineers approached and soon began enthusiastically building their own. “They had so much fun adding more power to see how well they could make it work, and what the best design was,” Lauren says. “We get people like that a lot.”

Ultimately, the sisters say Robots Are Fun exists to teach and inspire — the low prices of the kits yield only modest profits — but the company has also benefited the Voisins in other ways. “It has made me a lot more assertive and it’s given me a lot more confidence,” Ashley says. “It’s extremely validating when we see the impact we’re having on the people we’re teaching; it just makes it worth our while. And worth their while.”