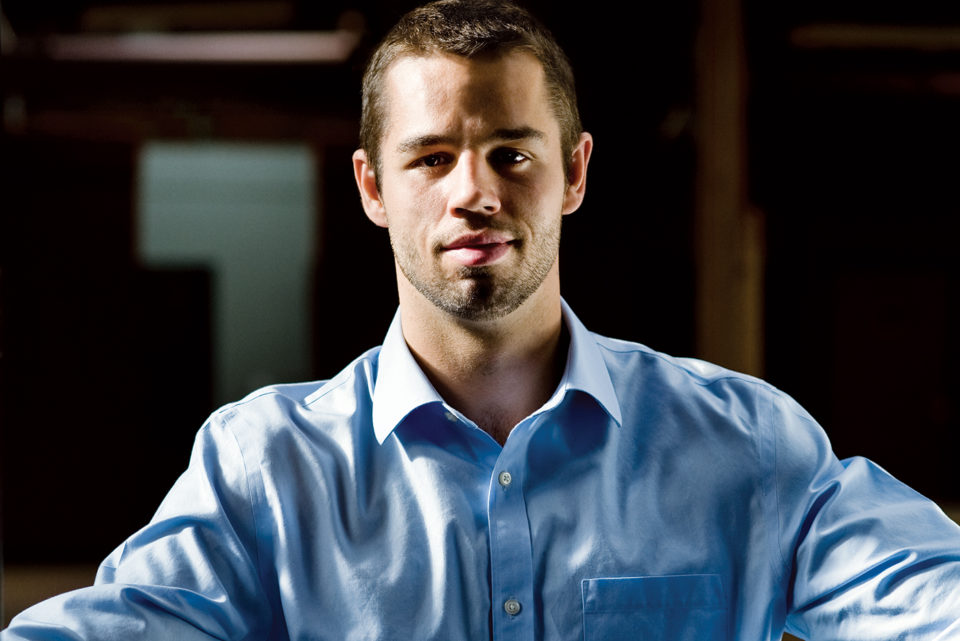 To some, the London, Ont., native is the mild-mannered Survey Analyst at Stantec Consulting Ltd., a job that has him turning the community-planning documents created by engineers into GPS plot points so on-site land surveyors know where to put things like sidewalks and manhole covers.

To thousands of screaming Calgary Roughnecks fans, he is the assistant captain of their favourite team, hard-hitting #16 on defence and the only member of the Roughnecks to be picked for team Canada’s 2011 World Indoor Lacrosse Championship run this past May.

That double life might be a tough line to straddle for most of us, but not for the quiet and composed Carnegie. “I go to work like everybody else, but then I get to go and be aggressive, run as fast as I can, hammer someone in lacrosse and score a goal in front of 10,000 fans,” he says.

Despite his churlish nature in the arena, Carnegie behaves better than the bulk of us in the rest of his life, donating what little free time he has between his two jobs to charitable work. His most noble effort so far has been forming the Mike Carnegie Burma Campaign in support of the Partners Relief and Development charity, an organization that helps refugees in Burma. Last year, Carnegie put up $10,000 of his own cash and challenged the public to match it. The campaign came close, raising $19,000, a sum encouraging enough to continue the fundraising campaign into the Roughnecks 2011/12 season.

Putting up that kind of money is a big deal for a lacrosse player, since they’re not exactly the richest professional athletes in town. “Just to put things into perspective, if you’re another athlete making millions, offering $10,000 isn’t that much, but in my situation it was a huge statement because it was half of my pay for the year,” Carnegie says.

Carnegie’s community work doesn’t stop there. Among a bevy of appearances as a professional athlete for events such as the Calgary Herald’s Raise-a-Reader campaign and the Big Brothers Big Sisters Bowl for Kids’ Sake, Carnegie and his wife, Hailey, recently committed $8,000 of their own money and two weeks vacation time to help build a secondary school in Mukono, Uganda, for 120 abandoned children.

Carnegie brought lacrosse sticks and balls with him, and spent a Friday afternoon teaching Ugandan children from age six to 12 how to play Canada’s official national game. “I left the sticks and balls there, so hopefully they’re still playing,” he says.

Despite a hectic schedule that includes working at an engineering company from nine to five, weight training 14 hours per week and sacrificing weekends to play professional lacrosse, Carnegie has managed to start a campaign to help refugees in Burma, build a secondary school in Uganda and donate his spare time to support local charities.

“As an athlete, you can get an ego and a sense of entitlement that I try not to carry. Lacrosse is important to me, but it’s not the most important thing.”