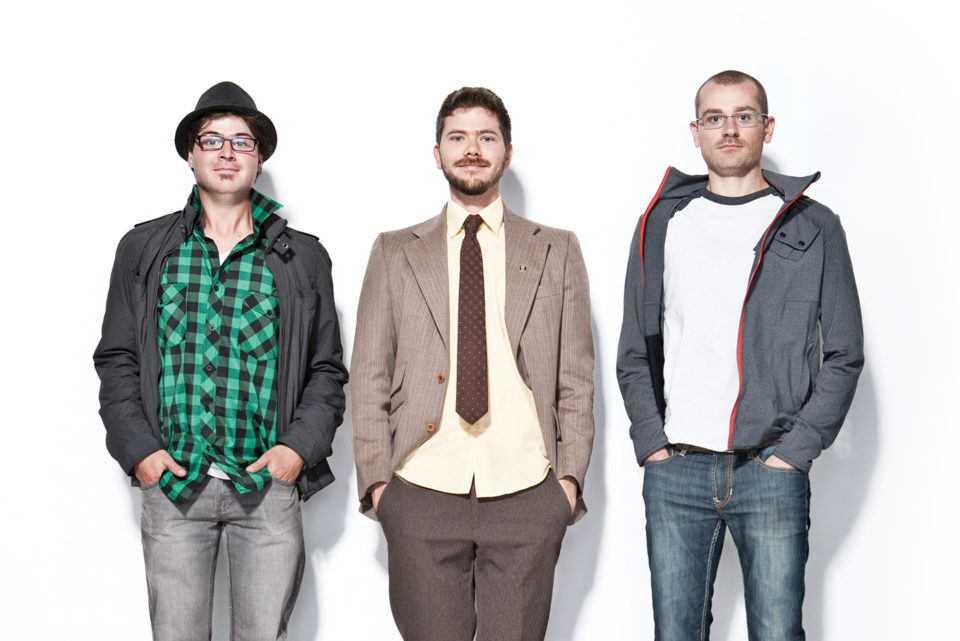 When Alberta Lieutenant-Governor Donald Ethell awarded the trio of glass-blowers known as the Bee Kingdom with the Alberta Arts Award for Emerging Artists last May, he turned to the packed auditorium and remarked from his throne-like chair:

The yellow Converse All-Stars the Bee Kingdom sported that night may have seemed out of place in a room filled with tailored suits and evening gowns, but the shoes are something of a trademark for the artistic trio of Ryan Marsh Fairweather, Philip Bandura and Tim Belliveau.

Both their colour and the “Bee Kingdom” name refers to the process of working with molten glass. “Liquid glass is a lot like honey,” Bandura explains.

The trio met at the Alberta College of Art + Design, from which they graduated in 2005. They now work out of a Mount Pleasant home that they’ve retrofitted into a glass-blowing studio, even going so far as digging up the backyard so a new gas line could be laid to fuel their furnace.
Starting a glass-blowing collective was risky. It’s not easy, after all, to sell enough glass sculptures to make a living when your gas bill alone can get as high as $1,500 a month.

“It’s kind of like having this fiery god that you have to appease,” Fairweather says.

For the first few years, the three glass-blowers didn’t make much money and admit to hitting the “occasional pit of despair” when they thought about giving up, but in 2008 they turned a corner when they were asked to design 150 centrepieces for a fundraiser put on by the world-renowned Pilchuk Glass School in the U.S. Since then, life has gotten pretty sweet.

Last year, the Bee Kingdom was asked to design a similar set of glass pieces for a black-tie fundraiser at ACAD. To date, they’ve also been commissioned to do almost a dozen custom projects, ranging from $800 to $6,000 building everything from huge vases and chandeliers to custom wall pieces. Their work is also regularly presented in some of the most prestigious galleries in the world, from Canada to South Korea, and from Seattle to Berlin. And this past spring they were awarded a prestigious emerging artist award by the Lt.-Gov of Alberta.

Why they’re the top: The trio of glass-blowers has had their work displayed in some of the most prestigious galleries in the world, from Canada to South Korea, and from Seattle to Berlin.

The key to their success: “We constantly write to-do lists,” says Belliveau. “It’s amazing what you can get done when you put pen to paper. It kind of makes you obligated to those words.”