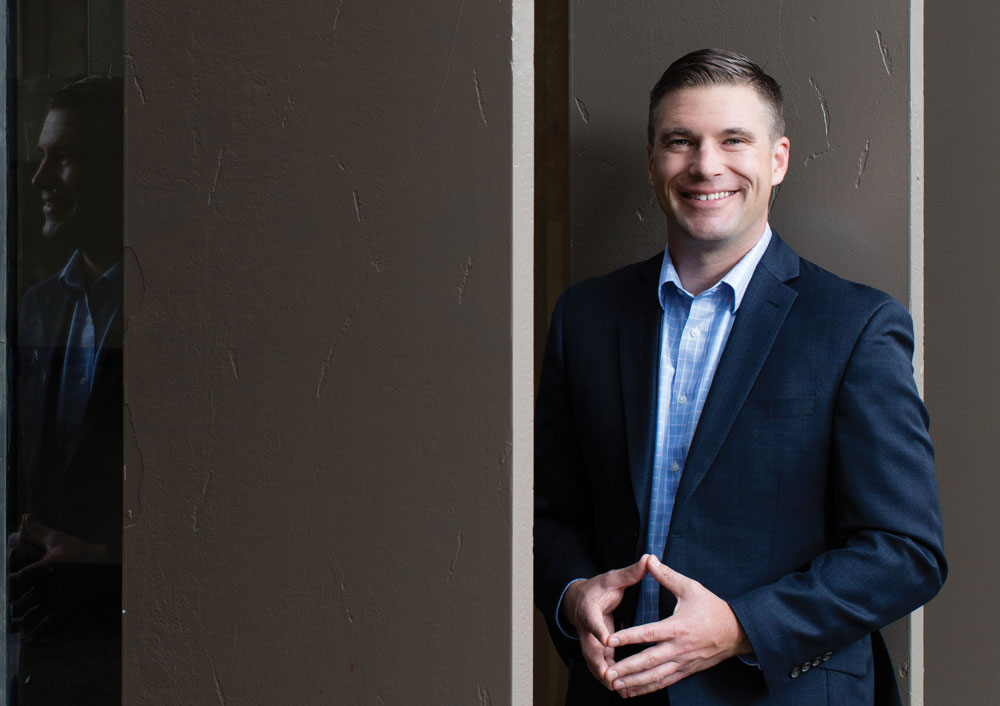 Photograph by Erin Brooke Burns. Photographed at the Taylor Institute for Teaching and Learning at the University of Calgary.

In the last nine years, Hanson has transformed Southcentre from a regional mall into one of Calgary’s top shopping destinations, all while making significant contributions to the community at large.

Some days, Shawn Hanson feels like he’s the mayor of a small town. He deals with property development, sustainable waste management, rental agreements and security, and works to build harmony among the members of his community.

But he isn’t an elected official and his community is built of retailers and customers, rather than townsfolk: Hanson is the general manager of Southcentre mall.

He has been overseeing the development and operations of the mall since 2007 – quite a significant job for someone then in his 20s, especially considering he saw Southcentre though a $130-million redevelopment from 2007 through 2009 that included the opening of Calgary’s first Crate and Barrel and Restoration Hardware stores.

“The changes have been transformational,” Hanson says. “The whole property has been stripped down – we’ve seen changes in bricks and mortar, changes in overall guest experience, the marketing has evolved, the way we integrate ourselves in the community has changed, the retail mix has greatly improved.”

The changes have had economic impact for Southcentre’s tenants – since Hanson came on, sales have increased from $335 million annually to $400 million, and, with a new Sporting Life store that opened this fall, he expects to see further growth. As the president of the Southern Alberta Shopping Centre Association (SASCA), Hanson is also playing a part in helping other malls in the province stay relevant and profitable in the face of online shopping and other market trends.

Just as important, though, is Hanson’s commitment to making Southcentre an integral part of the local community. Apart from adding several local businesses, including Analog Coffee, Cru Juice and The Bamboo Ballroom, Hanson oversees a series of philanthropic endeavours. Southcentre staff participate in programs with Run for the Cure, Autism Calgary, Inn From the Cold and other charities – in all, Hanson has helped facilitate more than $1 million in donations to the community.

“We stand for something that’s beyond just a retail experience,” Hanson says. “We’re willing to put ourselves out there and do things differently and make sure we’re a go-to community partner. And I think we’ve been pretty successful at it.” – Elizabeth Chorney-Booth