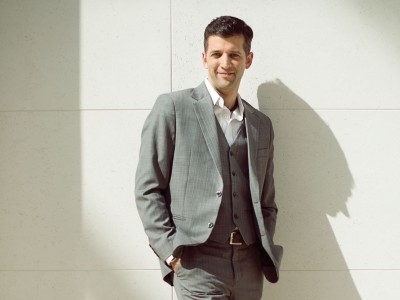 Leapfrogging from one career to the next – from pilot to personal trainer, from fitness entrepreneur to marketing executive – Chisholm understands the value of following his passion.

Originally from Montreal, Chisholm arrived in Calgary 12 years ago, at 26, to begin a career as a commercial pilot. A rough patch in the airline industry dashed his plans, leading him to explore his passion for fitness. Chisholm developed BodyPrint, a boutique training studio envisioned as a transferrable fitness system and replicable as a franchise.

BodyPrint never became a franchise, despite its immense success, in part because Chisholm became more interested in branding and marketing his business than the fitness business itself, and that led Chisholm to his next reinvention.

In 2007, Chisholm joined his designer, Chad Kroeker, to create ClearMotive, a marketing agency offering a range of advertising strategies and graphic design solutions.

“We work with the client to truly understand their business as much as we can to identify what the success points are,” says Chisholm.

He readily credits Kroeker with being the creative genius behind the images and design that make ClearMotive attractive to its clients, but ClearMotive would not have expanded as rapidly as it has without Chisholm’s talent for management and creation of business systems. As CEO, Chisholm develops new business, landing sales, meeting customers’ continuing needs, tracking workflow, accounting and financials.

Having started in a small downtown condo with one employee, the business has grown to a staff of 23, and from $1 million to $3 million in sales in two years alone.

In 2011, Profit Magazine recognized ClearMotive as one of its Hot 50 – Canada’s Top New Growth Companies, and Alberta Venture’s Fast Growth 50 followed soon after.

What sets ClearMotive apart from its competition is Chisholm’s insistence on having the discipline to focus on the clients’ growth as a result of ClearMotive’s marketing campaign.

“There’s a lot of great looking ads that don’t make the phone ring … Clients never come to us for a website or a magazine layout – they come to us to build their business,” says Chisholm.

His disciplined approach helped ClearMotive land the coveted agency-of-record for Honda Canada for all motorcycle, ATV, marine and power equipment, an unheard-of accomplishment for a small Calgary marketing agency.