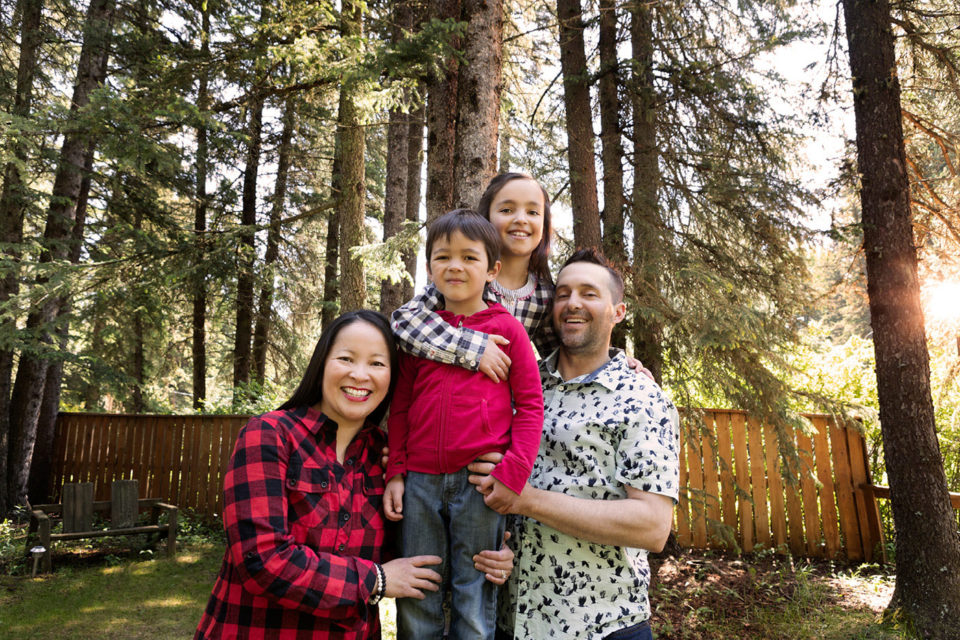 FROM LEFT TO RIGHT Writer Colleen Seto with her family, Levi Podperyhora, Annabel Podperyhora, and Jason Poderyhora. Photograph by Jager&Kokemor

The first time a stranger assumed I was my daughter’s nanny, I was taken aback, but I brushed it off as an honest mistake. Then it happened again. And again. And again. I’m Chinese and my husband is Irish-Ukrainian. Our daughter is a mix of these three ethnicities and, apparently, doesn’t look obviously Asian. The message I was getting was that when a white-looking child is with an Asian woman she must be a nanny.

This was really annoying for a lot of reasons. But even more annoying was that when I politely corrected these white folks, they were the ones who felt slighted. They thought I was the one being rude for pointing out their racist assumption, because, well, I pointed out that they make racist assumptions.

Most white people don’t want to talk about racism.

When I tell white friends and colleagues about these experiences, regardless if they respond with disbelief, horror or try to “whitesplain” it away (“they must not have really looked at your daughter”), the conversations tend to end quickly and uncomfortably.

Even my husband doesn’t want to talk about racism. He dismisses it as people being stupid or denies that racism still exists. If I ask why he doesn’t call out racism since he’s in a better position to do so than I am, he gets defensive. He thinks that he’s not racist, and therefore his job is done — he doesn’t need to engage others on the topic.

But we really need to talk about racism. All of us.

American social justice educator Robin DiAngelo coined the term “white fragility” to describe these typically defensive responses to discussing racism. DiAngelo, who is white, says white people are insulated from having to face issues of race every day like people of colour do, and so they lack the skills and knowledge to deal with it. Because of that, when the topic of racism comes up, they react badly — often by shutting down the conversation.

No one wants to admit that they hold racism in place. But by stopping us from talking about racial inequality, that’s exactly what white fragility does. It makes the social costs of pointing out discrimination so high that many people of colour simply won’t do it. We don’t want to argue with you, absolve your guilt or convince you that racism still happens, especially if you’re the one being racist.

It doesn’t help that racist barbs are often small. It’s easy to object to the bombing of a mosque or a white supremacist rally, but when the attack is subtle, it’s a lot trickier. A word here. A look there. Seemingly insignificant digs — “where are you from, originally?” “your English is really good,” “you’re Japanese? Filipino? Oh Chinese, well it’s all the same,” — are soul death by a thousand microaggressions.

You might think, “that’s not racism” because many of these slights are unintentional: the person didn’t mean to be racist. But racism is rarely a planned malicious act with the intent to “be racist.” Racism is a system where white people benefit without actually thinking about or having to do anything to take power, space and authority from people of colour. These small acts reveal an underlying, perhaps subconscious, belief that white people are the standard by which all races should be measured.

When you assume that people who don’t look white must be from a foreign place, or must not speak English, or that since you don’t know the difference between inhabitants of various Asian nations their differences don’t matter, that’s racism. You shouldn’t just not mean to be racist. You should mean to not be racist. We teach our children that if you hurt someone’s feelings, you apologize, you try to understand why they’re upset and then you try to not do it again. We don’t teach them to respond by getting offended and telling the other person they’re too sensitive, can’t take a joke or that they’re just wrong. And yet, in my experience that is what usually happens when a person of colour tries to tell a white person that their racist behaviour is hurtful. And it’s not just hurt feelings either; it’s deep-seated discrimination that forcefully diminishes many aspects of our lives.

So, please, just hear me out. Be empathetic. Listen. Like really listen with an open mind and an open heart. Have uncomfortable conversations with people of colour so that, together, we can make it more comfortable for all of us. Because my comfort matters as much as yours. And so does my worth.