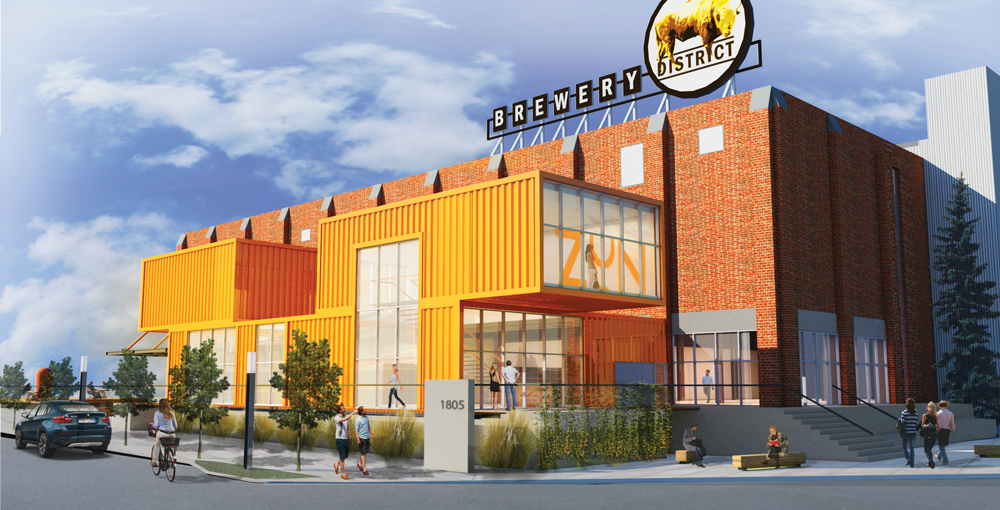 What is Happening with the Calgary Brewery

While the developer doesn’t want to do too much too soon, the plans for the redevelopment of the Calgary Brewery include ground-level retail space.

The Calgary Malting & Brewing Company in its early days.

Heading east on 9th Avenue S.E., past the busier, western section of Inglewood, drivers can spot a large bison statue peering out from the lot on the corner of 15th Street S.E. This statue, once the mascot of the Calgary Malting & Brewing Company, now stands as a reminder of one of the neighbourhood’s oldest industrial sites.

Established in 1892 by A.E. Cross, the Calgary Brewery played an integral part in shaping Calgary’s early identity. Its influence was so pronounced, the area was named Brewery Flats for a time. The brewery was one of Inglewood’s largest early employers and was one of the first in the province to introduce pension plans and insurance for its employees, as well as providing Depression-era relief work.

A small section of the lot was donated by the Cross family to the City of Calgary and became the site of Inglewood’s community swimming pool in 1963. But most of the rest of the original buildings have remained together through multiple shifts in ownership, beginning with the sale to Canadian Breweries Ltd. in 1961.

In 1984, the brewery saw its last major renovation by then-owner Carling O’Keefe. Molson Breweries took over in 1989, relaunched the signature Calgary Beer with its iconic buffalo-head label for the brewery’s centennial in 1992 and then decommissioned the site entirely two years later.

In 2009, a roof collapse incited current owner Ron Mathison, president and CEO of Matco Investments Ltd., to look into demolishing some of the structures. But the plans were put on hold when the province ordered a historic resource impact assessment. After the assessment, the project shifted from demolition to redevelopment, with many parts of the existing buildings, including the administration building, smoke stack, engine room and bottling plant, being kept and repurposed.

Rendering of a proposed redevelopment for the Calgary Brewery site.

Iain McCorkindale, president of M2i Development Corporation, an extension of Matco that is working on the redevelopment of the site, says there’s a lot of potential for a space like the brewery, but M2i is wary of trying to do too much, too soon. “The problem in Calgary is you see all these fantastical projects, they’re all glitzy and look like Las Vegas, but they generally never happen,” says McCorkindale.

M2i has partnered with the architecture firm Dialog and hopes to emulate the process used in Vancouver’s Granville Island. “What [Dialog] did [on Granville Island] was break the projects into bite-sized pieces, allowing those pieces to build and evolve on their own,” says McCorkindale.

Currently, parts of the site operate as a storage business, with an office building and a Zyn wine store outlet on site. The proposed redevelopment would see 25,000 square feet remade into ground-floor retail space, with further redevelopment on upper floors a possibility in the future.

“It’s entirely conceivable that we could do office space on Level 2 and Level 3 of this building,” says McCorkindale. “We know we can do it, but we don’t want to do it until we’ve got the retail in place and we’ve changed the entire feel of that corner.”