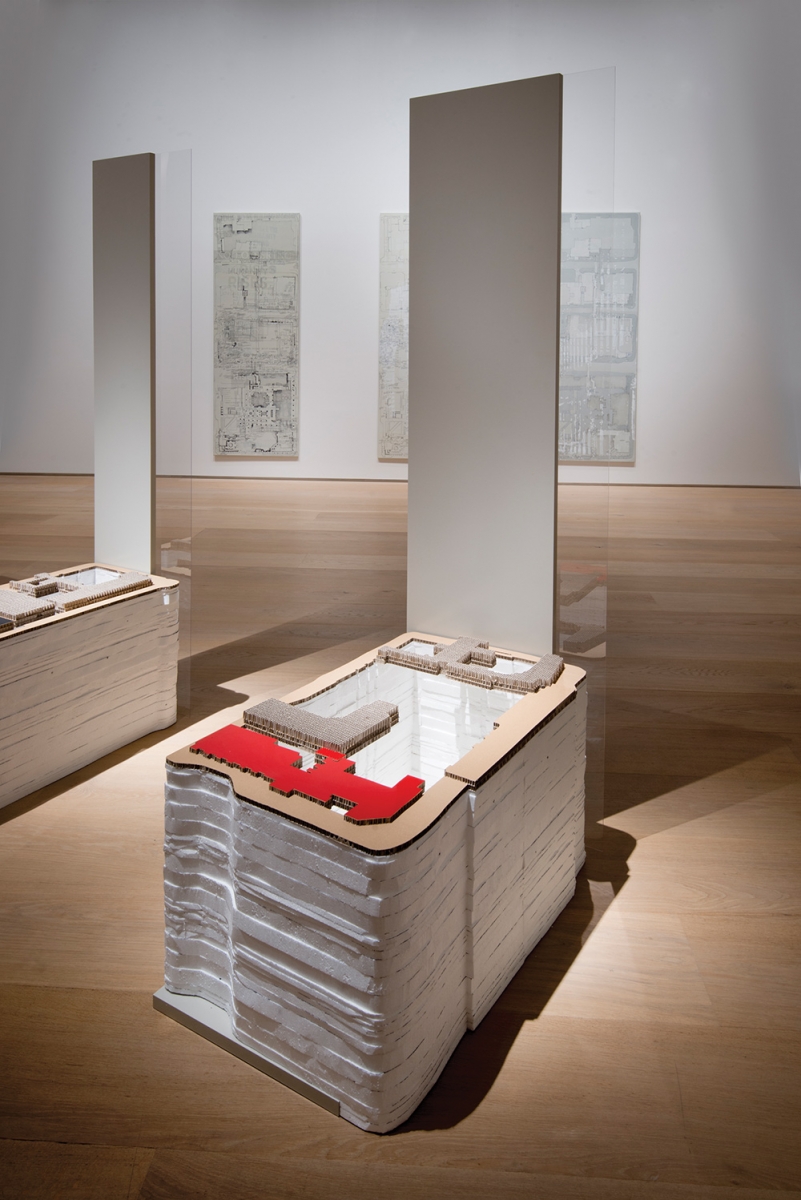 “A line is a dot that went for a walk.” This popular quote, by artist Paul Klee, who taught at the Bauhaus in Germany in the 1920s, prompts us to think about drawing in new ways. Fast forward to February 2016. Canadian born, Berlin-based artist Larissa Fassler went for walks in Calgary’s core, traced her steps, folded her experience into an installation of paintings and models, and now offers a fresh take on how artists work.

Her intensely personal, often visceral observance of the interactions of people and public space lead to a layered portrait of Calgary that speaks to our times, both gritty and strangely elegant. The raw materials of the four models – styrofoam, cardboard, tape – are clearly visible. Red, denoting civic government space, and a scrap of a neon construction safety vest punctuate the neutral colours. Each of the three paintings is structured with a hand-drawn map of four blocks. Oriented vertically, the footprint of architecture and intersection of streets echo the grid of Calgary’s modernist high-rises. One is densely embellished with detailed handwritten notes that speak to the spirit of “psychogeography”: accurate counts of people carrying coffee or on phones, descriptions of smells and snippets of overheard conversations. The lettering of signs (No Loitering) and corporate values (Honesty, Integrity, Ethics, Respect) lie beneath. The three panels evolve with increasing abstraction until the soft pencil lines, pallid grey tones of paint and over-lay of semi-transparent aqueous white suggest shadow and reflection on a glass office tower.

During her two-week stay, Fassler was struck by the “multitude of greys.” No surprise. She was here for our second warmest February on record with only a trace of snow, several fog advisories and a forecast of continued economic slump, job loss and vacant office space.

Larissa Fassler, born in Vancouver in 1975, is a graduate of Capilano College (1996) Concordia University (1999) and Goldsmiths in London (2003). She lives and works in Berlin and is attracting increasing international attention. Her piece is on display until Dec. 18, 2016 at the Esker Foundation.