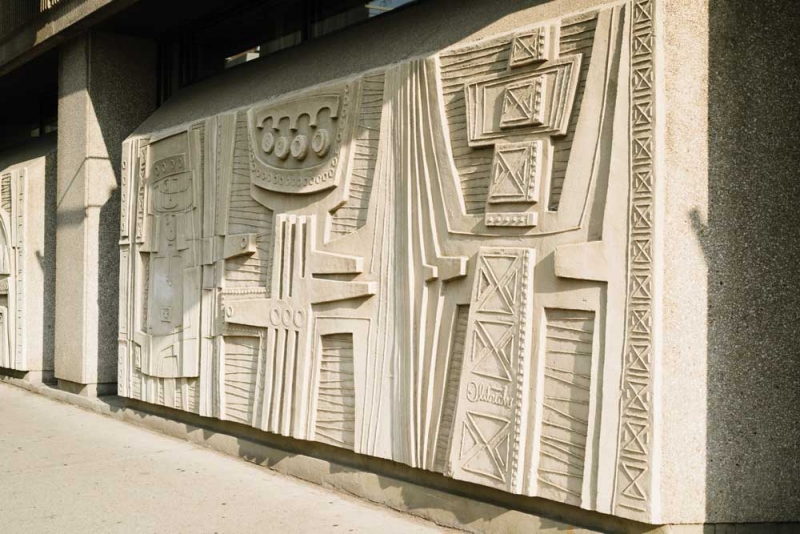 Photograph by Jared Such

The concrete murals outside the Glenbow are a key site in the city’s brutalist past. Sharply slanted edges of three protruding bunkers suggest massive walls; deeply recessed windows mimic arrow slits. Together, they form a structure that suggests a castle. Each section is capped with a low relief panel six inches in depth. Within that shallow space, planes project and recede, catching light and casting shadows. The circle on the left stands out furthest from its background; the sharp contrast makes it the brightest spot in the mural. This representation of the sun testifies to the skilful craftsmanship of the artist. It also demonstrates wit – he positions the heroically proportioned cowboy so you can walk right up and look him in the eye. The overall surface has the texture of fine sand, the residue of a technically demanding process of casting concrete in wet sand moulds. The graphic design suggests a story of Calgary, augmented with thin raised lines that provide details, such as a belt buckle, patterns of fields or water and the artist’s signature.

The artist, Robert Oldrich, is a pioneer of public art in Calgary. Born in 1920 in Osrtava, a city in the Moravian-Silesian region of what was then Czechoslovakia (now Czech Republic), he received his artistic training through apprenticeship. He would go on to escape communist Czechoslovakia, arriving in Canada in 1951. Seven years later, he settled in Calgary where he taught at the Alberta College of Art (now Alberta College of Art + Design) for four years and initiated a successful business for architectural commissions.

Oldrich brought an understanding of European Bauhaus design principles that were key to the brutalist architectural style that was gaining ground in Canada. Intending to herald a new post-war era that stood for technological innovation, economy of resources and honest use of materials, brutalism reacted to the glass-and-steel buildings of the early 20th century with the bold use of raw, unfinished concrete.

Oldrich’s abstract style and design philosophy found a good fit in his adopted home. “Canada is a rough, crude country with lots of sun and sky and wind,” he wrote. “Our sculpture and our architecture should take advantage of these conditions. Things should be three-dimensional, cast lots of shadows, have windscreens to break up the flow of air, provide surfaces for the snow to sit on and drift against.”

Oldrich preferred not to title his work, hoping people would respond to the work rather than the title. Recently, however, a Glenbow researcher located his annotated drawings (above) that show the three panels were intended to represent Calgary’s past, present and future. The murals accomplish what is required of many works of public art in Calgary today: refer to the history and aspirations of our locale, engage the public and indicate what goes on
inside the building. Oldrich’s 1975 vision for the future is in the enigmatic third panel – people engaging with a variety of arts, including visiting museums. Has his idea of the future become our present?