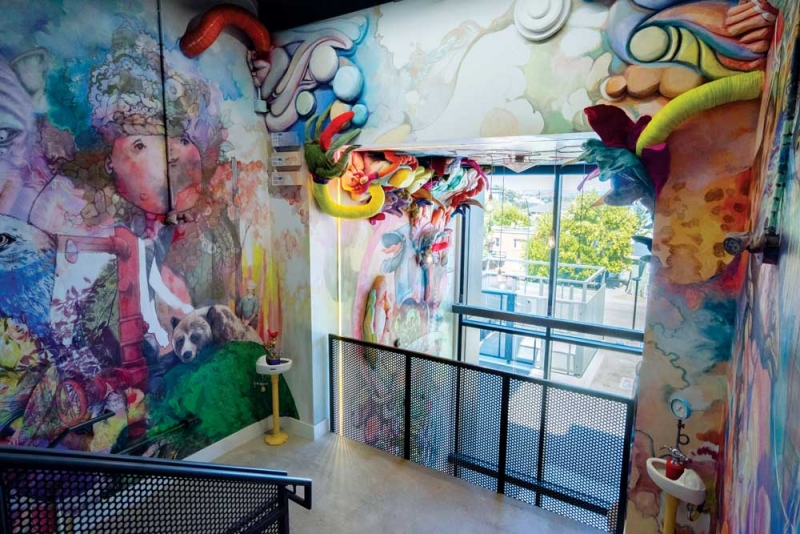 Title: Imaginarium, 2017
Artist: Katie Green and Daniel J. Kirk
Media: Acrylic on digital print (paper), acrylic on polystyrene and plaster, wire mesh, fabric, aluminium tubing, light bulbs and reclaimed material from King Edward School.
Size: Four-storey stairwell installation with eight sections of varying sizes.
Location: cSPACE King Edward, 1721 29 Ave. S.W.
Notes: This public art project was awarded to Katie Green and daniel j. kirk based on a competition organized in 2016 by cSPACE King Edward with the support of The Alberta Foundation for the Arts and The City of Calgary‘s Public Art Policy.  Two other murals by Katie Green and Daniel J. Kirk can be seen at the Bowness Public Library and in the department of art entrance on the sixth floor of the Art Parkade at the University of Calgary.

Enter the northeast stairwell of cSPACE, Calgary’s new community arts hub, and you enter a giant illustrated pop-up fantasy as a series of worlds unfold along the stairs and landings. Birds and fish, mammals and monsters appear within expressive lines and soft layers of colour. Creatures and plants blend, braid, tangle and morph. Eyes and hands protrude. Each casts its own spell: a child’s early drawings, a snippet of sci-fi, an ecosystem in flux, a snatch of nightmare, a flourish in the sky.

Creators Katie Green and Daniel J. Kirk are frequent collaborators. At the outset of this project, they invited students at Maria Montessori Education Centre, one of the tenants of cSPACE, to “imagination workshops” where they invented and illustrated words such as “mermicorn,” “plob” and “ptor.” Green and kirk were intrigued with how people develop visual language through the flow of the conscious and unconscious. Their interpretation of the mind’s eye took hold as they developed master drawings, mixing workshop material with their own.

Both BFA graduates from the University of Calgary, Green and Kirk each bring strengths to this project from their individual practices. Green has a light touch with drawing and watercolour and an interest in masks, puppetry and fabric, while kirk enlists storytelling, visual language and community engagement to realize large painting projects and constructions. Both admire Spanish muralist Aryz and Polish duo Etam Cru, but here they wanted to bring illusion into three-dimensions. With iPads as sketchbooks they created digital drawings printed on 20-pound paper. After adhering the drawings to the walls, they added sculptural elements as outgrowths. According to kirk, Imaginarium is “a visual dreamscape that is loaded with layers of playful, whimsical images, so that people who use the stairwell daily or visitors who come again and again can see different things.”