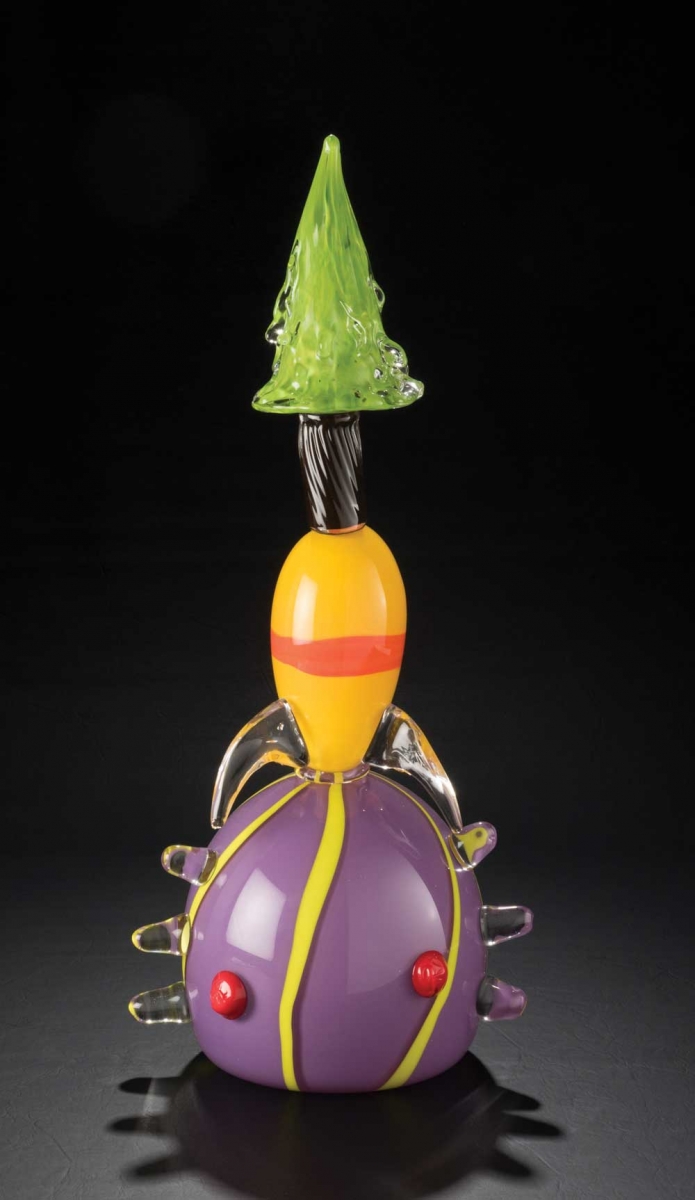 Photograph courtesy of the City of Calgary

Bright and colourful, this perky glass sculpture from the City of Calgary‘s public art collection is installed in the Calgary Foundation‘s light-filled reception area. Three elements are stacked: a head-like base, a central rocket-bomb and a spruce tree. The forms are fluid – even a little wonky – revealing the enjoyment the artists take in working with molten glass and their particular, playful aesthetic.

“We are the Nintendo of glass,” says Ryan Fairweather of Bee Kingdom, the artist collective that created the sculpture.

Fairweather, along with Bee Kingdom co-founders Phillip Bandura and Tim Belliveau, each contributed elements drawn from their individual interests as artists and storytellers. Fairweather’s mythological “Jooba” characters are cute, post-apocalyptic robots that clean up our mess. Bandura’s repurposed bombs disseminate goodness in the world, while Belliveau’s concern for the environment finds form in sculpture. Their method of joining disparate bits is akin to the collaborative drawing game, cadavres exquis, popular with surrealist artists. The result was an unexpected concoction: could the Jooba’s bombshell idea be to plant trees?

Bee Kingdom burst onto the scene after the founders graduated from the Alberta College of Art + Design in 2005 with fresh ideas about art and collaboration. The Studio Glass Movement, especially Dale Chihuly’s exuberant projects, had brought artistic glass workshops into the spotlight in North America. (Calgarians can enjoy Chihuly’s Chandeliers in the Winter Garden of Jamieson Place, an office tower just south of Eau Claire). Bee Kingdom was feted with the Lieutenant Governor’s award for emerging artists and the trio were part of Avenue‘s Top 40 Under 40 class of 2010 (they were featured on the cover).

In recent years, Bee Kingdom has exhibited in Berlin, Germany and at the Pictoplasma Festival in Monterrey, Mexico, as well as locally at the Glenbow museum. They offer open houses, demonstrations and classes at their Mount Pleasant studio and have a series of glass-blowing “ride-along” videos on YouTube. With the support of the Beakerhead Festival, they have also extended their imaginative reach into inflatables.