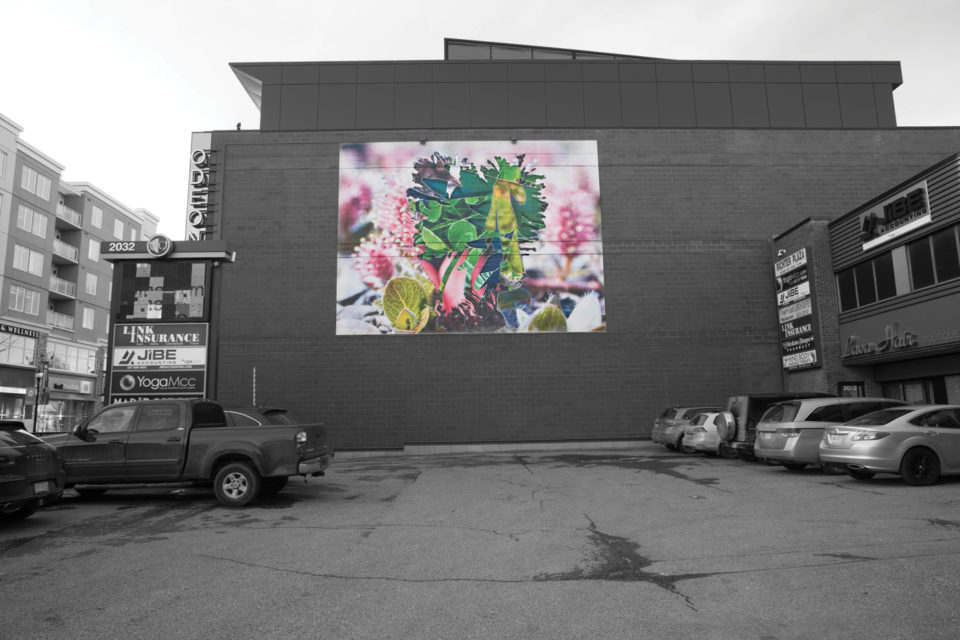 Title: Absentia — Newfoundland and Labrador #6, 2017.
Artist: Jennifer Wanner.
Medium: Digital output on alumigraphic panels. Technical assistance from Resolve Photo and Anvy Digital.
Size: 26 feet by 34 feet.
Location: The Odeon Building, 3332 20 St. S.W.
Note: Absentia was commissioned through Paul Kuhn Gallery for Ronmor Developers. Collages by Wanner can also be seen at YW Hub in Inglewood on loan from the Collection of the Alberta Foundation for the Arts and her animations will be featured in the String Theory Music Collective performance on March 1. Wanner is represented by Paul Kuhn Gallery.

Vinyl graphics are familiar in marketing and interior design, but watch for the impact when the medium is used by artists such as Jennifer Wanner, who opens up a portal into a magical space of disappearing plant life with the giant vinyl Absentia — Newfoundland and Labrador #6.

The ground-hugging branchlets of ovoid, slightly curled, waxy leaves and pink catkins will be familiar to botanists as Barrens willow. The only place in the world this species grows is on the harsh, limestone barrens of the Great Northern Peninsula of Newfoundland. Subject to wind and water, a Barrens willow can live for a hundred years. Now, it’s threatened by floods and human activity, including road building, quarrying and even walking. Its status is endangered.

Wanner embeds environmental warnings in disarmingly beautiful floral-themed artwork, including watercolour collages, photography and animation. Prior to Absentia, she hadn’t worked at the scale of a mural before, and it tickled her taste for twisted humour to make one of the tiniest plants on Canada’s endangered species list the size of Godzilla. On the east-facing wall of The Odeon building in Marda Loop, it’s safe from wind and weather and can’t be crushed by footsteps.

The cut-out shape is in sharp focus at the centre. Judging from the detailed edges, the missing section depicted catkins in the foreground of the photograph. Within the outline, more layers are evident, one peeping through the opening of the next. Shapes and colours become abstract, but the shadows that play across the layers confirm that this is a photograph of a stack of photographs, each with excised areas.

Coinciding with Canada 150, Wanner created a series of cross-country botanical hybrids. She joined images of roots, leaves, flowers and seed pods from endangered species to compose a single surreal life form for each province and territory and one for the country. (Visitors to Glenbow may remember seeing them in the exhibition Second Nature three years ago.) Now, some are in the collection of the Alberta Foundation for the Arts.

A 21st century virtual plant hunter, Wanner collected hundreds of plant images from the Internet, printed them on paper and meticulously cut them for the collages. Committed to reuse and repurpose, she kept the leftover surrounds. The stacks of surrounds became the ingredients for her recent series of large photographs, one of which was enlarged for this mural. In super-size, the image brings refreshing colour and the promise of spring to a part of town that is changing quickly. It also brings a thoughtful note, reminding us to tread carefully.