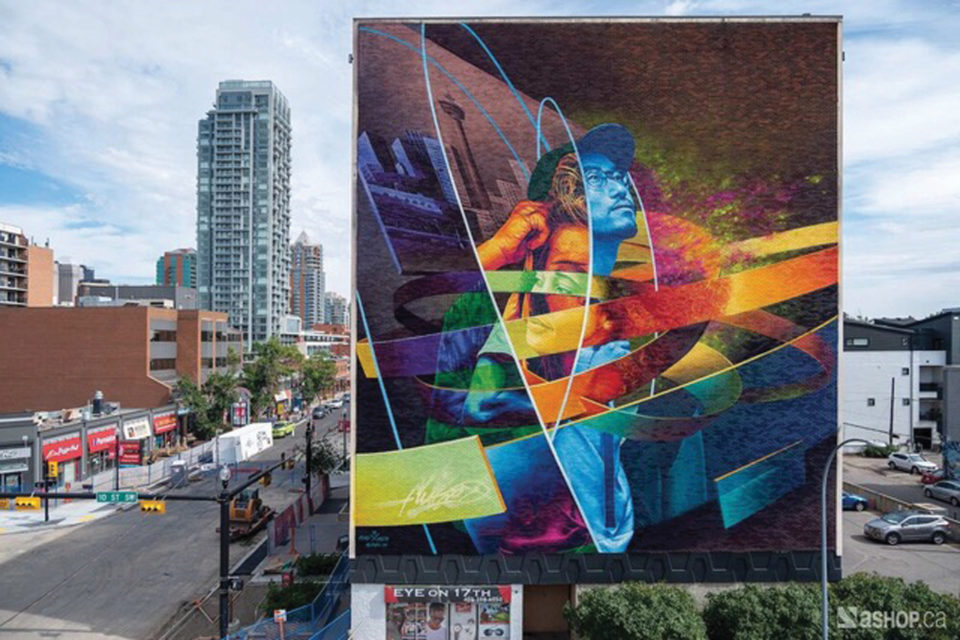 Fragments of diverse young faces intermingle in a column of light within swirling ribbons of colour in this eight-storey-high street mural. They coalesce into a radiant triple portrait with a message for our times. Akin is a refreshing work of urban art with an intelligent dose of spatial complexity and social engagement, wrapped up with remarkable craftsmanship.

Consider each figure’s gaze and gesture to unravel how Montreal artist, Fluke, cleverly unifies them as a composite character and a metaphor for interconnection. The blue backpacker looks up. The central woman faces you head-on as she reaches for her hoodie. The woman in green glances sideways. Their combined perspectives fuse the past, present and future. Spatial relationships shift. Your eye makes connections that join the characters. A ribbon’s edge suggests an eyebrow; the hand that tugs the hoodie might belong to either of the women; the blue fellow’s hand could be one of their shoulders; the nebula behind the green woman doubles as her flowing Afro.

Born to Polish immigrants in Montreal, Fluke’s first language was neither English nor French. When teens introduced him to graffiti at age 9, he quickly grasped the power to communicate across cultures visually. He’s the kind of artist who learns by observing and doing — and thinking. He saw the potential of building a fair and honest business, and founded Ashop Productions, a custom street-art workshop and artist-representation agency for urban artists that has earned international acclaim during the last decade. Fluke slowed his own artistic production down as he put energy into the business but powered up his game in 2017 when he created a tribute mural for his friend, the late hip-hop musician Paul Frappier, a.k.a. Bad News Brown.

Fluke’s imagery and techniques have roots in graffiti, but his approach is about community building. In the nineties, he learned to manage colour when the range of paints in the local hardware store was limited to five basic colours. Now, he optimizes monochrome to achieve photographic effects. Spray-painting freehand one compartment at a time with a section of the pre-planned design in hand, Fluke achieved meticulous detail and tonal consistency while harnessed on a mechanical lift that took him 85 feet in the air. With the support of the crew who accompanied him, Five8 and Fléo, he accomplished the colossal mural in 15 days.

There’s a long line of art — from spray-painted stencilled hands in prehistoric caves to contemporary graffiti — that carries two essential messages: “I am here,” and “The moment is now.” In this mural, Fluke adds, “We are in this together.”