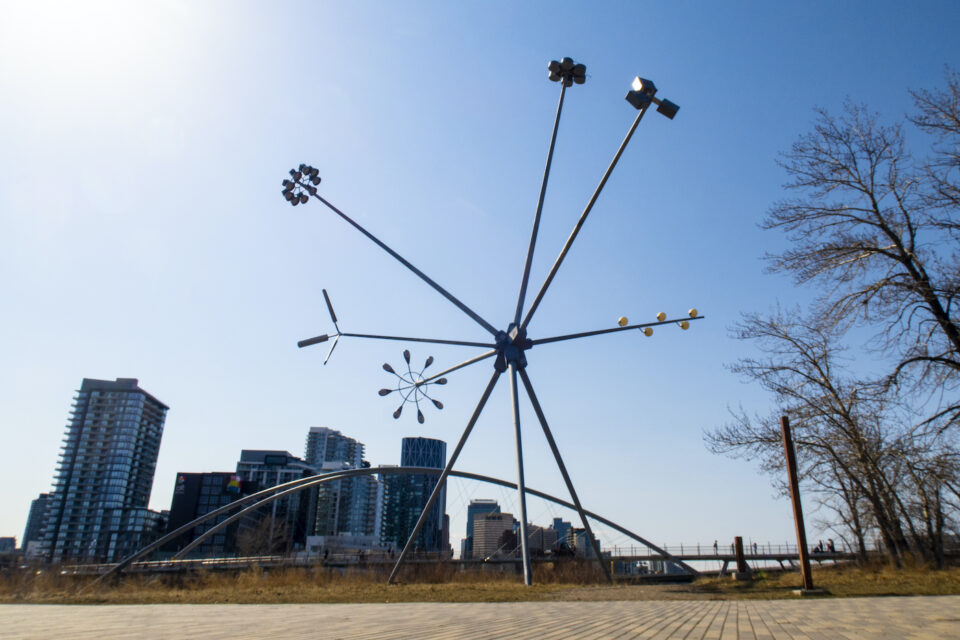 By day, a metallic flower; by night, a low-hanging constellation; from late April to fall, an inner-city penthouse platform for a nesting osprey. In each guise, Bloom is full of paradoxes. Artist Michel de Broin created the sculpture as a commission for the Calgary Municipal Land Corporation (CMLC) seven years ago, and it now draws admirers to East Village and the award-winning St. Patrick’s Island, rejuvenated after the flood of 2013.

In April 2015, Montreal-based de Broin made an appearance at the Grand as the surprise guest for the first Placemakers Event of the East Village CMLC Speakers Series. He spoke of his admiration for Alexander Calder’s Expo 67 legacy sculpture Trois Disques, and how various features of it had inspired his concept for Bloom. Calder used grand scale to mark a place that could be seen from many viewpoints, but also allowed people to circulate and pass under the sculpture with ease by elevating it on slender legs. Likewise, Bloom is monumental, but also accessible. It touches the earth in three spots with slender poles, inviting visitors to marvel at it from below, while also being respectful of the ecology of the island.

A highly regarded artist with an impressive record of innovative, cross-disciplinary projects in Germany, France, the U.S. and Canada, de Broin came to national attention as the 2007 winner of the prestigious Sobey Art Award for emerging contemporary artists. Five years later, the National Gallery of Canada permanently installed his remarkable sculpture, Majestic, on its grounds near Parliament Hill. Originally exhibited in New Orleans, Majestic is constructed from streetlamps damaged during the devastation of Hurricane Katrina. A tribute to the resilience of those who rebuilt their lives after adversity, it’s an astonishing blend of asymmetry and balance.

Bloom simulates a globe-shaped flower with repurposed industrial street lights that emanate from a central hub, suggesting the delicate floral filaments of an allium or dandelion puff. The sculpture vacillates between function and representation in an irrational, magical way. Each of the six shafts terminate with a different fixture that doubles as a distinct flower form. Engineered to function as lights, they illuminate the park at night and from a distance create the illusion of a sparkling ball.

The resident osprey, a species known to be tolerant of human activity, picked the six-petaled circular florette that shines down from seven storeys high as a perennial nesting perch. Its arrival each year is a testament to the success of the park in attracting wildlife and adds to the transformation of the sculpture. The ready-made industrial components mimic natural structure, are repurposed as an object that is both functional and aesthetically pleasing, and are reclaimed by nature. “It’s beautiful to see a bird taking my sculpture as a nest,” de Broin said in a 2016 interview with the CBC. “It’s great to be appreciated. Especially by animals.”