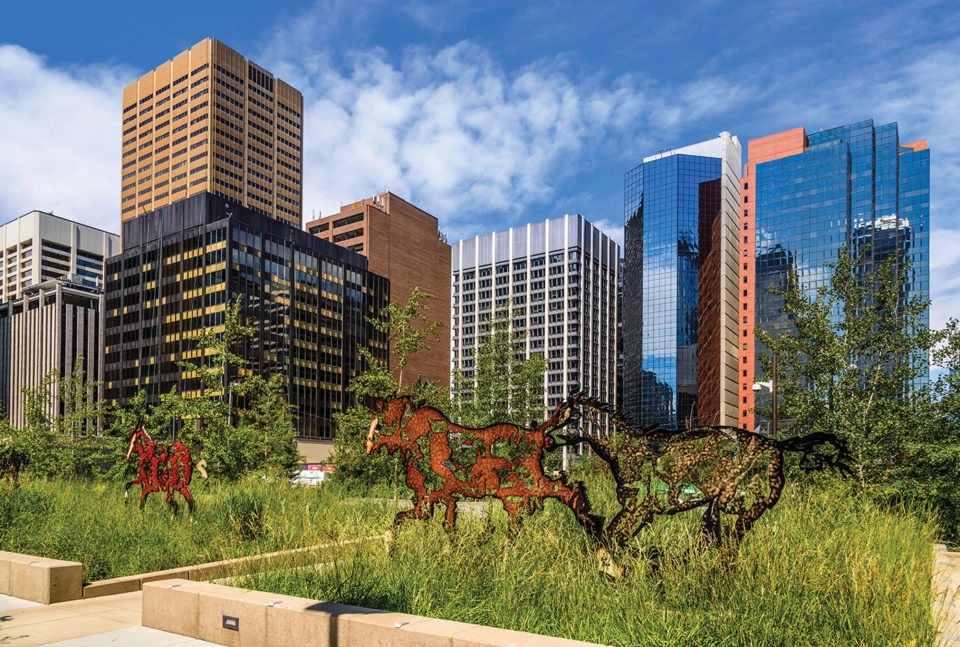 Title: Do, Re, Mi, Fa, Sol, La, Si, Do, 2010.
Artist: Joe Fafard (1942 to 2019).
Media: Powder-coated 5/8-inch-cut steel plate.
Location: Harley Hotchkiss Garden, 611 4 St. S.W.
Notes: This work was commissioned by the Calgary Stampede through the Calgary Stampede Public Art Committee with the support of PennWest Energy, Siebens family of Calgary and the City of Calgary. Other local exterior Fafard sculptures include Pacific Paskwamostos, a laser-cut bison installed in 1996 at 630 3 Ave. S.W., and Van Gogh Observes, a multi-coloured bronze, installed in 2019 outside Masters Gallery at 2115 4 St. S.W.

Eight colourful steel horses cavort across downtown’s Harley Hotchkiss Park, a familiar Calgary landmark along the CTrain line. Altogether they form a spirited sculptural herd, though you are in for a treat if you single them out for viewing.

The late artist Joe Fafard designed each equine as an amalgamation of snippets that form the convincing shape of a larger-than-life horse on the move. Discovering shapes in the cut-out openings, the solid sections of filigree and even the silhouetted edges is a brain tease, revealing cats, foxes, birds, people and stars. (A closer look reveals further shapeshifting as a tail transforms into a vice grip, another a small swoosh of a horse).

Fafard’s Do, Re, Mi, Fa, Sol, La, Si, Do* was produced at a foundry in Pense, Sask. He used laser-cut steel off-cuts saved from his previous works and repurposed them into the ingenious horse compositions. He would continue to recycle over the course of his career.

Fafard enjoyed experimenting with materials and developing new processes. Another innovation he brought to Do, Re, Mi, Fa, Sol, La, Si, Do was his work with powder coating to achieve rich colours and painterly visual textures. With a base layer of white baked onto the steel plate, he worked into the next layer of sprayed-on colour to remove powder, often with a brush or a stick, to expose some of the white before baking the new colour in place. In this way, Fafard built up multiple layers of colour.

Exploring details within each individual horse, one imagines moments in Canadian life since the first shipload of horses arrived as a gift from the royal stables of King Louis XIV to his subjects in New France in 1655. The versatile breed would pull carts and sleighs, race, carry soldiers into war, become an official symbol of Canada and eventually Fafard’s inspiration.

The Calgary Stampede commissioned Fafard to make a pair of identical sculptures, one as a gift to Quebec City in celebration of its 400th anniversary, the other for Calgary in recognition of the sister city relationship.

“When I was asked to create a sculpture that would reside in both Quebec City and Calgary, I immediately knew the story I wanted to tell: the story of commonality across this great country,” Fafard said at the time of the official opening in Quebec City. “I have used the Canadian horse as a metaphor to represent sound — a song — a sense of harmony. I added a symphony of colours and then knew it was done.”

* Fans of The Sound of Music should be aware that the spelling of the seventh horse is as Fafard intended and is not a misspelling of, as sung by Julie Andrews: “a drink with jam and bread.”

This article appears in the June 2020 issue of Avenue Calgary.