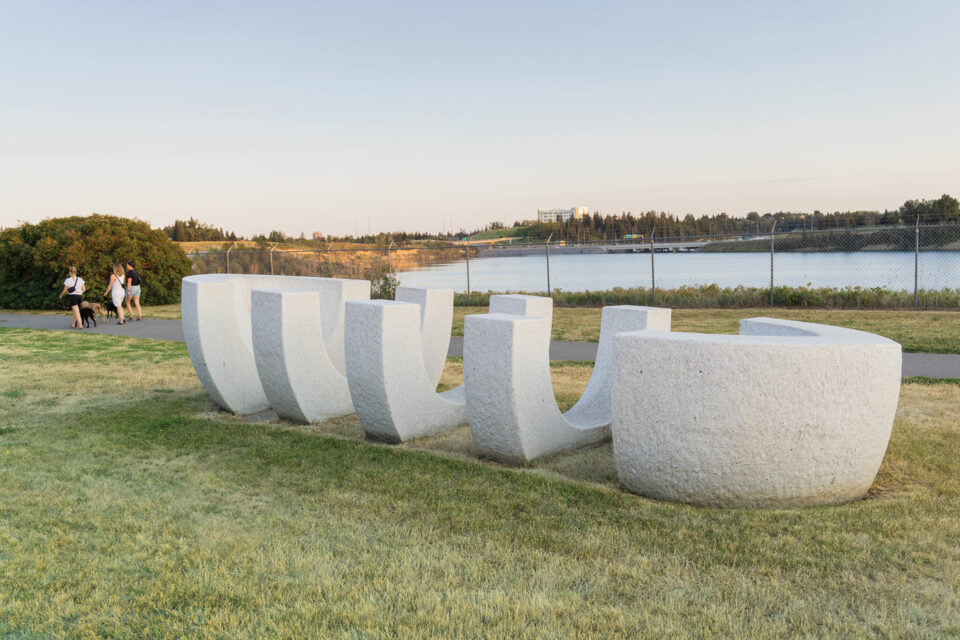 On a patch of grass overlooking the Glenmore Reservoir is a beached boat form built of white stone. Duration was created from five great blocks of prized Bethel granite and will likely be the most enduring sculpture by Peter von Tiesenhausen.

The artist, who is based in Demmit, Alta., has explored the boat form throughout his career. This exploration included the creation of ice boats during the winters of the late 1990s. After outlining an almond-shaped hull of a boat on a frozen pond, he scraped the interior every few days. The thin ice thickened and, after a month, the hull’s wall was 10 inches thick and extended down almost three feet, strong enough to support his family.

When he cut the boat free with an ice harvesting saw, it bobbed up and rocked side to side. When the City of Calgary called for public art to celebrate the 100th anniversary of its Waterworks in 2000, von Tiesenhausen’s submission — a quick charcoal sketch inspired by the ice boats and their thick walls — made the cut. To convey the relationship between humans and water, he sought out the strongest stone on the continent. The rough blocks of fine-grained Vermont granite were cut and finished by the late master carver Robert Sindorf, giving Duration its inviting surface and soft matte sheen. Sindorf also inscribed the bottom with a secret message that von Tiesenhausen gave him, now hidden on the underside.

Although von Tiesenhausen’s career has taken him to museums and galleries across the country and abroad, he is a familiar artist to Calgarians. He studied at Alberta College of Art + Design (now Alberta University of the Arts) and has mounted major exhibitions at the Illingworth Kerr Gallery, Glenbow and Esker Foundation. He also created three projects through Watershed+, the innovative program shepherded by the artist collaborative Sans façon with the support of Paul Fesko, former manager, Utilities and Environmental Protection.

Peter von Tiesenhausen also played a key role in Passages, a celebration of the Bow River in 2010, during which 100 people released small, charred boats from a bridge in Douglasbank Park. Von Tiesenhausen had carved a low relief figure in each boat. From above, they resembled early Christian images of figures within mandorla, the halo around the body of the Blessed One. On the boat bottoms, he branded a digital return address. When the Saddleridge reservoir was emptied for maintenance for the first time in 40 years, von Tiesenhausen, as cinematographer, collaborated with filmmaker Dave McGregor and sound artists Magnus Tiesenhausen and Jen Reimer on the 14-minute film, Reservoir. His most recent and least visible project with The City of Calgary Water Services, Meander, is a 100-metre-long living wall along the Elbow River designed to help with bank stabilization, while providing habitat for native flora and fauna.

Duration is an elegantly simple, minimal abstract sculpture. The slight angle upwards toward the east and the subtle tilt to starboard invoke the moment his ice boat floated upward from its source, rocking gently.