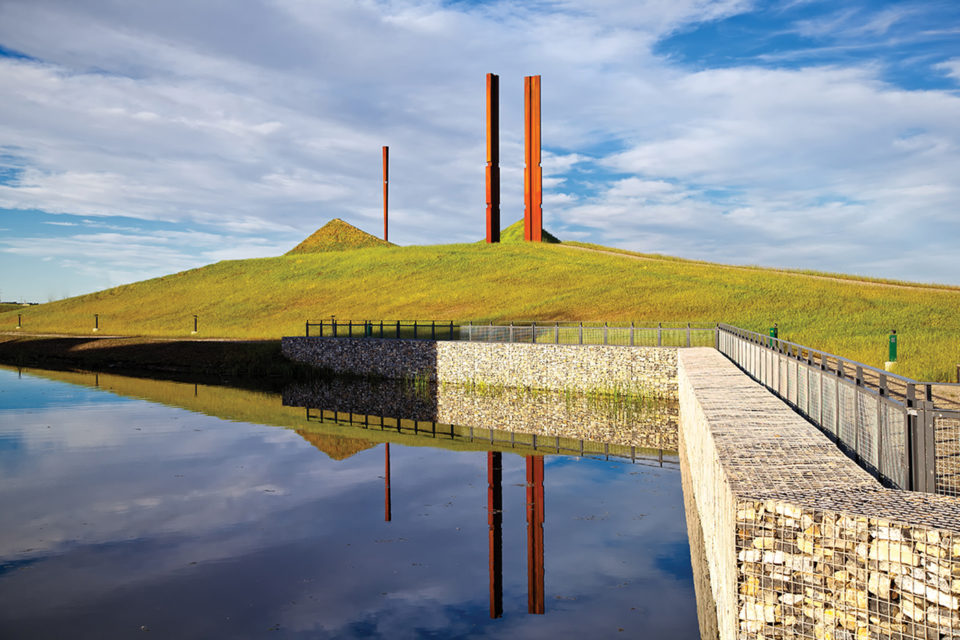 Photograph courtesy of the City of Calgary

If you haven’t been to Ralph Klein Park to see Hawk Hill Calgary Sentinels by the late American sculptor and environmental artist Beverly Pepper, who died earlier this year at age 97, it’s definitely worth a trip, if not several. The park is a constructed wetland that incorporates a community environmental education centre and Pepper’s grand artwork. On her first visit to the site, the Brooklyn-born artist was impressed by hawks circling overhead. In response, she created a remarkable monument: a flat-topped constructed hill sculpted with two wing-shaped earthen berms and three upright steel structures standing guard (hence the title), completed in 2013.

The recent opening of the Beverly Pepper Sculpture Park in the artist’s adopted hometown of Todi, Italy, has brought renewed attention to her six-decade-spanning career. Prior to breaking out as an artist, Pepper authored cookbooks in the 1950s to support her family. In the 1960s, she was credited as one of the first sculptors to use Corten steel, and is renowned as an early proponent of land art. Making abstract sculpture in the era of modernism, Pepper broke the rules. She chose outdoor settings where her work would be available to all and wove a sense of time and place into the totality of each project.

Hawk Hill Calgary Sentinels is an artform that Pepper calls “earthbound.” The constructed landform is an integral physical component of the art, as are the grasses. The seasonal cycles, weather changes and shifting light modulate the site, making each visit a singular experience. During winter, the geometry of the hill and the austerity of the shafts pair in a striking way with the minimalist prairie landscape of snow, ice and sky. In spring, the velvety russet surfaces of the weathering steel stand out against the fresh green of the emerging grasses. The structures project a powerful permanence as the earth begins to teem with life and the air fills with the sounds of returning birds.

Circle around the education centre to ascend the wide path that leads to the matched set of vertical towers, which mark the entrance to the elevated plateau with a bird’s-eye view of the wetlands below. The centre of the mesa is protected from wind by triangular landforms that flank the path. In spring and fall, teachers bring children to this sheltered spot to journal, meditate and reflect. When the wind blows at the end of the path, the third sentinel produces mysterious harmonic sounds. Needle-like in form, it pinpoints the spot for a panoramic view of the prairies, city centre and mountains.

The viewing platform recalls the historical garden feature known as a mount. English landed gentry built artificial hills, often topped with a pleasure palace or a temple, from which to survey their vast holdings. Hawk Hill Calgary Sentinels proposes a radical reframing in tune with the spirit of the park. Pepper’s mount offers experience on shared land and a meditation on stewardship, rather than ownership.

This article appears in the April 2020 issue of Avenue Calgary.