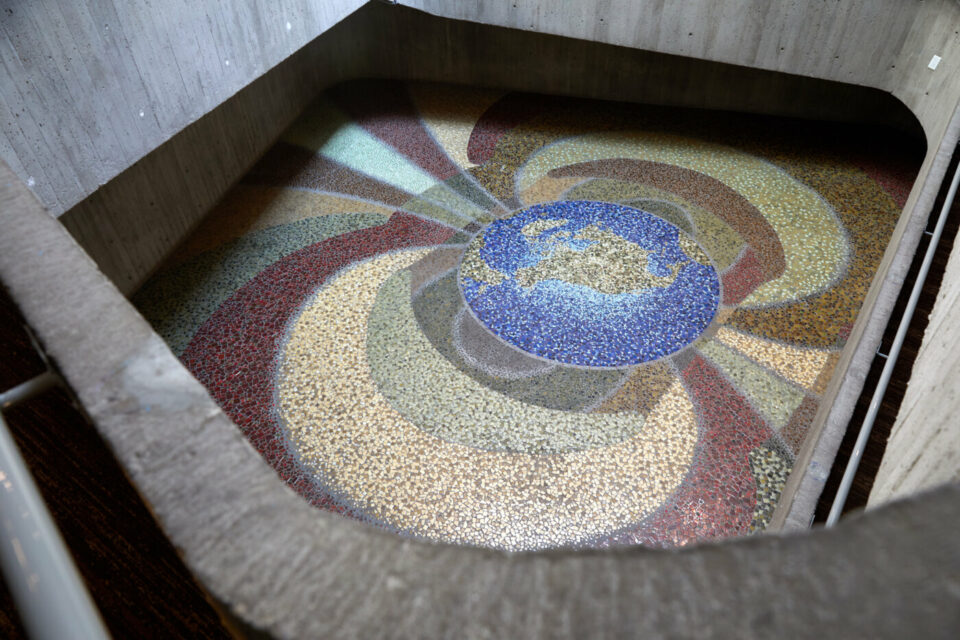 Crescents of soft, natural colour circulate around a bright blue Earth in subtly shimmering tile. Designed and created by Helena Hadala to be the base of Foucault’s pendulum at the Centennial Planetarium, the mosaic now has a second life as a floor installation within the raw concrete architecture of Contemporary Calgary, the public art gallery that took over the planetarium building in 2018.

In 1975, when she became the planetarium’s resident artist, Hadala was a recent graduate of the University of Calgary art department, where she had studied with outstanding artists like Ron Spickett, Harry Kiyooka, John Will and Noboru Sawai. Her first task was to paint murals of galaxies.

After breaking for an art tour across Europe, Hadala returned to her second assignment. The planetarium was planning a display of Foucault’s pendulum — a device to demonstrate the Earth’s rotation on its axis — which required a calibrated floor to mark time. Based on Calgary’s latitude, a chromed steel bob would complete a cycle every 36 hours. Hadala placed 72 small red tiles around the circumference of the globe with Calgary at the central pivot point to indicate the passage of each half hour and confirm to visitors that we live on a planet rotating in space. Surrounding the Earth, she visualized a cross-section view of Van Allen belts, the doughnut-shaped bands of energized particles that ring and protect our atmosphere.

Inspired by the organic ceramic mosaics of Catalan architect Antoni Gaudí, she chose mosaic for the floor, despite the fact that the medium was new to her. After scouring bathroom and kitchen tile showrooms across town for square tiles in popular 1970s earthy tones (ruby-red, rusts, browns, harvest gold, avocado-green, lime, sandy-beige and off-white), she smashed them in a bag with a hammer to make irregular shapes.

Placement of the tiles took a year and a half, with Hadala moving out from the centre on her hands and knees. She signed off with “H. HADALA” along the outside wall. For the finishing touch, she defined the tiles and integrated the tones of colours with grey grout.

Hadala is now a revered senior artist who continues to make beautiful work. This early mosaic is a fascinating prelude to the paintings, drawings and prints for which she is well-known: abstract compositions that suggest fields of gentle energy, tinged with ethereal soft colours.