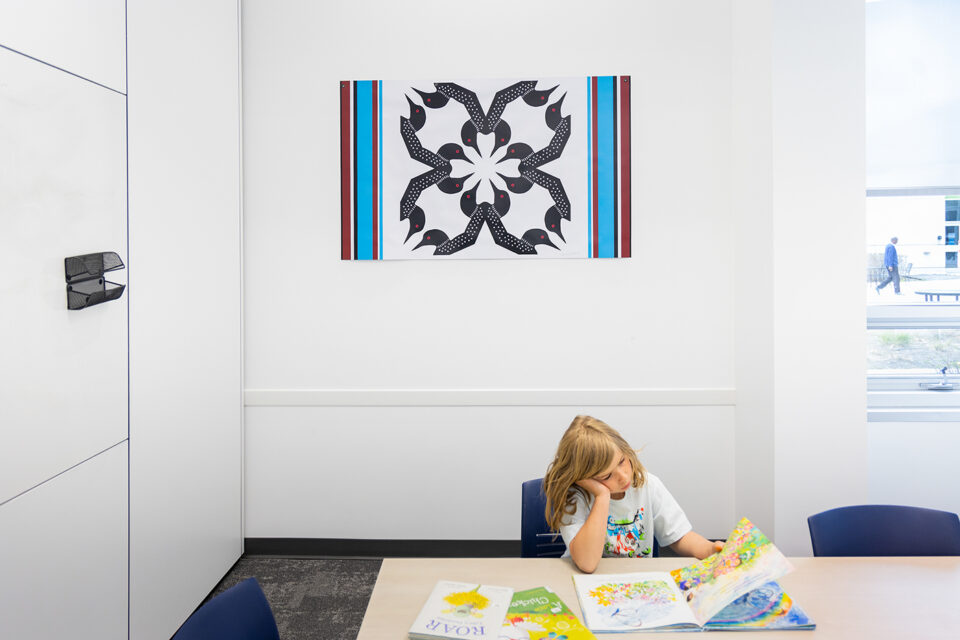 With si’káániksi~blankets, artist Hali Heavy Shield has created seven blanket designs, on display as vinyl wall hangings in light-filled meeting rooms in the Saddletowne Library at the Genesis Centre.

Heavy Shield, also known as Nato’yi’kina’soyi (Holy Light that Shines Bright) is a member of the Kainai (Blood) Tribe of southern Alberta, but she has ties to this part of the city, having lived in the nearby community of Martindale in a Treaty 7 Urban Indian Housing Authority residence as a teen. She went on to work as an educator and literacy activist and is a co-founder of the Kainai Public Library, the first public library on an Alberta First Nation reserve, earning her a YWCA Women of Distinction Award.

Now a PhD student at the University of Lethbridge, Heavy Shield has turned to the visual arts as a focus for storytelling and sharing knowledge. The installation at Saddletowne is part of the Calgary Public Library Indigenous Placemaking program. Three of the blanket designs feature colourful patterns, while four depict animals. The design featuring symmetrical, high-contrast loons is particularly eye-catching, and, like the others in the series, carries layers of associations.

The image of a single loon, with its recognizable shape, becomes a simple form, while its splendid breeding plumage is represented with graphic dots and stripes. Joined back-to-back, the double loon motif repeats to form a circle. Half face outward as if serving as protectors, while the other half meet at the centre where the white space between them can be read as an eight-petalled flower, or a compass rose marking the orientation of the cardinal directions on a map. In this sense, Heavy Shield has deftly multiplied the image of the loon, a beloved summer lake dweller usually seen alone or in pairs, into a magical community.

Understanding the power of visual language was a given for Heavy Shield. In childhood, she saw her mother, Faye Heavy Shield, making art daily. Faye Heavy Shield is now honoured as a senior Canadian artist and is this year’s winner of the prestigious Gershon Iskowitz Award, which includes an upcoming solo exhibition at the Art Gallery of Ontario.

Books and storytelling continue to be part of Heavy Shield’s narrative, as she is now set to publish a children’s book, My Grandma is an Artist, with Second Story Press.