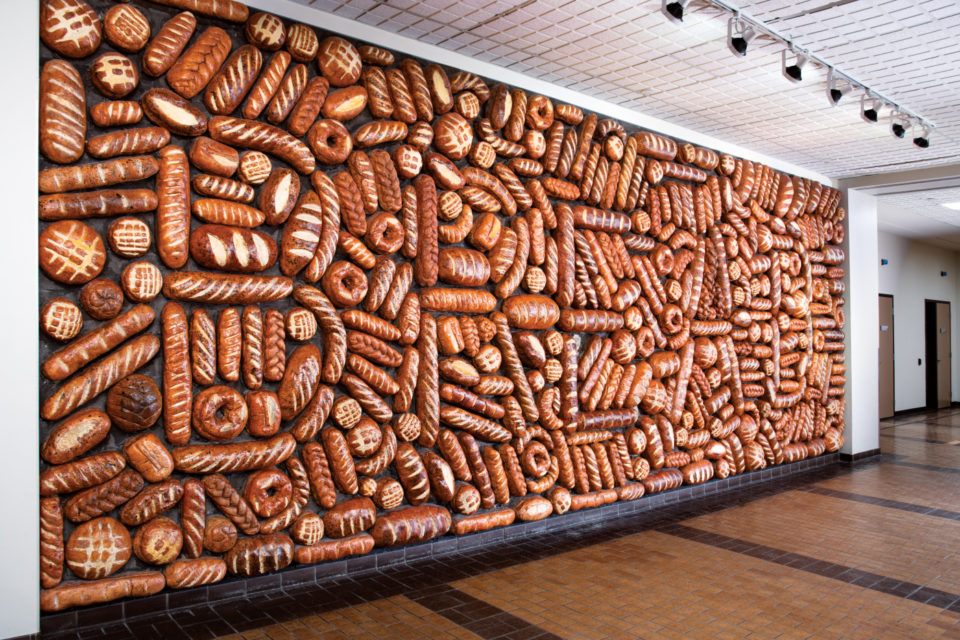 Title: The Breadwall, 1979.
Artist: David Gilhooly (1943 to 2013).
Media: Glazed earthenware.
Size: 10 feet by 40 feet.
Location: Harry Hays Building, 220 4 Ave. S.E.
Note: Breadwall is one of six artworks commissioned by the department of public works’ 1% Program in 1979. Works by Gilhooly are also in the Nickle Galleries collection at UCalgary and at Glenbow.

Does anyone still have a ceramic loaf given out by the late David Gilhooly at the Harry Hays Building in 1979? The irrepressible artist enjoyed overhearing workers on lunch break talk about their mother’s (or grandmother’s, or aunt’s) bread from the “old country” — soft, crusty loaves; rounds sprinkled with sesame seeds; braided holiday breads — while they watched him mortaring his ceramic versions onto the wall. Upon completion of The Breadwall, he happily gave his extra ceramic loaves away.

Gilhooly visited bakeries all over Calgary before making 400 individual loaves out of clay, designed to look as real as possible. Like a baker, he kneaded, rolled and pressed the clay without overworking it. He scored the tops with shallow slashes that could expand in the heat of the kiln and coated them with toppings and glaze.

A self-confessed obsessive regarding work and food, Gilhooly enjoyed making this supersize mural. Speaking about himself with characteristically wry wit, he once said that “his large frame does not permit him to make small or delicate things.”

When Gilhooly received the Harry Hays commission, he was already famous as a prominent player in the free-wheeling, anti-establishment California Funk movement in the 1960s and a catalyst in the Regina Clay Movement that included Canadian stars Victor Cicansky and Joe Fafard. His ceramic world of frogs, a parallel society to ours with remarkable similarities in ancient history, politics and pleasure seeking, was popular in Canada and the U.S. He made ceramic foodstuffs as an extension of the frog cosmos where cookies are used as currency and clay (a.k.a. “frog mud”) is an essential element for transformation.

“Humour is like the handle on the refrigerator door. You have to use it to get all the goodies inside,” Gilhooly once told an interviewer. The humour of The Breadwall is two-fold. Giant loaves of bread that spell “BREAD” is a clever visual pun. But the underlying humour to Gilhooly’s way of thinking was that the humble clay sculpture be a permanent reminder of the everyday life of common folk and the bounty of the land within the halls of federal power, the territory of those he irreverently called “suits.”

Post flood and renovations, The Breadwall, the most enduring, significant public mural by this larger-than-life artist, is thankfully still here for all to enjoy — newcomers, workers and suits alike.