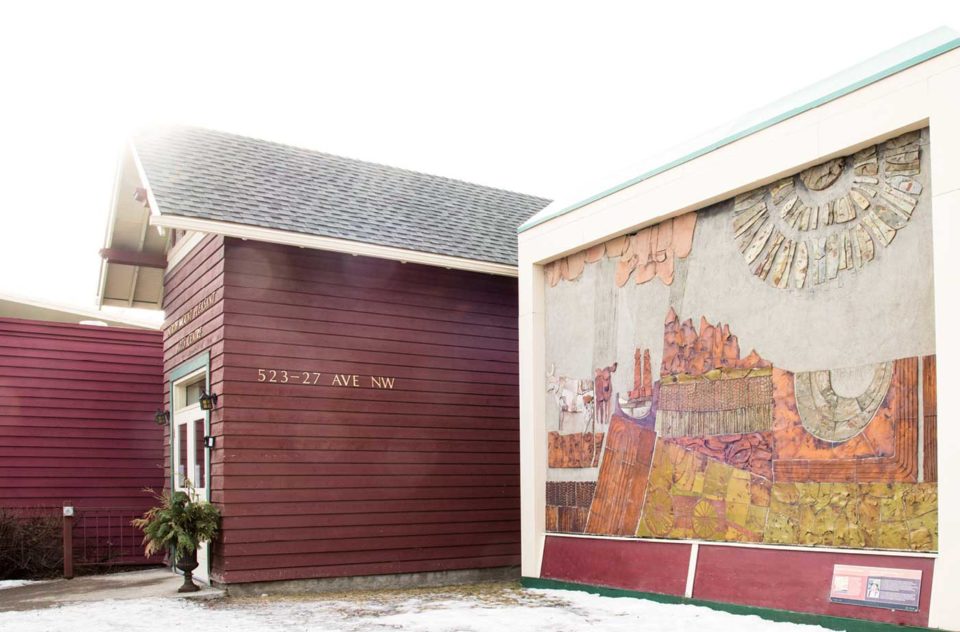 How long can we expect a work of art to last in an outdoor public space? Weather, ownership, development, fashion and changing ideas about relevance each play a part in determining a work’s longevity. In 2006, we almost lost a significant piece to development, an earth-toned mural depicting an optimistic vision of Alberta rich in wheat, cattle and oil, installed on a building at 209 16 Ave. N.E., just east of Peters’ Drive-In. Though the mural was in good shape, the building was slated for demolition to widen the Avenue (part of the Trans-Canada Highway).

Without records, responsibility for the mural was in administrative limbo. Fortunately, the City took an interest and pulled departments together to trace the origin and relocate the work while keeping it within Ward 7. We now know the Municipal District of Rocky View No. 44 commissioned Ed Drahanchuk, one of the most successful Canadian studio potters in the mid 1960s and 1970s, to make Alberta Foothills Morning for its 16th Avenue N. office building. The property was later transferred to the City of Calgary as the city limits expanded.

Calgary-born Drahanchuk graduated from the Alberta College of Art (now Alberta University of the Arts) in 1963, the same year he and his wife Ethel founded Design Associates with sculptor Bob Oldrich. Their forte was independent studio design for corporate and architectural settings. In 1968, the Drahanchuks moved to a new home and studio in Bragg Creek designed by Calgary modernist architect, Gordon Atkins. That year, Cheech Marin (who would go on to become famous as one half of the comedy duo Cheech and Chong) came to their door asking for a job as a studio assistant and found the Drahanchuks working on a tile mural.

Alberta Foothills Morning expresses the energy of the ’60s with a touch of humour. Drahanchuk created textures in clay and used the concrete background to compose the landscape. Scratches in the concrete indicate a rain shower, while the sun shines on recessed, glazed grains of wheat. Unglazed areas define an old buckboard farm wagon in the foreground and simple appliqué clay shapes depict oil derricks in the distance. Amid the stamped hoofprints in the muddy paddock, Drahanchuk planted his own boot.

On a fall morning in 2006, traffic on the Trans-Canada was diverted while the entire 12-foot-high cinderblock wall that the mural was adhered to was cut off the building, sandwiched in a steel support system and lifted onto a flatbed. It was moved 20 blocks to its new home at the North Mount Pleasant Arts Centre, where it continues to be appreciated by the community, especially the children and adults who take part in the active ceramic studio.