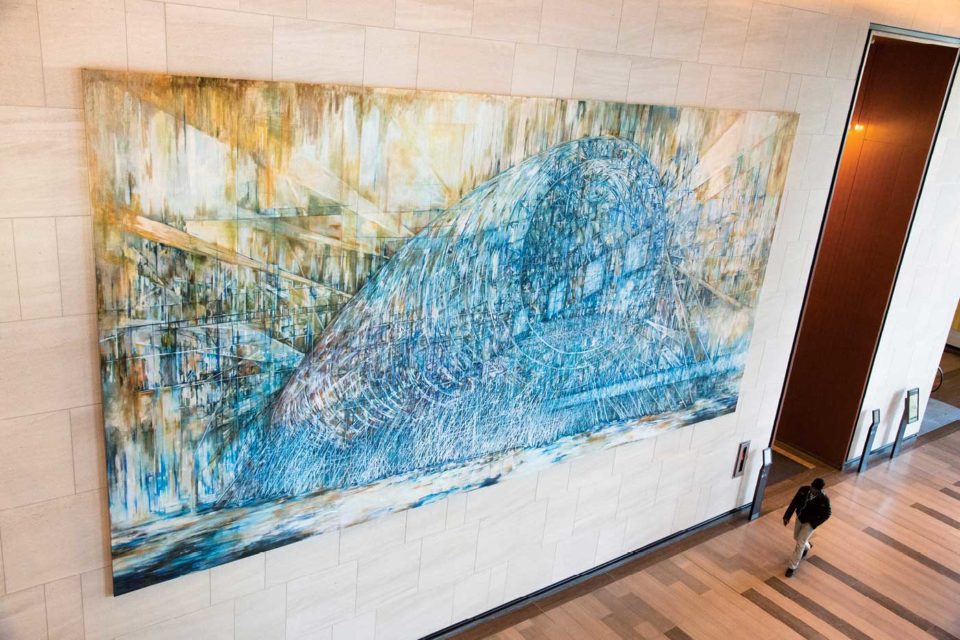 Fine blue lines suggest the skeleton frame of a vintage airship that is still under construction, yet already appears to hover. Intricate scaffolding and mooring ropes support the semi-transparent cylinder within a vast hangar. Shards of golden light fracture the airy architecture and suffuse the space with a hazy glow. The exercise in perspective is intricate and atmospheric; it would appeal to admirers of Giovanni Battista Piranesi, the great 18th-century Italian printmaker.

With chalk, pastel and graphite, artist Alison Norlen drew on a canvas so large that she had to deliver it rolled up and then stretch it onto an aluminium frame in the atrium of Calgary City Centre, a downtown tower that opened in 2015. Within the expansive lobby space, the immense scale and detailed surface of the drawing combine to create a dizzying effect. Norlen was commissioned to make this large-scale work based on a small watercolour, related drawings and her considerable track record. Based in Saskatoon where she teaches at the University of Saskatchewan, Norlen has works in collections across the country, from the National Gallery of Canada in Ottawa to The Art Gallery in the Esplanade Arts & Heritage Centre in Medicine Hat.

Her source material for Glimmer (Zeppelin) includes a photograph of a blimp being built inside the Goodyear hangar in Ohio, but her dreamy image is nuanced, inviting you to slip between places and time. Travel back to the early 20th century when people marveled at the promise of comfortable air travel; fast forward to 1937 when the transatlantic voyage of a different zeppelin, the hydrogen-filled luxury Hindenburg airship, ended horribly, bursting into flames as it attempted to land. Caught on film, the first footage of a major transport disaster was shocking and, 82 years later, the image retains remarkable power in our collective memory. This drawing captures the zeitgeist of optimism around the potential of technology but can’t be read without a sobering sense of premonition. Memory permeates the ghostlike image; you might catch a glimpse of human folly through the cracks.