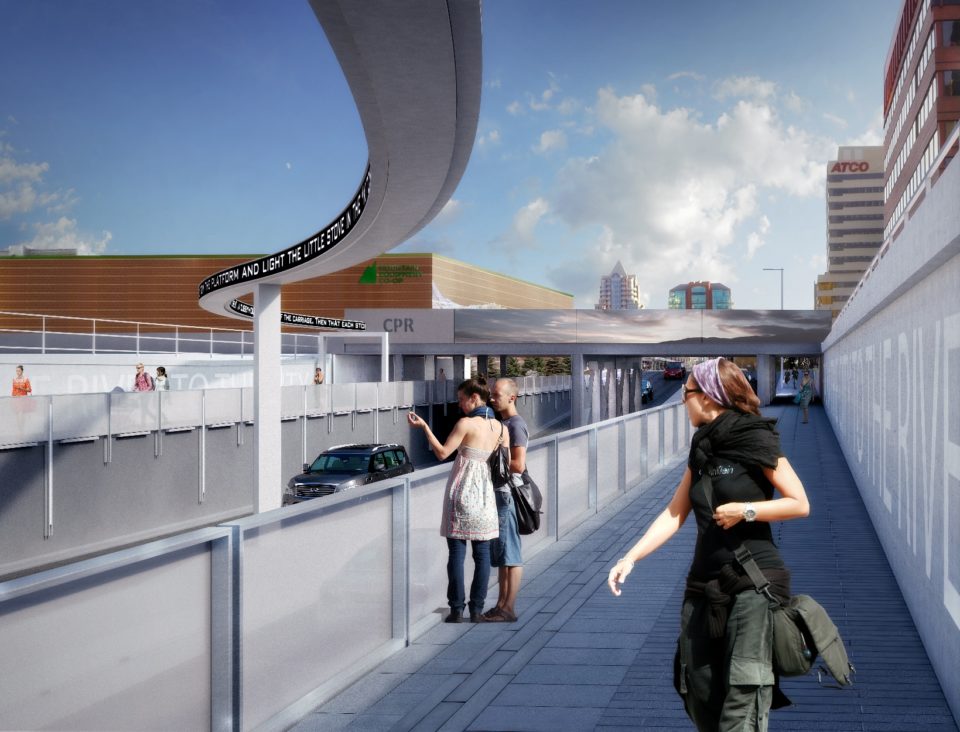 If you’ve used the 8th Street S.W. underpass recently, you might have been surprised to see people standing around on their phones and looking up.

It’s because the art installation there, called the Calgary Scroll, has a feature that allows pedestrians to text a keyword to the installation using information found on a nearby plaque, which then brings up snippets from turn-of-the-last-century Calgary newspapers related to the word on the scrolling LED screen.

The Calgary Scroll, installed in December 2016, was an integral part of the underpass design from day one, says Ben Barrington. He is program manager for Centre City Implementation, which handles the renewal of the downtown underpasses. “One of the things we wanted to do was to make them into places and incorporate public art,” says Barrington. “Rather than doing a design and putting a piece of public art in the underpass, we built teams of designers that included the artist at the beginning, so the artist is part of the design team.”

Toronto artist David Rokeby, the man behind the artwork, says the inspiration for the piece came from spending time on site as well as research he conducted to learn more about the area’s history.

“When I hung out in the space, I realized several things. You spend a considerable amount of time below grade in this curious space we ended up calling an urban room,” says Rokeby. “I also noticed that no one looked across. Everyone was staring stonily straight ahead, as though this was a stretch of the city to endure. Those were my starting points.”

Rokeby found that the nearby parking lot between 9th and 10 Avenues S.W. was once a Canadian Pacific Railroad yard, which opened new artistic directions for him. “That underpass is there because of the old existing rail yards. The CPR really dominated the city physically. It was very large relative to the size of the city early on.”

This history led to the s-curve shape of the piece which is reminiscent of a set of rails crossing over another set. That shape also solved the problem of getting pedestrians to look across the underpass rather than straight ahead. The idea for the LED screen that spans the curve to display bits of old news stemmed from Rokeby’s fascination with history in newer places like Calgary.

“I’m interested in the way history is present in the city. It’s so different in North America compared to Europe. There is so little sense of history on the street,” he says. “We tend to take a lot of the early buildings down, we do a lot of rebuilding, and we lose the sense of the presence of these past histories.”

“The historical nature of the relationship between the CPR and the city had me thinking a lot about the early days of Calgary. I thought it would be interesting to bring details from the history of Calgary, especially hidden ones, like advertising and odd little pedestrian bits of detail of life in the early days, and have those stream along the sign.”

Artist David Rokeby nicknamed his artwork “The Dead C Scroll,” a play on words alluding to the notion of a historical document containing old information, with the ‘C’ in this instance being Calgary.

News From the Past

Here are some of David Rokeby’s favourite bits of newspaper found while researching the city’s history:

Constable Barker got hold of six one gallon rubber bottles full of whiskey thrown off the east bound train this morning. Acting Mayor Orr in presence of the chief and constable Barker emptied the fluid in front of the old town hall this afternoon.

From the Calgary Weekly Tribune, February 27, 1886

A somewhat serious shooting affray took place on Thursday night at a dance going on at Jack Ellis’ old restaurant. The participants were one John Bertrand, otherwise the ‘Black Kid’, and Hank Forbes… It appears that there was a scarcity of partners on the dance floor, and Forbes took umbrage at the Kid, who insisted on being ‘on the floor’ every time.