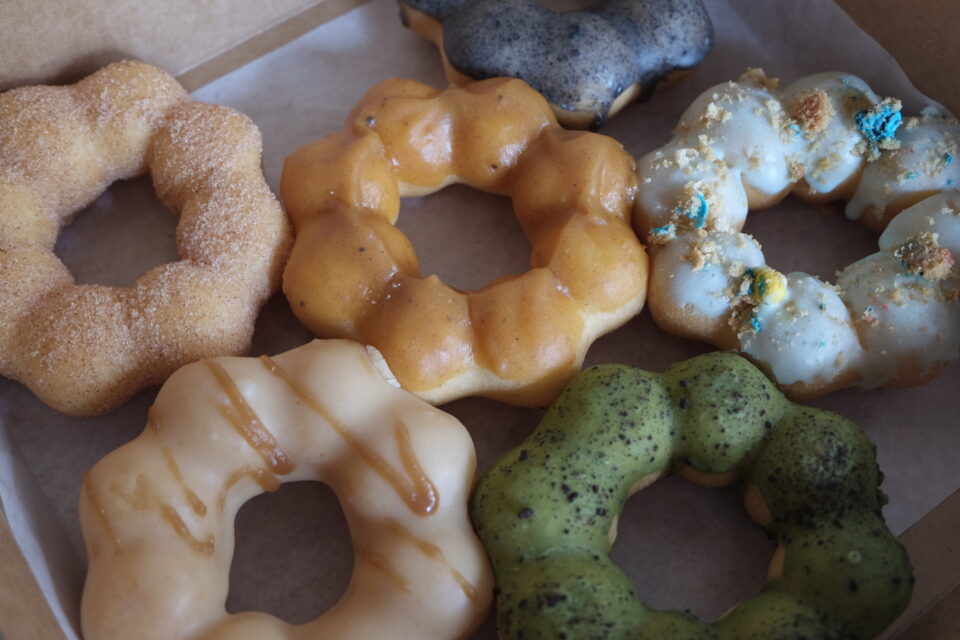 Judging by the number of new doughnut places that have opened in the city recently, Calgarians love their deep fried desserts. But if you’re looking for something different than the usual jelly-filled or cake-style doughnuts, there’s Amaido Cafe, which serves up mochi doughnuts in a variety of Asian-inspired flavours.

Co-owner and founder Melissa Luu was inspired by her travels to bring this unique and popular dessert to the city and opened Amaido last January. Made fresh daily and selling out almost every day, the soft, pillowy rings have a texture that falls somewhere between classic doughnuts and traditional mochi, a Japanese dessert usually made from rice flour.

“When we first started, we used pure rice flour and it was extremely dense and very chewy,” says Luu of her original dough. While those original mochi doughnuts were fully gluten-friendly, Luu says customers didn’t love the extremely chewy texture and the doughnuts hardened faster because rice absorbs air. That’s how she found herself changing her recipe midway through.

Now, her doughnuts are made with a mixture of rice flour, wheat flour and tapioca flour, which still gives them the characteristic chew of mochi, but more subtly than before. While still fried, these mochi doughnuts are perfectly light and airy and not oily.

The variety of flavoured toppings and glazes are all made with organic, lactose-free milk. Six doughnut flavours rotate weekly, with options like Thai tea, caramel miso, matcha, mango, black sesame as well as chocolate, cookies and cream and cinnamon sugar.

Choosing to open in Chinatown was an obvious choice for Luu. She is no stranger to the neighbourhood nor trendy treats that are instantly Instagrammable — Luu also owns the local toy shop Urban Pop Shoppe and is one of the co-founders behind Uzu Taiyaki, home of the Japanese fish-shaped waffle cone with ice cream.

Amaido also serves home-made ice cream in different flavours like lychee jasmine and Viet coffee that can be scooped in-house into mochi waffle cones or sold in take-home pints. You can also find coffee, lattes and iced teas on the menu to enjoy with your mochi doughnuts.

Individual mochi doughnuts are $2.75 each or six for $15.75. There are limited quantities daily. Online pre-orders are available for Monday to Thursday pickup. Walk-in and takeout only Friday to Sunday. Gluten-friendly doughnuts are only available on Saturdays.