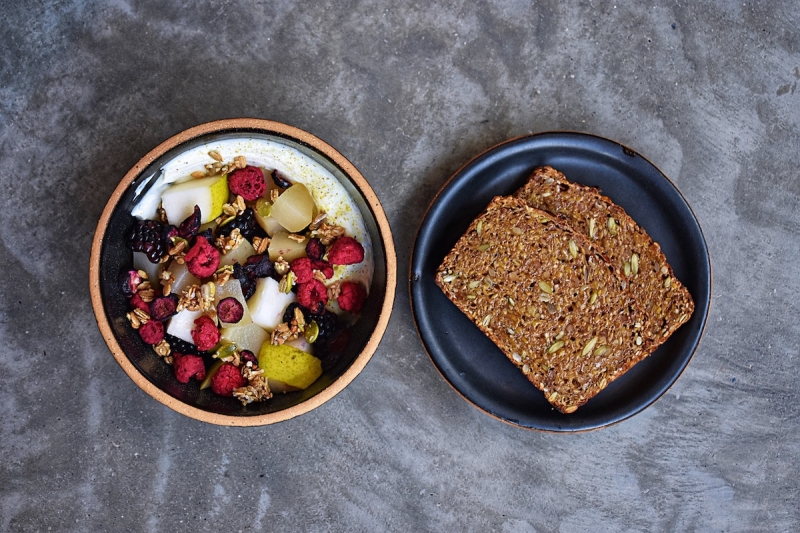 The fresh fruit and sprouted seed toast at Lukes restaurant in the new Central Library. Photograph by Sarah Tubman.

The new literary hub officially opened on November 1 and is filled with awe-inspiring architecture and cool features that include a new cafe and a restaurant. Gareth Lukes of Lukes Drug Mart and chef Eric Hendry (who was most recently the executive chef at Bar Von Der Fels) teamed up to bring the two eateries (both called Lukes) to the new library space, providing some welcome sustenance and caffeine for hungry readers.

Designed by Frank Architecture and Interiors, the casual yet sophisticated spaces pull inspiration from trips the two owners have made to places like San Francisco, Copenhagen, New York and Paris.

To access Lukes’ exterior restaurant, head outside to the west side of the building. The cafe and restaurant are both open daily, but the restaurant has longer hours that start earlier and run later than the library most days. During the morning, choose from breakfast options like a breakfast sandwich, fresh fruit and sprouted seed bread, chia pudding, oatmeal and porridge with topping options like apple compote, coconut flakes, freeze dried berries, cinnamon raisins, maple syrup, Mast Brothers chocolate and more. (The oatmeal and porridge are all-day options.)

The rest of the day, restaurant food options include daal, brown rice congee, kale risotto and three sandwich options including a veggie sandwich and The Gareth sandwich made with turkey pastrami, tomato, cucumber, lettuce and cheddar cheese on marble rye bread. The sandwiches aren’t listed on the menu board above the counter, so look for the paper menu to see your options.

Along with coffee, the restaurant serves some unique drinks including a matcha shakerato, a yuzu and rosemary lemonade, turmeric tonic and a h’oat’chata made with maple syrup and oat milk. And starting on November 23, guests will be able to order natural wine, draft beer and cocktails in the restaurant as well.

For those spending some time inside the library, be sure to pay a visit to the interior Lukes cafe. Located on the library’s first floor just before the children’s library, the cafe area has tons of seating flanked by potted plants from Plant that you can actually buy. Grab a coffee (featuring Victoria-based Bows & Arrows Coffee Roasters) to enjoy while you wander the building or sit down for a pastry by Manuel Latruwe or Pretty Sweet. Lukes also moved one of its soft serve machines to the new cafe and is kicking its time in the library off with strawberry and blueberry flavours that can be enjoyed on their own or swirled together. Soft serve flavours will change monthly.